Fascism, fundamentalism, and the left

Looking at the relationship between fascism, islamism and class, and the response of the left. Originally published in January 2011.

Since the May General Election, we have been witnessing the slow demise of British fascism as we know it. The British National Party’s spectacular failure tore open divisions and animosities that had been long brewing below the surface. Resignations, sackings, splits, and general disorder have turned the party in on itself. At the same time, the new government’s austerity measures and the fight back they have provoked has pushed racial politics to the sidelines, as people once more awaken to the realities of class war.

And yet, the English Defence League continues to grow. Part of this is down to the unique position it finds itself in. Not being a political party, it cannot suffer a decline in electoral fortune. Not being a social movement, they needn’t worry about grassroots organising. All they have to do is call demonstrations, and people will come. They offer an outlet for neo-Nazis, football hooligans, loyalists, and others just looking for a fight and a flash point, and as long as that is the limit of their ambitions they remain immune to the political factors which brought down the BNP.
The other side of the EDL’s success is down to political Islam.

I was tempted to say the “rise” of political Islam, but that wouldn’t be strictly true. Being an extreme minority position whose ideals are alien to most people on this island, it has no base with which to build a broad-based movement for political reform, nor to galvanise the populace into revolution. It will remain the preserve of a tiny band of lunatics espousing abhorrent views, and all that will change is how much attention they are given.

Unfortunately, at the moment, the answer to that is “a lot.” With stunts such as burning poppies on Armistice Day, and threatening to march through Wootton Bassett, groups such as Islam4UK and Muslims Against Crusades can stir up more than enough public outrage to make themselves seem important. The government’s use of the SAS to protect shopping centres, and the continual playing up of the terror threat, likewise adds fear to that outrage. And this feeds the atmosphere and sentiments that keep the EDL going.

Despite what it says, the EDL does not exist merely to “peacefully protest against militant Islam.” Chants such as “we hate Pakis more than you” and stunts like throwing pigs’ heads at mosques tell of overt racism and deliberate provocation. At its demos, supporters who break police lines regularly invade and attack Asian communities. For the EDL, the distinction between ordinary Muslims and militant Islamists does not exist.

At the same time, it cannot be denied that the message of clerics such as Anjem Choudary played a part in their rapid expansion. Founder Stephen Lennon has spoken before of how “preachers of hate such as Anjem Choudary have been recruiting for radical Islamist groups in Luton for years” whilst “our government does nothing.” This led to him and others deciding to “start protesting against radical Islam, and it grew from there.”

But this isn’t just a one-way process. It has been noted on more than one occasion that the EDL attacking Muslims provides “constituent parts” for those who would radicalise vulnerable people to encourage them to “go through the gateway towards being radicalised.”

The role of class is not insignificant in this process. Fascism grows by feeding off anger and feelings of marginalisation amongst the working class, and offering a solution that turns one section of the working class against another. Islamism is no different. The only difference is that one ideology is appealing to the white working class with patriotic and nationalist sentiments, whilst the other is appealing to the Muslim working class with religious sentiments. The antagonism between the two strands actually helps to form a symbiotic relationship. The two opposing ideologies feed off one another.

The failures of the left

Unfortunately, the anti-fascist movement has failed to recognise the implications of this. In particular, groups such as Unite Against Fascism have adopted a very black-and-white approach to this issue which has played into the EDL’s view that all those who oppose them are “in bed with radical Islam.” It has also resulted in accusations of “Islamophobia” being hurled about in a way that made the entire movement look ridiculous.

For example, back in June the EDL announced plans to march on Tower Hamlets in opposition against what UAF called “a peace conference, organised by a Muslim charitable foundation and aimed at building understanding between Muslims and non-Muslims.” It emerged that this was in fact an event being organised by the Islamic Forum of Europe, “a virulent form of political Islam that is fascistic in nature like Jaamat Islam and verges on the anti-Semitic and is very exclusivist and undemocratic.”

That description comes from a statement issued by a number of local groups, including Muslim and Bangladeshi organisations, in opposition to the EDL’s “demonstration.” However, in taking such a position – “against fascism in all its colours” – the groups behind the statement were accused of being racist and in league with fascists.

Such an attitude will be familiar to anybody who has dealt for long enough with UAF and the Socialist Workers’ Party for whom they operate as a front group. Five years ago, human rights campaigner Peter Tatchell criticised UAF for inviting Sir Iqbal Sacranie, then head of the Muslim Council of Britain, to speak at one of its events. He dubbed it “a sad betrayal of liberal, non-homophobic Muslims,” saying that “Sir Iqbal’s homophobic views, and the MCB’s opposition to gay equality, echo the prejudice and discrimination of the BNP.” For these comments, he was accused of “claim[ing] the role of liberator and expert about Muslim gays and lesbians” and of being “part of the Islamophobia industry.” Clearly, absurdity knows no bounds.

The problem is that those afflicted by such a narrow perspective are currently the most influential in the broader anti-fascist movement. UAF is able to draw in the support of students and young people on the sole basis of vague, anti-racist politics, whilst keeping class analysis out of the worldview keeps funding from mainstream organisations coming in. Thus, they are able to simply marginalise and ignore tricky debates such as this when it suits them.

Hope not Hate have, especially of late, shown a lot more political savvy in this regard. They recognise that “hate breeds hate,” and that “the EDL breeds Islamic extremism and Islamic extremism breeds the EDL.” This is certainly a better position than UAF’s. However, ever the statists, they delegate responsibility for “mak[ing] a stand against extremism on both sides of the divide” to “the Government.”

They, too, ignore class issues and reduce the matter to one of “extremism.” In essence, that those who diverge too far from the narrow spectrum of mainstream politics must be taken care of by the state.

The problem with this, as the left should be all too aware, is that under such auspices the definition on “extremism” goes beyond violent fascists and religious lunatics espousing holy war. Forward Intelligence Teams and police “evidence gatherers” are becoming ever more commonplace on demonstrations of all kinds, particularly those in opposition to the cuts. Their job is to gather footage of “domestic extremists” – that is, those who take to the streets to protest, picket, and make their voices heard.

By this definition, trade unionists, environmentalists, anti-war activists, and anti-fascists are extremists as much as the EDL and Muslims Against Crusades. As such, asking the government to “make a stand against extremism” sets a very dangerous precedent indeed.

Even if the English Defence League wasn’t a fascist organisation grounded in loyalism and hooliganism, it wouldn’t be an effective vehicle to challenge political Islam. It is a purely reactionary movement, more concerned with feeding right-wing anger than challenging the radicalisation of Muslims.

They don’t organise within Muslim communities. They don’t counteract the religious arguments of the Islamists with a class argument to address the real issues that affect and concern Muslims and non-Muslims alike. They don’t stand in solidarity with those who oppose the extremists in their own midst. And they don’t distinguish between issues of religious bigotry from those of religious freedom in order to distance themselves from the far-right and racism.

This is the approach taken by militant anti-fascists, who counter the propaganda of the BNP and EDL with a working class perspective. We argue from this point of view precisely because it is this argument that both the far-right and the mainstream media have worked to obscure, and to twist in favour of a racial or national interpretation of the world.

Likewise, for working class Muslims there is an enormous effort to paint the world around them as defined by religion. The Islamic far-right talks of holy war in the Middle East, ignoring the fact that capitalism and the control of markets is the root of conflicts in Iraq and Afghanistan. Not to mention the fact that it is poor Arabs and Muslims who are dying and being oppressed, whilst the wealthy are able to serve or integrate into the class of people who benefit from the war. They certainly don’t mention how the regimes they seek to implement are, elsewhere, crushing workers’ movements as readily as those for women’s and LGBT equality.

The aggressive ultra-nationalism of the EDL only pushes class further off the agenda. Their approach allows community “leaders” – “moderate” as well as Islamist – to shore up their own position with the threat of outside invaders. It creates a sense of defiance that only exacerbates the division of the working class into supposedly homogenous “communities” based on race or religion, allowing the ruling class and various other interests to continue playing us off against one another.

Not only does such a situation make it harder for militant organisation against the various shades of far-right, it also thus makes it harder to organise around attacks on our class. The current climate of austerity is just one example, and questions of race and religion don’t merely distract from the matter at hand but turn us against one another whilst the ruling class wreaks havoc from above. This is how fascist regimes came to power in Europe in the 1930s, but it is also how the totalitarian regimes of the Middle East keep class antagonism crushed under-foot. A populace mobilised in the cause of holy war, or contained by a climate of fear instilled by strict religious laws, necessarily finds it difficult to see anything other than faith as the prime mover of world affairs.

In response, what we need is militant working class self-organisation. Grassroots mobilisation across all sectors of the working class, in the first instance, galvanises people to take a stand against threats such as fascism and Islamism.

But it is not just about defending the areas we live in from the forces of reaction. By organising in this way, we see the power that ordinary people can have, collectively, to make a difference. This helps to rebuild a genuine sense of community – based on vicinity, rather than faith or ethnicity – and the further organisational strength that this brings. Not only does this make anti-fascism far more effective, but it shores up our position in the broader class struggle.

Phil Dickens is an anarchist, anti-fascist, and trade unionist from Liverpool, England. He writes regularly about class struggle, racism, fascism, and imperialism, and his blogs can be found at http://truth-reason-liberty.blogspot.com and http://propertyistheft.wordpress.com

The Arab Spring's wave of protests were followed by counterrevolution. The old regimes returned and directed their repression both towards the…
Image 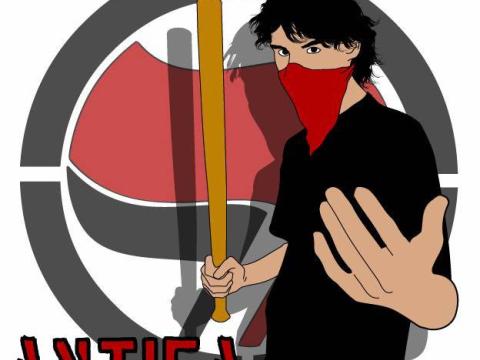 Why no platform is still relevant, and the trouble with liberal "anti-fascism"