Article on the stranglehold that debt has on working class communities, with some suggestions on resistance.

The boom of the 1980s which allowed the Thatcher government to claim to have delivered on its promise of prosperity was financed in part through deregulation of the City and financial services industry and by an increase in the availability of personal credit. Deregulation allowed the City to take advantage of developments in information technology and facilitated Capital's plans to roam the world in search of new markets by allowing it to write cheques against future exploitation.

The expansion of personal credit served a different purpose. Until 1982, terms for consumer credit lending were controlled by the state. The lifting of these controls was followed by relaxation of controls over building societies to allow them to market a wider range of financial products and to increase the proportion of funds raised from sources other than investors. As a result, more people than ever before had access to credit and to an increased range of consumer goods. As Elaine Kernpson, a researcher for the Joseph Rowntree Foundation describes it

"Credit provided a means of smoothing the peaks and troughs of daily living expenses for those who lived on incomes that were both low and liable to fluctuations, depending on the availability of overtime or shift working. People also used credit to tide them over between jobs... Credit also provided a lifeline for people who were unable to pay their bills - especially if they were being threatened with court action or disconnection from their fuel or water supply."1

For those without access to licensed or regulated sources of credit, loan sharks and unlicensed lenders filled the gap. Fuel and water utility privatisation and the introduction of first the poll tax and subsequently the council tax conspired to increase the debt burden or low-income households. As availability of social housing diminished with the drastic reduction in council building programmes, the introduction of the Right to Buy scheme and Rents to Mortgages, combined with the hyping of low cost mortgage options led to an increasing privatisation of low income housing.

The onset of recession in the 1990s led to a massive increase in personal debt and a rapid rise in mortgage arrears and repossessions. Since 1990, approximately 300,000 households have lost their homes through repossession proceedings. Debt - whether mortgage or rent arrears, fuel debt, credit card debt or unpaid council tax - has become a constant destabilising factor in working class life. We hide from bailiffs, stuff unopened letters from creditors in drawers and hope our non-attendance on county court summonses will make the dread of repossession go away.

As the economists Werner Bonefeld and John Holloway note

”The boom of the 1980s acted as a neutralising agent as it helped to co-opt parts of the working class to the project of prosperity... Poverty, unemployment and marginalisation of superfluous labour power coincided with prosperity. The boom vindicated the monetarist imposition of market equality. The decomposition of resistance to austerity was based on poverty, a poverty which was the mirror image of a credit driven prosperity. in the face of poverty, prosperity broke the hornogeneity of resistance against austerity ... The threat of unemployment was reinforced by the threat of a forcible collection of unpaid debt, eviction and thus homelessness and poverty. The disciplining power of debt and precarious work cannot be overestimated."2

That "disciplining power of debt" overshadows all our attempts to forge a new politics of working class resistance. The fear it engenders disrupts solidarity and community. Working class life has become increasingly privatised, and the burden of debt is a deliberately engineered cause.

It follows, then, that if we want to rebuild working class solidarity, we have to start with where we are, and the problems we face, rather than attempt to build a politics based on an idealised notion of working class life - we have to reforge class identity and politicisation around the question that holds us back - the question of debt.

In the struggle against the poll tax real steps were taken to build active community groups capable of tackling real issues thrown up by the non-payment campaign as it came to root itself in daily life. Anti poll tax unions were able to provide legal advice in support of non-payment, both as leaflets and through immediate representation and support. Direct action was taken against enforcement procedures, through physical disruption of court proceedings, to monitoring and physical harassment of bailiffs.

When the Tories caved in, the anti-poll tax unions faded away. The practices of that period though should give us some insight into how we can re-establish a notion of active community resistance today.

Enforcement procedures for all forms of personal debt are broadly similar. A first step to resistance would be to distribute to all households in a given area, advice and information about rights with regard to enforcement. More importantly, the provision of such information ought to allow a point of contact for anyone willing to get involved in a campaign against working class debt in a particular area and the establishment of telephone trees etc. Local groups could be set up along similar lines to the original anti-poll tax unions, to co-ordinate information, hold advice surgeries etc. and to monitor the various enforcement strategies pursued. Anti-debt groups could seek to offer advice and help at county and magistrates courts and look to whether direct action could effectively prevent enforcement proceedings going ahead. Local groups could compile details of bailiffs firms active in the area, and monitor their movements with a view to preventing them recovering against any household within that area Bailiffs offices and cars could be targeted for direct action. Bailiffs who live in working class communities could be doorstepped by "anti-bailiffs" and be made aware of the consequences of continued anti-working class activity and parasitism.

In the longer term, groups organised around anti-debt activities could co-ordinate political pressure and harassment such as to push for debt amnesties for particular households, estates etc. Those who profit from our poverty - whether they be banks, pawnbrokers, fuel companies etc. need public outlets to operate effectively and they need therefore public "co-operation" to be able to carry out their work effectively. If that "co-operation" were withdrawn, life might cease to be so easy.

The expansion of credit access, and hence, the increase in working class debt, has made insecurity a permanent pervasive threat to our confidence as a class. Whenever we think of going on strike, or quitting a job we can't stand any longer, the dread of debt, of repossession, disconnection, looms over us and we lower our heads once more. Collective resistance ought to start then with what holds us back. Jubilee 2000 has organised a campaign of the great and the good against Third World debt. All power to them. What we need in order to overcome the privatisation of life which is the legacy of the Thatcher/Major years and from which New Labour intend to profit, is a militant direct action campaign against those who leach and profit from us every day.

More and more of us wake up in the middle of the night in a cold sweat over mortgage arrears, unpaid rent, fuel bills, court summonses etc. If our politics is to have any meaning it has to show how we can resist the miseries and fears of everyday life. A campaign against working class debt, based on the lessons and tactics of the anti-poll tax movement, would provide a way of rebuilding practical solidarity within our communities by tackling head on that which usually acts as an atomising obstacle to the forging of such solidarity. This article is intended to at least raise the issue and to suggest that with imagination and information we can build such a campaign. In the box below is a list of a few of the many companies who profit from our debts. Give them hell.

The expansion of credit access, and hence, the increase in working class debt, has made insecurity a permanent pervasive threat to our confidence as a class. 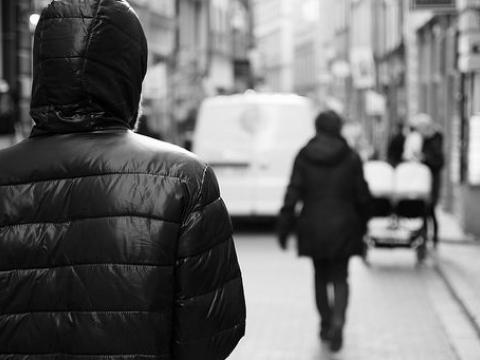 Article in Black Flag #220 (2001) on David Shayler, the former MI5 agent and his cosying up to liberal reformists.