A short biography of Natan Futerfas, Esperantist and anarchist

Natan Futerfas was born on 28th July 1896 in Łódź in Poland within the Russian Empire. The son of a Jewish merchant, he lost his father, a relatively young man, who died suddenly on a business trip to Melitopol in the Crimea, at the age of six. As a result his family, which numbered his mother Cecilja and two sisters was plunged into poverty. Fortunately his maternal uncle came to their aid and Natan was able to continue his education. He progressed to a gymnasium (high school) but through his own reading of scientific and philosophical literature saw that the education provided by the gymnasium was inadequate.

He quit the gymnasium at the age of fifteen and continued to study independently. After two years he got a job in a big Łódź firm. Whilst in the gymnasium he learnt Esperanto from his friend Iakov Shapiro, who was carrying out agitation there. At first he was sceptical but by the end of 1911 had learnt the language. In 1918 he became active in the Łódź Esperanto Society and devoted all his free time to studying Esperanto. He was fluent in Russian, Polish, German and English. He also became a convinced anarchist communist around this time.

He graduated in Esperanto studies at the Moscow American Institute in 1917 and then taught there for three years. By 1920 the Institute was going through hard times, especially with lack of food and heating. The following year it finally collapsed.

During a meeting of the Moscow Esperanto Society in 1918, the Tutrusland Esperantista Federacio (All Russia Esperantist Federation-OKTEF) was founded with Futerfas as one of its most active members. OKTEF was led by Ernest Drezen (1) who advocated a strong centralised organisation as opposed to the federalist ideas of Futerfas and his friends. Futerfas was of course informed by his anarchist ideas and was strongly critical of Drezen’s authoritarian approach. Drezen and Futerfas clashed during the Third All Russia Esperanto Congress in 1921, and Futerfas left the congress. Drezen founded the Sovetlanda Esperantista Unuiĝo – Soviet Esperanto Union (SEU) during the congress with himself as President.

It should be pointed out that Lenin strongly disapproved of Esperanto, according to both his wife Nadezhda Krupskaya and his sister Mariia Ulyanova. Similarly other Bolshevik leaders denounced Esperanto in a dogmatic way, like Bukharin in in 1920 and Zinoviev in 1923. The latter in a speech to Party functionaries in Petrograd criticised Esperanto for its simple-minded approach to the problems of language and nation. Despite this repudiation Drezen produced An Attempt At A Materialist Contextualisation of the Problem of an International Language in 1922. Futerfas greeted this with derision, commenting that against all odds Drezen “has against him all Marxist orthodoxies”.

During the post-Civil War years Futerfas worked as a clerk in insurance in various lowly positions as accountant, supervisor and treasurer.

In 1922 Futerfas was one of the founders of Nova Epoka (New Age) along with Nekrasov and Demidjuk. He met up with the Frenchman Eugene Lanti, president of Sennacieca Asocio Tutmonda (SAT) , a broadbased anational association incluing social-democrats, Communists and anarchists, during his visit to Moscow (see photo). After Nekrasov (2) and Demidjuk (3) agreed to collaborate with Drezen and the SEU he let Nova Epoka.
In 1924 Futerfas, like many other anarchists within the Soviet Union was arrested. He was released fairly quickly but was not allowed to stay in Moscow, and was forced to drop out of Esperantist activity. To his credit Drezen apparently intervened to protect Futerfas thanks to his friendship with Chekist leaders and fellow Latvians like Iakov Peters, Martin Lācis and Jānis Bērziņš.

He was exiled to Samara and then managed to move to Leningrad. He was again arrested in September 1927 for the “preparation and dissemination of anti-Soviet leaflets”. He was sentenced to 3 years of imprisonment. Two years later he was sent to Siberia. He was again arrested for the third time on 18th March 1935 on the charges of “an organised struggle against Soviet State and Party, and for the organisation of members of exiled anarchists in a counter-revolutionary group”. He was again, in the Severny Kraj region, with Arkhangelsk as its capital, regarded as even harsher than Siberia.

He was arrested for a fourth time on 18th February 1937 in Arkhangelsk and charged along with 10 others with terrorist activity and belonging to a Socialist Revolutionary terrorist group. A ludicrous charge as he had never been a member of the SRs. He was also charged with spreading counter-revolutionary propaganda in Arkhangelsk and belonging to a foreign anarchist centre. He was sentenced to death on 23rd October of that year and shot four days later on 27th October 1937.

He features as Futer in the book by Eugene Lanti in his “Is Socialism Built in The Soviet Union?” (1935).

(1) Drezen was accused of setting up a counter-revolutionary Esperanto organisation, of engaging in sabotage and terrorist acts, and of being an agent of the German Nazis. He was shot on 27th October 1937.
(2) Nikolai Nekrasov was shot on 4th October 1938 for being a member of a terrorist organisation.
(3) Grigori Demidjuk was arrested in March 1938 and sentenced to 8 years in the gulags, but was in fact not released until 1955. He lived until 1985.

He features as Futer in the book by Eugene Lanti in his “Is Socialism Built in The Soviet Union?”

A friend sent me scans of the book and its in Libcom's Esperanto section
http://libcom.org/library/%C4%89u-socialismo-konstrui%C4%9D-en-soveto-elanti

I've now translated the book into English and a friendly acquaintance was good enough to format it into html so I could keep most of the information intact. https://reddebreksbowl.blogspot.com/2022/03/is-socialism-being-built-in-soviet.html 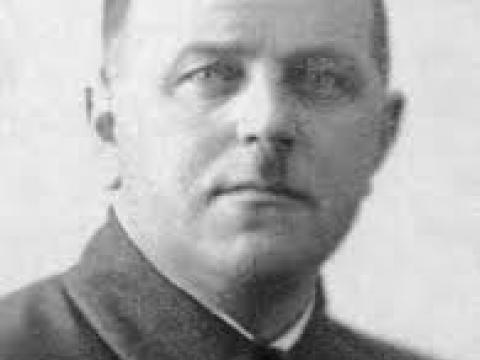