Autonomist Marxist John Holloway writes in praise of the reaction of the working class in Greece against the imposition of austerity measures.

I do not like violence. I do not think that very much is gained by burning banks and smashing windows. And yet I feel a surge of pleasure when I see the reaction in Athens and the other cities in Greece to the acceptance by the Greek parliament of the measures imposed by the European Union. More: if there had not been an explosion of anger, I would have felt adrift in a sea of depression.

The joy is the joy of seeing the much-trodden worm turn and roar. The joy of seeing those whose cheeks have been slapped a thousand times slapping back. How can we ask of people that they accept meekly the ferocious cuts in living standards that the austerity measures imply? Do we want them to just agree that the massive creative potential of so many young people should be just eliminated, their talents trapped in a life of long-term unemployment? All that just so that the banks can be repaid, the rich made richer? All that, just to maintain a capitalist system that has long since passed its sell-by date, that now offers the world nothing but destruction. For the Greeks to accept the measures meekly would be to multiply depression by depression, the depression of a failed system compounded by the depression of lost dignity.

The violence of the reaction in Greece is a cry that goes out to the world. How long will we sit still and see the world torn apart by these barbarians, the rich, the banks? How long will we stand by and watch the injustices increase, see the health service dismantled, education reduced to uncritical nonsense, the water resources of the world privatised, communities wiped out and the earth torn up for the profits of mining companies?

The attack that is so acute in Greece is taking place all over the world. Everywhere money is subjecting human and non-human life to its logic, the logic of profit. This is not new, but the intensity and breadth of the attack is new, and new too is the general awareness that the current dynamic is a dynamic of death, that it is likely that we are all heading towards the annihilation of human life on earth. When the learned commentators explain the details of the latest negotiations between the governments on the future of the eurozone, they forget to mention that what is being negotiated so blithely is the future of humanity.

We are all Greeks. We are all subjects whose subjectivity is simply being flattened by the steamroller of a history determined by the movement of the money markets. Or so it seems and so they would have it. Millions of Italians protested over and over again against Silvio Berlusconi but it was the money markets that brought him down. The same in Greece: demonstration after demonstration against George Papandreou, but in the end it was the money markets that dismissed him. In both cases, loyal and proven servants of money were appointed to take the place of the fallen politicians, without even a pretence of popular consultation. This is not even history made by the rich and powerful, though certainly they profit from it: it is history made by a dynamic that nobody controls, a dynamic that is destroying the world, if we let it.

The flames in Athens are flames of rage, and we rejoice in them. And yet, rage is dangerous. If it is personalised or turned against particular groups of people (the Germans, in this case), it can so easily become purely destructive. It is no coincidence that the first minister to resign in protest against the latest round of austerity measures in Greece was a leader of the extreme right party, Laos. Rage can so easily become a nationalist, even fascist rage; a rage that does nothing to make the world better. It is important, then, to be clear that our rage is not a rage against the Germans, not even a rage against Angela Merkel or David Cameron or Nicolas Sarkozy. These politicians are just arrogant and pitiful symbols of the real object of our rage – the rule of money, the subjection of all life to the logic of profit.

Love and rage, rage and love. Love has been an important theme in the struggles that have redefined the meaning of politics over the last year, a constant theme of the Occupy movements, a profound feeling even at the heart of the violent clashes in many parts of the world. Yet love walks hand in hand with rage, the rage of "how dare they take our lives away from us, how dare they treat us like objects". The rage of a different world forcing its way through the obscenity of the world that surrounds us. Perhaps.

That pushing through of a different world is not just a question of rage, although rage is part of it. It necessarily involves the patient construction of a different way of doing things, the creation of different forms of social cohesion and mutual support. Behind the spectacle of the burning banks in Greece lies a deeper process, a quieter movement of people refusing to pay bus fares, electricity bills, motorway tolls, bank debts; a movement, born of necessity and conviction, of people organising their lives in a different way, creating communities of mutual support and food networks, squatting empty buildings and land, creating community gardens, returning to the countryside, turning their backs on the politicians (who are now afraid to show themselves in the streets) and creating directly democratic forms of taking social decisions. Still insufficient perhaps, still experimental, but crucial. Behind the spectacular flames, it is this searching for and creation of a different way of living that will determine the future of Greece, and of the world.

For this coming Saturday action throughout the world has been called for in support of the revolt in Greece. We are all Greeks.

Originally published in the Guardian

#OWS joins international day of action: We are all Greeks now

‘We Are All Greeks Now’ rallies in Europe, US (Kathimerini)

A wave of solidarity to crisis victims Greeks is sweeping the world, with a special event planned for Saturday afternoon in a number of cities.

More than 10 cities in Europe will see demonstrations under the banner “We Are All Greeks Now”, including Paris and Dublin.

“The people of Greece need the international solidarity and they call for our support. Let’s reply to their call. We are all Greeks,” reads the circular distributed across social media for the rallies that are scheduled to take place at 2 p.m.

A rally is also planned in New York, at the same park that the Occupy Wall Street rallies had started this winter.

Social media groups in solidarity to the Greek people suffering from the austerity measures and the fiscal crisis have also called for action as they express the fear that what the Greeks are going through is going to apply to other people soon, too.

Demonstrations were held in solidarity with the people of Greece on Saturday in many European countries as well as the US. Rallies were organised in Cyprus, France, Germany, Austria, Belgium, Spain, Finland, Ireland, Italy and many more countries…

Reciprocal aid means that we are not ‘all Greeks’; we are of no country, of no nationality; we are what our revolutionary solidarity will gradually make us.

Hi Mark,
I'm writting you because I am a member of a group who have a blog which talks about the Greek crisis. We are from Catalonia (Spain) but we post in english too.
If you want I'll put here the link and you could coment something if you like it and if like our blog a lot you could subscrive, we'll thank you a lot.

Thanks and I hope hearing something from you soon.

Thank you Mark for the good read , i believe what you are saying is correctly compassionately ,true 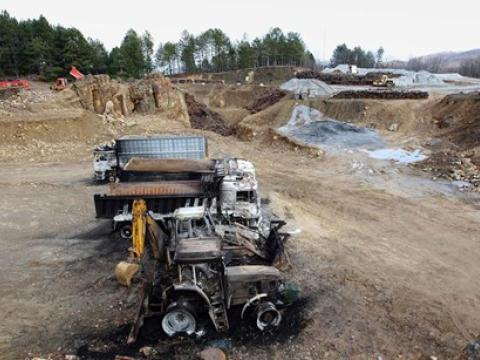 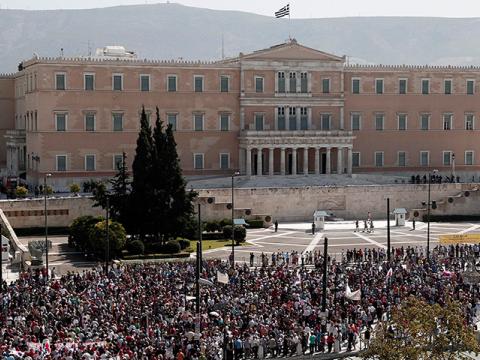 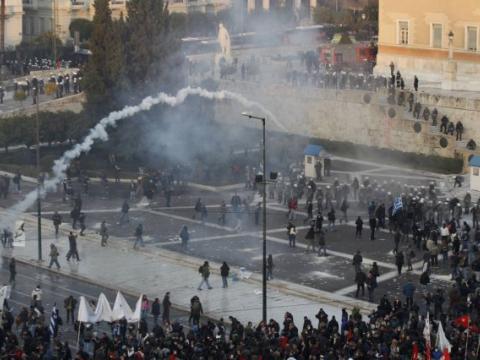 Burdened with debt reloaded: The politics of devaluation - TPTG

Greek communists TPTG take another detailed look at the impact of austerity measures in the country,…