On 21 March it is Russian political prisoner Azat Miftakhov's birthday. Post your photos with #freeAzat hashtag

On 21 March (Saturday) Azat Miftakhov, a graduate maths student at Moscow State University, will celebrate his birthday in prison.

He has been locked up for 14 months on charges arising from a broken window at an office of Russia’s ruling United Russia political party.

Azat is a political prisoner. Wherever you are, please participate in the on-line event to support him: write “Free Azat” on a placard, take a photo, and put it on line with the #freeAzat hashtag. There’s more information about the event here on facebook.

Azat was detained on 1 February 2019, held at first on suspicion of manufacturing explosives, and tortured by the police and the Federal Security Service.

In the first few days of Azat’s detention, the security forces concealed his location from his lawyer.
Azat had just started his mathematical career: his first paper, “On weak convergence of finite-dimensional and infinite-dimensional distributions of random processes”, was published in 2016.

This week a group of students and graduates of Moscow State University and other higher education institutions in the city released a statement that said:

On 21 March, the birthday of Azat Miftakhov, the mathematician, we urge everyone to call for his release.
It’s important that we do this in numbers, and noticeably, since his case will soon be taken to court and he will be sentenced. Azat has already spent 14 months in temporary detention [SIZO], accused of taking part in breaking United Russia’s office window.

If you can, please go out on the 21st on individual pickets, to the Moscow State University or at any safe places. Or, if you can not go out, please participate on line! Take a photo of yourself with a placard demanding that Azat is freed, and put it on social media on the 21st, [with the hashtag #freeAzat].

And whatever you do, say “going” or “interested” to the facebook event, and invite your friends to it. (This is not infectious!) No virus will stop us telling the truth about this absurd case.

Azat’s friends and fellow students believe he is being victimised for his anarchist views. He is on trial with two others, one of whom, Lena Gorban, said in a facebook post this week:

More than two years ago, with several people I know, I broke the window at one of United Russia’s offices. Azat is now accused of having also been with us that evening. Before he was added to our case, a year ago, four people were accused, including some who had taken part and some who had not. At this moment only Andrei Yeikin, who is accused of taking a video film of the attack on the office, and I are still in Russia.

At the forthcoming hearing, three of us will be tried. Like Azat, Andrei and I are accused of hooliganism (article 213.2 [of the Russian criminal code]), which carries a heavy penalty of up to seven years’ imprisonment. From the start, Andrei and I admitted that we were present [when the office window was broken], but that of course does not mean that the case brought against us should stand (essentially, this sort of action should be dealt with as an administrative [misdemeanour], not a serious offence). What’s more, there has been obvious falsification – the use of weapons, which was invented by the prosecutor.

Lena and her friends are collecting for legal expenses and to support Azat. If anyone wants more details about that, please email me at peoplenature[at]yahoo.com. But please, anyway, post your #freeAzat photos and go to the facebook event.

Hey, looking into this a little bit led me to discover http://rosuznik.org/, which I'd not seen before - it looks like a really useful prisoner support tool, and I can navigate most of it via google translate, but I can't run the drop-down list of names through a translator (although I could work out which one Azat is). I don't suppose there's any way that someone could provide a non-cyrillic version of that list of names? 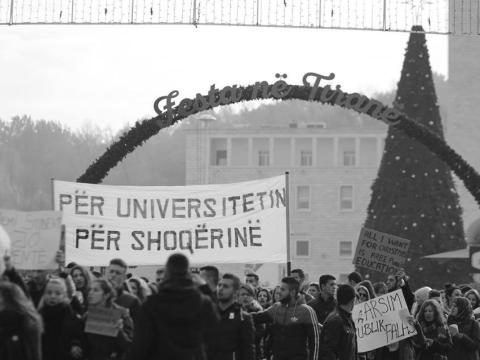 Thoughts on the strike of Albanian students last winter

During the last months of the passing year, a rather important event has unfolded in my home-country…

Communism - Story of the Communist Party - Guy A. Aldred

Aldred's summary of the development of the official communist movement and of its external radical communist critics contains a wealth of detail.