Blockade of the Lilla Karachi restaurant by SAC members

The syndicalist SAC union in Sweden has been campaigning for fair wages for illegal immigrants in the last few months, resulting in thousands of pounds in unpaid wages being paid to migrant workers.

The increasing organisation of illegal immigrants within the syndicalist union SAC have lead to more and more blockades to force the payment of unpaid wages, mainly from employment agencies in the restaurant, cleaning, hotel and building industry. Millions Kronor in unpaid wages have been have been won by the SAC. That these companies and their customers don't want to attract attention to their exploitation of illegal immigrants, in most cases the mere threat of a union blockade has been enough to get the wages paid.

Parallel to this defensive work, the SAC have started organising a list of workplaces where the employer is only allowed to employ members from the syndicalist register, working as a closed shop for illegal immigrant workers, setting wages, six-hour-workdays and democratically electing bosses on the workplaces. At the moment these workplaces are paying untaxed wages for illegal immigrants, exchange students and asylum seekers but the aim is to organise this amongst all forms of precarious labour.

The register has ben dominated by illegal latin american workers, but after theese 2 victorys the SAC hopes 4 a breakthrough with organise the growing amount off illegal indian/pakistan workers in sweden.

But at the Pakistani restaurant Lilla Karachi in Stockholm, the employers tried to set their foot down. The restaurant rejected demands on 80,000 Kronor (£6,150) untaxed wage for a union member and a longer blockade was begun. Since the restaurant is in the same neighbourhood as the Swedish right wing government parties Moderaterna and Centerpartiet, it was soon filled daily with "solidarity eaters" specifically eating their to break the blockade. Leading right wing politicians, led by the daily paper Svenska Dagbladets editorial Maria Abrahansson, were ranting on blogs and in media, calling the blockade an 'mafia tactic' and comparing the SAC with Hell's Angels and Bandits. They have also demanded that police should arrest all the union activists involved and that union rights allowing blockades to be launched be repealed.

After 2 months off daily blockades and the SAC paper Arbetarens explaining that Lilla Karachi owners have threatened the SAC member's family in Pakistan, don't pay the minimum wage in their deal with the social democratic union and have used a fake book-keeper as a witness off innocence in media, the opinion shifted and a lot of the right wing politicians officially regretted their solidarity eating. After a couple of weeks with hardly any evening customers, the Lilla Karachi restaurant agreed to pay out the wage.

The SAC has also started a conflict against McDonalds who have used an employment agency with illegal immigrants for an hourly pay-rate of 33 Kronor (£2.50) when the union deal is 90 Kronor (£6.90). The same right wing politicians called it mafia behaviour but McDonald's paid the salaries after only a week off conflict.

So far, the syndicalist register has been dominated by illegal Latin American workers, however, its hoped that these two victories will be a breakthrough for the SAC in organising illegal south Asian workers in Sweden.

One thing that needs to be said about this is how scared the employers are of us now. Lots of different locals of SAC have had an easy time because the increase in activity lately, blockades, strikes, wildcat actions etc. The enemy are really licking our feet in negotiations and if they show up their hard side at first, they tend to be more willing to make a deal after googling us :)

About the syndicalist register: It is supposed to be a tactic instead of collective deals so common in Sweden. The big unions sign on a deal that gives workers some increase in pay but lots of rights are just sold out so cheap for example the right to take action. The socialdemocratic unions sign on for peace at the work place, and their deals are so lousy every employer wants to sign it just for the peace and quiet it brings (Sweden has one of the lowest rate of strike days per worker in the world). The register works like this: The workers demand to be in control of their pay, their work hours and their work conditions and if their demands are not met they won't work and they make sure no one else take work on that work place. This has changed the compromise solutions/peaceful situations on those work places dramatically to a situation of constant threat of struggle and constant battle. This can't be done easily on every workplace, we have to organize a large section on the workplace, we have to have a solidaric mindset among the workers and they need to be willing to always defend what they've won.

Going from being served a collective deal every third year by the fat union bosses to taking control of your life. From passive onlooker to a driving force makes a lot happen inside people too, this is the big change as far as I can see.

this sounds really fantastic! we need something like the SAC where I live; there is a LOT of precarious or casual work here which is very difficult to organize through certification and contract negotiation.

securing the rights and working conditions of illegal, migrant and other precarious workers is crucial to the class struggle as a whole.

Thats great, and i love the tactics. But my question is, how are you guys organizing people who are not supposed to be there? Where I come from (US) if they find out that you are illegal and know where you are they deport you, in my case back to Mexico. There is a huge fear system against the illegals that forces them to work under the table for pennies.

We dont tell the police or the governement which our members are and the conflicts mostly are kept secret to the public. But in the case at Lilla Karachi the member had ocassional permission to be in sweden.

Since we are both "swedes" and "immigrants" the ones who do not risk deportion do the blockades etc.

unfortunetaly this brave men has now been deported to pakistan. more to follow.. 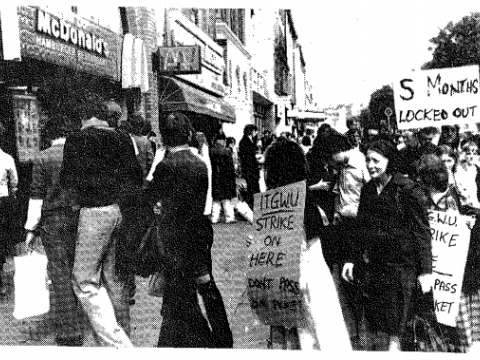