Since the 2008 economic crisis, the ballooning global debt has increased from $20 trillion to over $240 trillion. With this exponential growth of indebtedness and an unresolvable crisis of accumulation, capitalism is losing its grip. The effects of this crisis are felt no more clearly than within the maquiladora sweatshops on the northern border of Mexico. Here sub-assemblies are pieced together for the struggling US automobile industry north of the Rio Grande.

In recent weeks, wildcat strikes protesting slave wages at the 48 maquiladora factories in Matamoros (Tamaulipas), have shaken the bourgeoisie on both side of the US/Mexican border. While most of these initial strikes have been settled, numerous other wildcat actions continue to spread to other maquiladora and non-maquiladora businesses alike.

Many workers, making as little $1 US per hour, had walked off the job demanding a 20% wage increases and a 30,000-peso bonus. It is a paltry demand for those virtually enslaved in oppressive conditions with the lowest wages in the Western World. Moreover, the price of basic necessities, such as milk, are higher in Matamoros than they are across the border in Brownsville, Texas.

As the sheer number of wildcat strikes grow, these self-organized workers’ struggles are widening beyond Matamoros to other cities in the state of Tamaulipas. Workers at 45 factories in Reynosa are threatening strike action if they do not receive wage and bonus increases equivalent to those demanded by the maquiladora workers in Matamoros 55 miles to the east. Workers in the state capital of Tamaulipas, Ciudad Victoria, are now also threatening to strike. Everything is in such a flux, it is impossible to keep up with the changes on the ground.

The rapidity and intensity of this working class militancy that is spiraling from one factory to the next, represents a real threat to the bourgeoisie who fear the “rebellion” will spread, not only beyond the state of Tamaulipas to other border state maquiladoras in northern Mexico, but throughout the entire country. An ever growing crescendo of voices within government, academia, business and labor are now warning that this revival of working class demands pose a very real threat to Mexico’s economy. The Wall Street Journal notes that the strikes in the city of Matamoros alone are Mexico’s largest in over three decades. Indeed, they are the largest in North America in decades. The proletariat of the world can take a lesson from the workers of Mexico today.

Workers themselves are referring to this ever-increasing strike action as “Movimiento 20/32” to reflect the previous wage demands of the maquiladora workers. Short term demands of the “movement” aside, we are encouraged that the strikes outside the maquiladora gates have developed both independently from, and in opposition to, the unions. The workers have spontaneously decided for themselves what the most effective means of mobilization against the maquiladora factories should be. Inevitably they have found that wildcat strikes could best serve their immediate interests. But as these struggles spread from one factory to the next and one city to the next, it becomes more and more apparent that the fight must extend beyond the factory doors to the very gates of capital itself.

The spontaneous and independent organization of the Mexican wildcats points the way to a real solution to the global capitalist crisis. As the wildcat strikes of different factories in separate localities join in common struggle, the immediate interests of the factory worker become the interests of the class as a whole. The seeds of “workers councils” are planted whenever the working class takes action on its own behalf, but this self-activity alone will not cause them to germinate.

Yet it is this potential for the rise of a revolutionary class consciousness that strikes fear in the heart of the bourgeoisie. The workers of Mexico can now expect a full-on assault by both the right and left arms of capital to disarm their struggle by threat or intimidation, or to channel them with false hopes into the safety of parliamentary elections and union reforms.

Already we hear of companies that are firing workers in the strike affected industries, while others in the crisis-hit automotive sector are threatening to pull their operations out of Mexico.

The government of President Andrés Manuel López Obrador (AMLO) and the ruling Movement for National Regeneration party (Morena) are not impartial bodies independent of class interests. Together they are part of the state, which Marx defined as a machine of class domination, a committee for managing the common affairs of the whole bourgeoisie. Parliamentary reformists use working class votes to gain a seat on that committee and prop up a bankrupt and dying system capable only of inflicting more pain on the proletariat.

López Obrador and the Morena have supported the trade union apparatus in order to prevent the strikes and contain the growing wave of struggles. On January 25th, AMLO administration officials representing the President, sought a ten-day deferral of strikes while threatening workers with unspecified consequences if they didn’t comply. The government followed up with an army deployment to intimidate the workers into submission. According to the Associated Press on Feb 1st, López Obrador’s administration “actively discouraged the Matamoros union from seeking the pay increase”.

The surge of strike action across Mexico has roused the trade unions to double down on strike prevention efforts while negotiating sellouts. Unions exist to make deals with the bosses, not to overthrow them. The harsh reality is that the capitalists have no interest beyond the pursuit of maximizing profit. As such they can only offer worsening conditions or unemployed destitution.

Which is why the struggle implicitly challenges the right of the exploiters and their state. Our victories can only be partial or temporary as long as the system continues to rule. But when workers are so angry that they throw capitalist legality and fake union militancy to the wind they find their own tools to organise effectively. Strike committees, mass assemblies, and even (as we saw in Iran in December) calls for workers' councils to unite across sectors and territories.

However, as the whole history of working class struggle shows, capitalism cannot be beaten in one country or one factory. Unless the working class creates an international political organisation — a global revolutionary party, we can be certain that the Mexican bourgeoisie, indeed the ruling class anywhere where the oppressed raise their heads, will regain control of the situation. They will then restore “normal” relations of exploitation and the proletariat will face the same dilemma; how to live as human beings instead of a human resource to be exploited to the maximum.

The international political body will not stand apart from the class because it has its roots within it. It will be shaped by the coming together of revolutionaries who can see where capitalism is taking us all, and who fight for a revolutionary perspective, and the wider class movement. This party supports no faction of the capitalist class and is not a government in waiting. It encapsulates all the lessons of the struggle of the working class in a programme for a new society without exploitation. It does not just inform workers around the world about the struggles the capitalists try to hide from us (as we are doing here) but guides the class war away from all the siren calls of the reformists towards the overthrow of the capitalist world order. Armed with such an organisation, armed with the combativity shown by the Mexican working class, an alternative to capitalist war and day-to-day degradation can be built. And this is why we internationalists offer our solidarity, today in words, but tomorrow in deeds, to the movement that started in the maquiladoras…

No wall can contain the international solidarity of the working class!

English: International Solidarity with the Wildcat Strikes of the Mexican Maquiladoras

Read this yesterday, thought it was quite good. 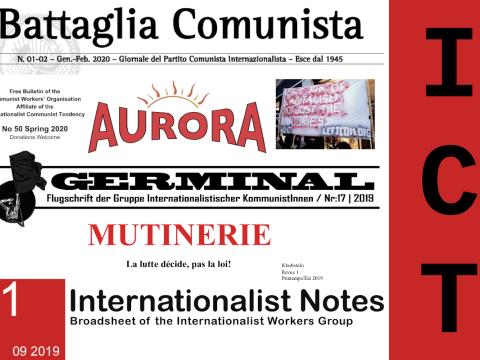 The International Bureau for the Revolutionary Party was formed in 1983. In order to give clearer expression to our existence as a united…
Image 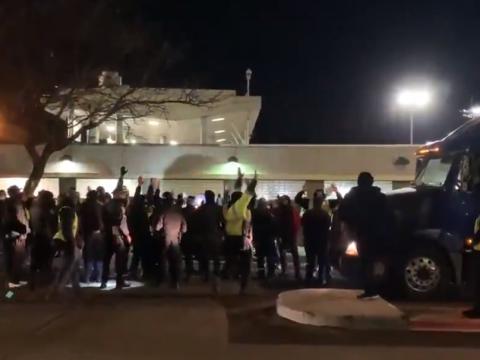 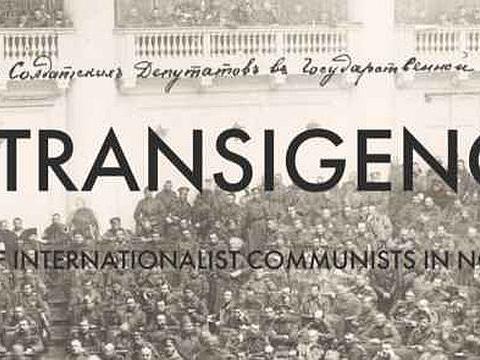 Intransigence is an online journal which is a joint undertaking between a few groups (Workers' Offensive, Gulf Coast Communist Fraction,…