A 1976 diplomatic telegram sent abroad by the Italian government informing of dangerous workerist intervention challenging the limits of an ineffective 4 hour token strike in Italian industry.

Sent 9th February 1976, originally classified for ‘Limited official use’ but since declassified and released as of 2006. Taken from the original text found in the Wikileaks public archive. For the libcom.org library the telegram has been properly capitalised and excessive internal markings removed for the purpose of readability. The content of the message remains the same.

1.
Begin summary.
A four hour nation-wide strike of industrial workers on the morning of February six was exploited by several ultra left wing, extra-parliamentary groups for their own ends and to embarrass the three leaders of the federation CGIL-CISL-UIL (CCU). While Storti and Vanni of CISL and UIL, respectively, have been subjected to this kind of planned harrassment on numerous occasions during the past six months, this is the first time CGIL Secretary General Lama has been the target of such abuse.
End summary.

2.
The pre-announced purpose of the February six strike in the industrial sector was to focus union attention on the urgent need to resolve the current economic and political crises. Bruno Storti, speaking in the northern commercial and industrial center of Milan, and Raffael Vanni in the southern port and industrial city of Bari were careful to avoid specific criticism of the economic program which prime minister designate Aldo Moro is using to try to form a minority one party government. They repeated their firm opposition to early elections and emphasized the need for positive steps to revive the economy and guarantee employment levels. Luciano Lama, who chose Firenze in Italy’s so-called red-belt as the site for his rally, expressed concern over the frailty of a single party government. He referred to the need for a new majority, which would presumably include the PCI. Commenting on the Moro program, lama said it was better in some parts than the policies of the outgoing Moro-La Malfa government. He praised proposals to combat the flight of capital and to provide emergency employment for the several hundred thousand youths who are seeking their first jobs.

3.
Lama’s remarks were contested by a group of demonstrators organized by the extra-parliamentary group Lotta Continua. Vanni was challenged by a similar group in Bari who frequently interrupted his remarks. The extra-parliamentarians caused the most difficulty, however, in Milan, which is one of their principal power bases. Several hundred members of Lotta Continua, Autonomia Operaia and the Comitati Unitari di Base occupied the places immediately surrounding the speakers platform several hours before Storti's scheduled appearance. They did not disrupt the other speakers, who represented the hard hit textile sector and workers in a number of factories which are facing shut downs. When Bruno Storti attempted to deliver his remarks, however, he was faced with a barrage of fruit and other objects as well as heckling. Interestingly, the ultras criticized Storti primarily because of his role as a leader of the Christian Democratic Party and not due to his union status.

4.
Comment.
The february six manifestations of intolerance by ultra left wing organizations were soundly criticized by CISL and the federation CGIL-CISL-UIL who called such actions "fascist" in nature. They are an indication, nevertheless, that CCU policies are not entirely accepted by all Italian workers. In addition to the extra-parliamentarians, socialist minorities in the three confederations have been highly critical of the CCU disposition to support moro's efforts to revive the economy. The socialists had attempted to turn the subject four hour partial strike in the industrial sector into a nation-wide general strike. This was rejected by the majority forces within the CCU. It is significant, however, that the ultras always turn out in force for this type of partial strike.

NB. The title of this is the title the Italian government sent the telegram under, not one I made up.

The CCU, was a federative coordination of the above three federations, and existed from 1972 before breaking apart some time in the 1980s.

These were the three big factions within Italian social democracy (the communist party was fast moving away from stalinism toward eurocommunism), and Aldo Moro was a politician from the Christian Democratic Party trying to pin them together and unite them, and in May 1978 was executed by the second wave Red Brigades, for his role in this.

Also worth noting, the Comitati Unitari di Base mentioned in this, and authors of the above poster, were in fact the factory group fronts for Avanguardia Operaia (Workers Vanguard), another extra-parliamentary communist group similar to Lotta Continua and Autonomia Operaia.

Several hundred members of Lotta Continua, Autonomia Operaia and the Comitati Unitari di Base occupied the places immediately surrounding the speakers platform several hours before Storti's scheduled appearance… he was faced with a barrage of fruit and other objects as well as heckling. 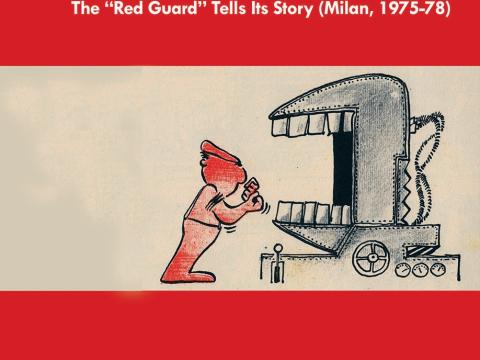 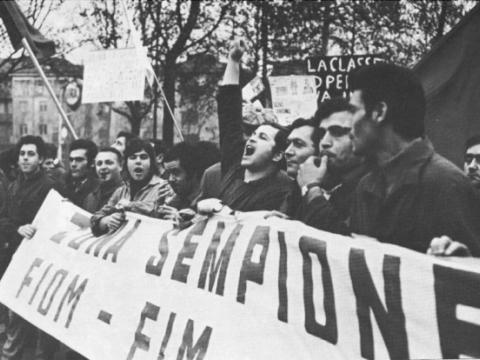 This article gives a brief overview of some of the social changes that took place in the mass struggles in the late 60’s. 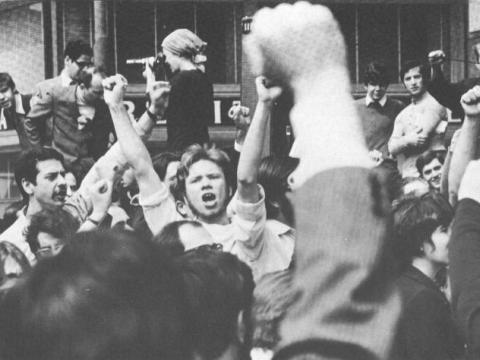 States of emergency: cultures of revolt in Italy from 1968 to 1978 - Robert Lumley