The Makhnos of memory: Mennonite and Makhnovist narratives of the civil war in Ukraine (1917-1921) - Sean David Patterson

A really interesting Masters thesis on the relationship between Mennonites and Makhnovists in southern Ukraine during the Russian Civil War through the historical narratives found in each group’s literature.

This thesis examines the conflict between the military forces of Nestor Makhno and Mennonites colonists in southern Ukraine during the Russian Civil War (1918-1921) through the historical narratives found in each group’s literature. Employing a methodology derived from deconstructionist approaches to history and James Wertsch’s theory of distributed collective memory, this thesis considers the nature of each group’s historical narratives, their biases, the context of their respective productions and how these same narratives contain intimations of the other side’s perspective.

The thesis explores Makhnovist and Mennonite narratives in relation to each other. Regarding the Makhnovists, the thesis argues that the personal writings of Nestor Makhno, Victor Belash, the Makhnovist Chief of Staff, and Makhno’s wife, Galina Kuzmenko, as well as histories by two of the movement’s intellectuals, Voline and Peter Arshinov, understood the Mennonite colonists through categories of class. The thesis divides Mennonite narratives of Makhno into Selbstschützler and pacifist accounts, both found in newspaper accounts, memoirs and secondary historical accounts.

The thesis shows how both of these Mennonnite accounts identified Makhno as the enemy but ultimately narrativized Makhno in different ways. The thesis analyzes eyewitness accounts of the 1919 Eichenfeld massacre and its representation in current historiography, arguing that this tragic event was the consequence of organized class-based terror.

By reframing Eichenfeld within the context of “revolutionary terror” a multi-perspectival narrative emerges, embracive yet critical of both Makhnovist and Mennonite narratives.

Soldiers with banner are not Makhnovists but Petlyura supporters.

Soldiers with banner are not Makhnovists but Petlyura supporters.

hi, do you mean the image accompanying this article? If so let us know and we can change it

A discussion of the photo of two soldiers holding a banner can be found here: https://robertgraham.wordpress.com/2015/03/29/the-makhnovist-movement-in-the-russian-revolution/

There remains the possibility that the banner is being displayed as a trophy and is not associated with the soldiers holding it. In any case, Makhno himself denied that the photo had anything to do with his movement.

Yes. This is reverse of the banner, it points to location outside Makhnovist operation http://radikal.ru/lfp/s44.radikal.ru/i104/1104/c2/6fdc4b17c09d.jpg/htm

Article on Makhnovist flags: https://t.co/dkk4DtVl2q
Facebook thread which discusses why this banner may not be Makhnovist: https://t.co/0VG9S7Shm1 (it is not 100% if they are of Petlyura's troops, but that is most likely group).

this is excellent article which refutes accusations that Makhno pursued a policy of persecuting Mennonites out of a desire for revenge or because of their religiosity. Well worth a read.

As for the Libcom picture (full version), you'll notice perhaps that the two soldiers pictured are wearing identical military uniforms. The only difference is that the soldier on left is wearing a sam browne belt with a cross strap (denotes rank in some militaries) while the other is not. I don't think that i've seen a photo in which two makhnovists were dressed so identically. Every historical photo of makhnovist troops that I've seen shows them wearing a literal hodgepodge of garments, usually a combination of military and civilian.

There remains the possibility that the banner is being displayed as a trophy and is not associated with the soldiers holding it.

Displayed as a trophy perhaps, but probably not by makhnovists. In fact, the uniforms that the two soldiers are wearing look virtually identical to those worn by hetman skoropadsky troops in the picture here (the enlisted men with rifles on the right hand side of the picture).

Skoropadsky was counter-revolutionary aristocrat who overthrew Petlyura in a coup d'etat and seized power over the Ukraine with the help of German and Austrian-Hungarian imperial forces following the signing of the treaty of Brest Litovsk in 1918. It was during skoropadsky's reign that Makhno first begin his guerrilla activities in the Ukraine. With the withdrawal of his imperialist benefactors in fall of 1918 skoropadsky's regime collapsed shortly thereafter.

Interesting stuff, thanks. I have changed the image 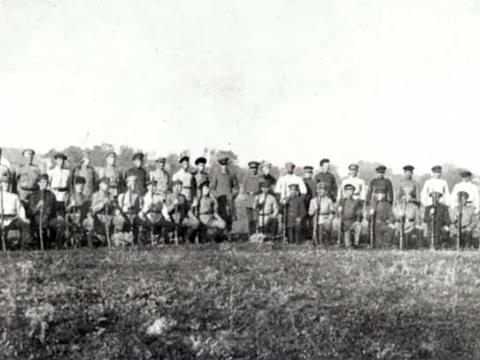 The Makhnovists and the Mennonites: war and peace in the Ukrainian Revolution 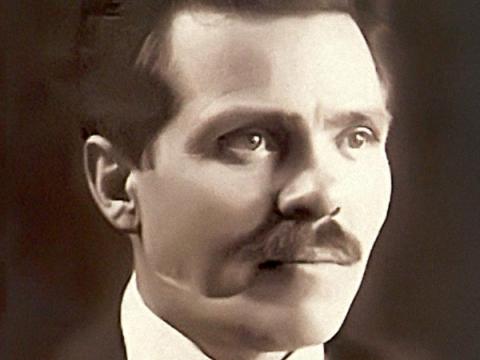 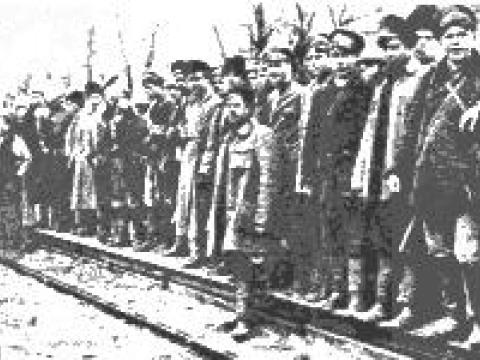 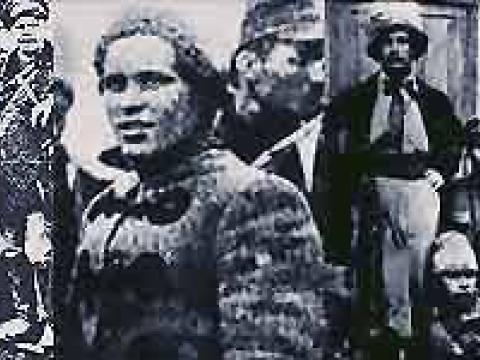 Anti-Semitism and the Makhnovists