We came away from May Day 2000 inspired and revitalised - and these are some thoughts from the discussions we've had in Leeds since then.

As participants in the May Day 2000 conference we don't constitute a whole movement. It’s important to remember that we are just part of a movement. Obviously there's also those people who knew of the event but didn't attend because they had to go to work, couldn't get a babysitter, or couldn't afford the train fare and then there's those people who'd have gone if they'd heard about it but didn't, and those people involved in campaigns and struggles in other countries. But crucially the vast bulk of this 'movement' is made up of people who don't consider themselves ‘activists’ or ‘political’ of but who nevertheless have to struggle against oppression and exploitation in their everyday lives – people, who just like us, are struggling for new ways of living. Obviously this begs a number of questions. What is a ‘movement'? Is it ‘the movement’? Is it more useful to think of ‘movement' as a verb (doing word), rather than as a noun (thing word)? In other words, should we think of 'movement' as the way our struggles change (move) society and social relations? And then what does `struggling for new ways of living’ mean? This idea or ‘people who struggle against oppression and exploitation in their everyday lives' seems to include a huge amount of people, but the times when those struggles goes beyond the defensive and towards the more creative type activities (self-valorisation) are a lot less common. Perhaps those struggling for new ways of living are people who live in communes miles from anywhere or perhaps it's LETS schemes or it's DIY music. Well, it probably does include those but more importantly we think it's about how people change themselves in struggle. Again this is a crucial point about movements - they are a time when things move. Political positions that have apparently been static for years suddenly shift. The paralysis we find ourselves in during times of defeat disappears overnight.

So we need to begin with the struggle, not ‘the movement'. Our movement will only come together, form itself, through struggle. Discussion., debate and argument among 'ourselves' are as much a part of our struggle against capital(ism) as anything else. Sometimes, though, we got the feeling that many May Day 2000 participants thought that 'the movement’ comes together at events like the conference, where the aim should be to discuss, agree and unite, prior to going out into the world and spreading the good word. This idea of the conference somehow being the movement is what really fuelled the debate about whether the conference should be described as 'anarchist' or 'anti-capitalise. (On the other hand, as people who argued for the conference to define itself as `anti-capitalist', we think there was also a real issue at stake about how useful the conference could be. In that respect, 'anti-capitalist' is not a label the same as `anarchist' - it's actually a step forward in the battle not to be so hamstrung by definitions).

Instead of getting so hung up about terminology we should always keep sight of the fundamentals of our politics: asking the questions 'what are we against?' and `what sort of world do we want to live in?' The answer to the first question is obvious: we're against capital. But what does this mean? Sometimes it sounded to us like the ‘alternatives' being offered at the conference are just different forms of the same thing: different forms of capital. For example, in the session What is a Movement? (Sunday, 4pm-6pm) we were asked whether we were against ‘child labour'. Yes, of course we are. But does this mean that we're happy to live in a world where we become wage slaves at sixteen, eighteen or twenty-one years of age? Are we happy for children to succumb to stress-related illnesses as they face an ever-expanding battery of tests, starting from an ever-younger age, in an education system designed to produce them as labour power? Are we against 'big government' and 'multinational corporations'? Yes! But does that mean we're in favour of 'small government' and 'small business'? And is Romania really 'not capitalist' as one person insisted!!?

Similarly in the session on GM food (Saturday, 10am-12pm) we were asked if we were against genetic modification. Yes, perhaps we are. But this is more because GM is part of capital's strategy for increasing control over our means of subsistence (and hence our ability to struggle against it - paralleling the 'Green Revolution' of the 1960s) than because of possible health risks, although the latter are also important. And does this mean we should therefore take the side of less-developed capitalist States against the seven 'more advanced' capitalist States in their debates over this issue? When the former are successful is that a victory for us?

Sometimes it seemed like some conference participants understand the world in terms of 'us and them - and them'. The first 'them' is the capitalists and their organisations, very clever and perhaps all-powerful. The other 'them' is 'the working class' or 'ordinary people', complicit, ignorant and/or too lethargic to 'do anything'. This view of the world isn't very helpful! It parallels the ways the traditional Left used to talk: because working class people are not 'politicised' (or 'active), they need to be educated and prepared for their historic role. The same thing in a different guise: if you're not part of the solution you're part of the problem.

Of course there is another tendency: to criticise activists mercilessly but see an idealised working class ‘out there' who spontaneously make all the right moves. We're criticising ourselves here as we're often guilty of this last approach. Obviously what's needed is to rid our heads of this divide altogether.

These ways of thinking don't do anyone any favours, ‘activists' or 'politicos' alike. Our struggles are connected, and can only be finally won by destroying capital, a social relation between people, whether we all recognise that or not. This means more than convincing people that some things are good, and other things are bad - it's about collectively changing the ways we live our lives. This is also why it's important to remember that we are struggling in our own personal lives, here and now, not in some abstract theoretical way. If we think of the film 'The Godfather' one of the themes running through it is 'this isn't personal, it's just business' - an idea which is used to justify the often fatal violence its characters do to one another. On the other hand, Al Pacino's character, Michael Corleone, understands why his father became and stayed successful as a 'Don': he knew that all business was personal:

”It's all personal, every bit of business. Every piece of shit every man has to eat every day of his life is personal. They call it business. OK. But it's personal as hell."

We're not mafiosi of course - but our politics are about us all frying to work out in practice how we can live together as human beings without fucking ourselves and each other up. Of course it's personal!

As loads of people have pointed out, there's a ‘common bond' between the struggles of all sorts of different groups - over housing, food, wages, child care, sexuality - which is becoming clearer and clearer as 'the movement' moves. We think this is a more useful way of conceiving of our activities: as activities. We're not interested in 'who's who', in what kinds of people are or aren't involved in 'the movement', for its own sake. We're interested in what different people are doing, some ‘political', some 'not', some 'activists', some 'ordinary folk', in relation to how they hinder capital's movement. Massimo De Angelis (Sunday, 12pm-2pm) said that capital moves like a shark: if it stops still, it dies. All kinds of activities put obstacles in its path. What we're interested in is making these activities, this movement, stronger and more effective.

If anyone wants to take us up on any of these ideas, we're always up for debate. You can contact us: c/o Anti/Theses, Cardigan Centre, 145-149 Cardigan Road, Leeds LS6 1LJ or at anti [email protected] 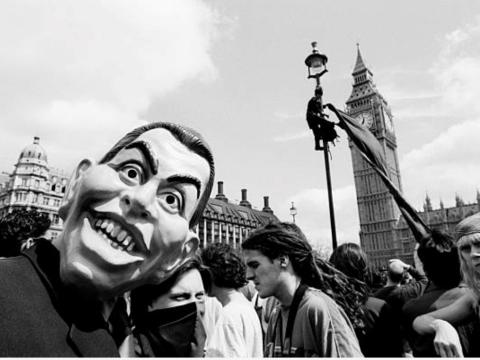 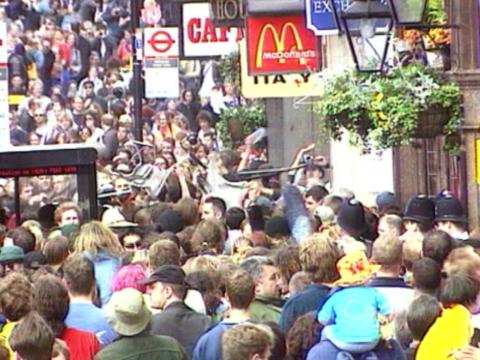 Diverse views on May Day

A selection of contrasting shorter contributions to Reflections on Mayday.