Diverse views on May Day

A mysteriously unguarded McDonalds is attacked in London on Mayday 2000

A selection of contrasting shorter contributions to Reflections on Mayday.

... Smashing up MacDonalds is one thing. Frightening staff who are on minimum wages is another.

…I've seen so much violence and police violence over the years - mainly at football - that it (kind of) astounds me when it continues....

All that was needed was a few people to steward the event, even only informally. To pick out places and actions that were going to rebound on us. To be there to explain that, 'look this bit of stone (the cenotaph) will cause us loads of problems if you spray it with "Gary is a poof” (one bit of graffiti I saw). Go and spray the Downing Street or Whitehall sign. To explain that smashing MacDonalds there and then (why not pick another one, do them around the country in sympathy, do them the night before - rather than the one that's just around the corner in the middle of everyone) will just be used as an excuse by the police to beat the fuck out of innocent crowd members.

... I have been a journalist for fifteen years and I find the blanket antipathy towards 'journalists' a mistake. Hardened news hacks like Nigel Rosser (he's less trustworthy than your average boa constrictor) don't give a fuck about reasonable reporting so avoid people like him but work on others who aren't...be prepared to debate ideas...know your facts...know your history. The arguments are our power, not our ability to 'bear arms' or stones or spray cans...

I thought the worst mindless thugs were in the Palace of Westminster.

My estimate is that increased poverty since 1980 has killed at least 100,000 British residents each year, that is two million people. Nobody appears to record how many die of poverty and since the 70s even the numbers recorded as suicides have not been published because they were increasing so rapidly. It would be interesting to note how the figures for life expectancy have varied. We do know that it is far worse for those in poverty.

The media attacks everyone. They call it 'critical' but it is just pure negativity. The only thing they are positive about is consumption.

... Blair cannot move. Having sold his soul to the media he is now at their beck and call and thus at the beck and call of corporations (for media read 'corporate missionaries').

He is their lapdog, but my guess is he would like not to be. If only he knew that the anarchists are fighting for what he probably wants too; community, belonging and love. All a politician really wants is to be loved. Deep down Tony Blair is an anarchist. We need him on our side. ...

.... The damage was minimal. The protestors were remarkable restrained given the lack of freedom to move around. The streets around Trafalgar Sq. were remarkably free of traffic, and for the first time ever, I could walk around the area without breathing in fumes, being run over and without the anxiety from the noise of bad drivers with short fuses....

We'll have to find a way to deal with agents provocateurs that give us bad publicity. I am resigned to wearing out the police, before they wear us out. I hope they get so fed up with us, that they'll have to calm down.
How about a 'Reclaim our Spirits' in a park. the theme would be spiritual, because capitalism and imperialism destroys our souls and prevents us from being real humans. We could have flower ceremonies, Buddhists chants, gospel music, tai chi, yoga, shamanic rituals and whatever else people do for their spirits.

I wonder how the police would deal with that.

.. Perhaps we might need to do more than just shrug when the usual suspects decide that venting their spleen by trashing another McDonalds and baiting the police in any way moves things forward. You can't build an effective broadbased coalition against capitalism and consumerism without breaking into the mainstream and you can't break into the mainstream if people think opposing capitalism means trashing fastfood franchises.

... Sir Winston Churchill was one of the greatest (and probably THE greatest) leader that this nation has ever had. Were it not for him, his patriotism, his resolve, and his dedication to the British people, none of you lot (or me for that matter) would be alive today. Why? Because our parents would all have been slaughtered following the German invasion and occupation of Britain. How dare you deface a statue erected in his honour?!!!!!! And the Cenotaph! Our national monument to all the hundreds of thousands of brave men who have their lives defending our nation. You bunch of commie hippy dropouts deface that too? No wonder Britain is fading as a global power with people like you lot in our midst.

... But this global civil society is new in that it is strained between being reactionary, in the proper sense of the term turned toward the past, and avant-gardistic. In other words, it's position has not been defined otherwise than by being against the dramatic effects of globalisation. So we find turtle-lovers and human rightists and cheese-protectors all standing side by side. Opposing the poor of the world to turtles in terms of meaning is of course irresponsible, since the poor would probably not mind inheriting a creation as intact as it was when we were all still coming down from the trees in an equally painstaking manner. But does that give one priority over the other? Of course not. The resulting problem of the diversity of actors is and was one of the greatest problems to the "left" in the past decade. But luckily, for many of those who went to Seattle, "left" and "right" is as outlandish as "turtle" and "yellow-headed squirrel monkey".

... What Seattle showed us, is that if social action continues -and that is a big if- then the globalisation based purely on motives of capital accumulation (to keep it simple), and operating exclusively by the mechanisms existing today will not succeed. As already globalised beings, we need not only to look at the social and political ramifications of globalisation, but subject all aspects of globalisation to the principle of plurality.

And the Cenotaph! Our national monument to all the hundreds of thousands of brave men who have their lives defending our nation. You bunch of commie hippy dropouts deface that too? No wonder Britain is fading as a global power with people like you lot in our midst. 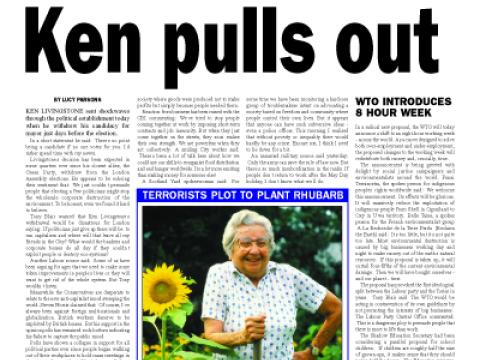 A member of the Socialist Party of Great Britain writes on London's Mayday 2000 events.