Mayday 2014: reports from around the world

With International Workers' Day taking place in a world riven by economic crisis, we're sharing short reports, pictures and videos on May Day protests and celebrations around the world.

Below are some short reports, pics or videos of May Day protests. Let us know if you've seen any more!

The tweet above says "There's nothing to celebrate for the precarious, students and workers".

Istanbul, Turkey
Massive fighting between police and protesters as upwards of 30 groups defy a ban on demonstrations.

Scuffles also broken out with violent police attacks. For videos of the day, see here and here.

Pnomh Penh, Cambodia
Around 1,000 factory workers demonstrate against low wages, and are attacked by police with five workers injured.

In Phnom Pehn, civilian auxiliary police, armed with clubs and often used by the government to break up protests, turned on the demonstrators after opposition leaders spoke to the crowd of nearly 1,000. The assaults appeared to be random and limited, and were over in less than an hour.

“These security forces seem to be addicted to beating people,” he said. “Every time they disperse protesters, they beat people, and not one of them has been arrested.” 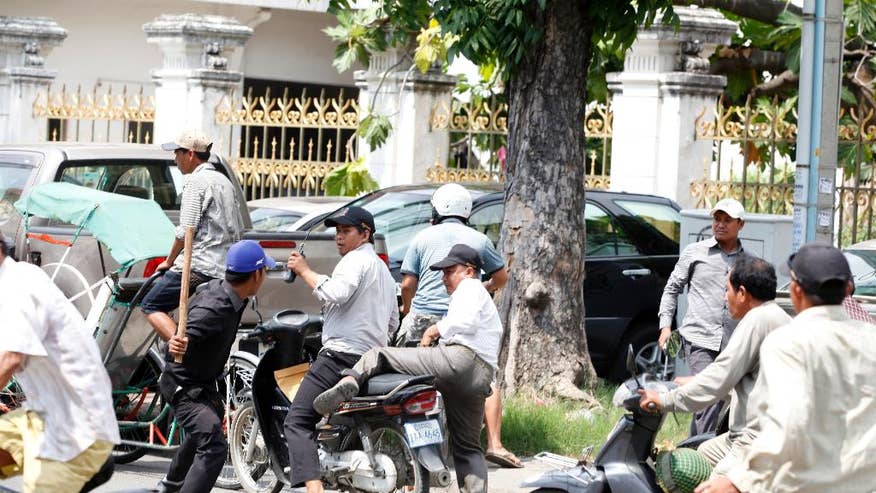 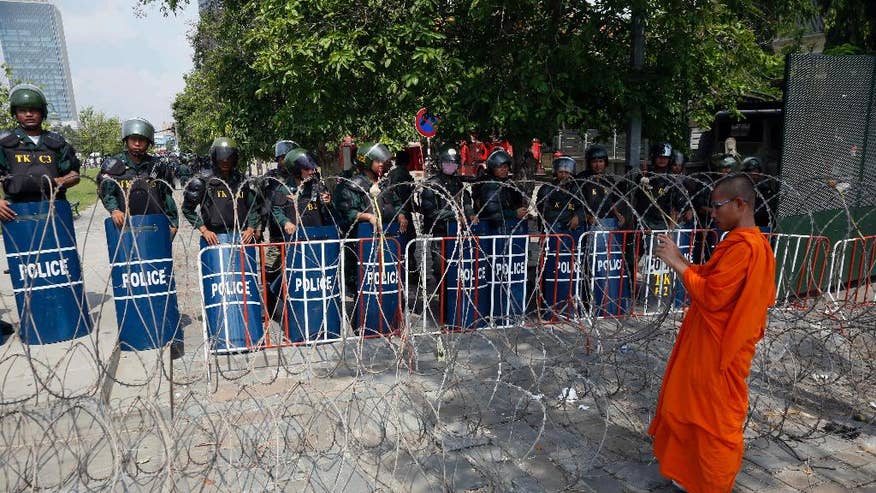 Phnom Penh govt thugs in action a short while ago as the attack bystanders at banned May Day rally pic.twitter.com/QV5BYPQuKV

Some really nice photos of demonstrations are the world here.

As the rally disperses peacefully at 4.30pm, an estimated 50,000 is reported to have gathered around the streets of Dataran Merdeka in today's May Day rally against the Goods and Services Tax (GST).

Several minor scuffles started by fringe youth groups are reported in the following hour, but on the whole the rally has ended peacefully.

Some pics can be found here.

Another May Day in Turkey. pic.twitter.com/vKRJsgu8M1— Mehmet Solmaz (@MhmtSlmz) May 1, 2014

Howevr much you try to change society there will always be men w/ Stalin banners, probably trying to stop you #MayDay pic.twitter.com/ahHr1ItN0f— Andrew (@Andrew__Dolan) May 1, 2014 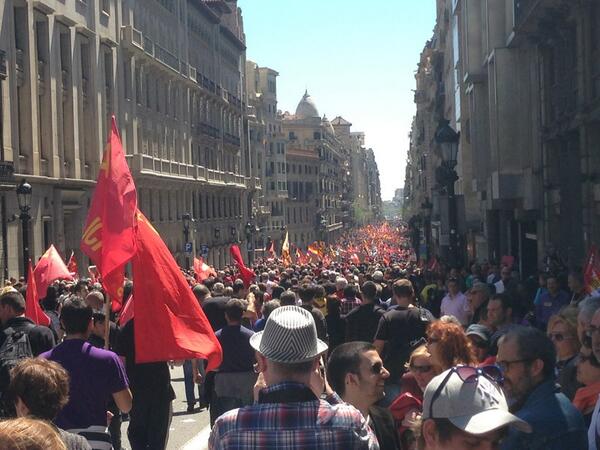 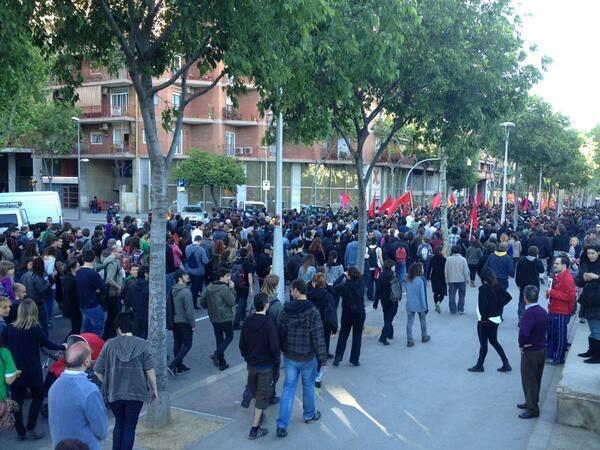 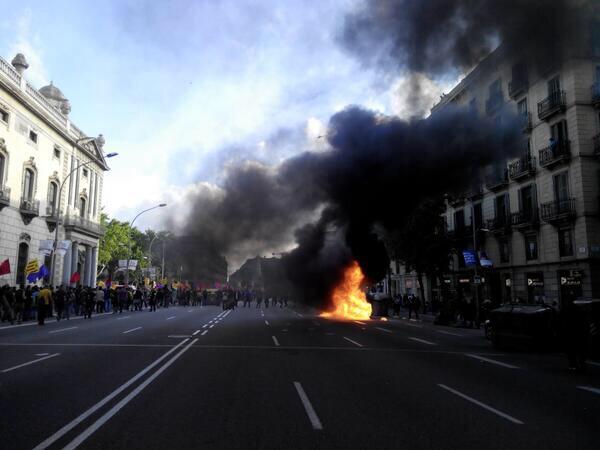 Howevr much you try to change society there will always be men w/ Stalin banners, probably trying to stop you #MayDay pic.twitter.com/ahHr1ItN0f— Andrew (@Andrew__Dolan) May 1, 2014

Btw, in case it wasn't clear, if people want to post updates from Mayday where they are then that'd be ace.. even if just a few sentences on what went on near them..

Demonstrators try to forcibly remove PD (Partito Democratico, like the Labour Party) members from the May Day demonstration, police have to come in to save them..
[youtube]xBIw8gkQNpw[/youtube]

And in Bologna
Members of base union Cobas (who do lots of organising in the big warehouses in the north) demonstrating for May 1st..

Naples, Italy
Workers and supporters at Leroy Merlin (kind of like B&Q) protesting it being open on a day of public holiday; in the end they manage to hold the demonstration inside the shop.. 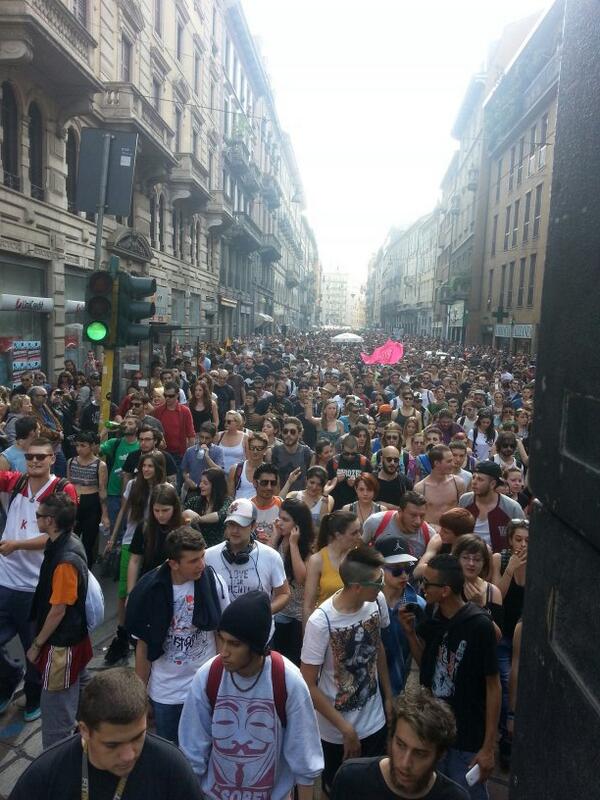 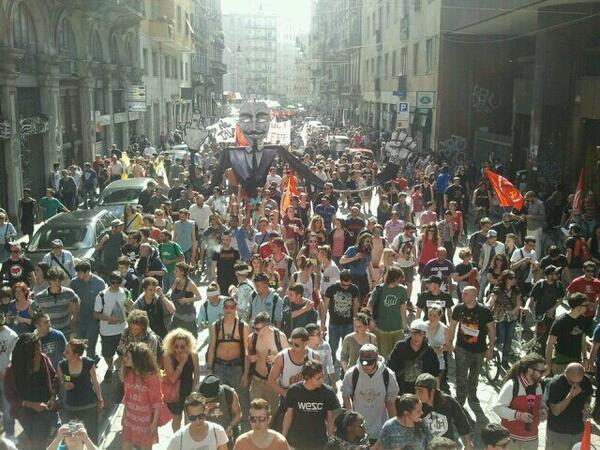 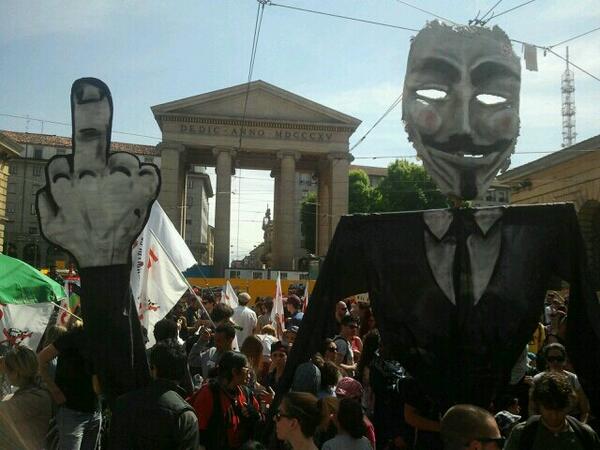 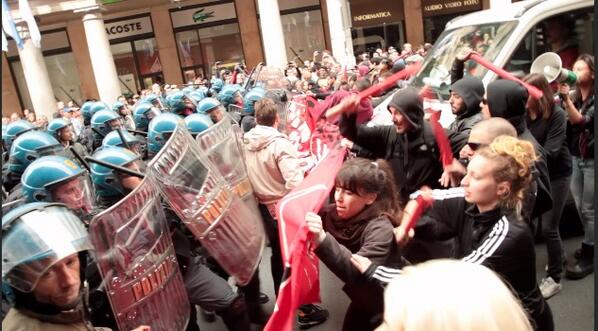 Video of the above picture below, with one demonstrator taking out a policeman with a plank of wood..
[youtube]ADtuR3elNco[/youtube] 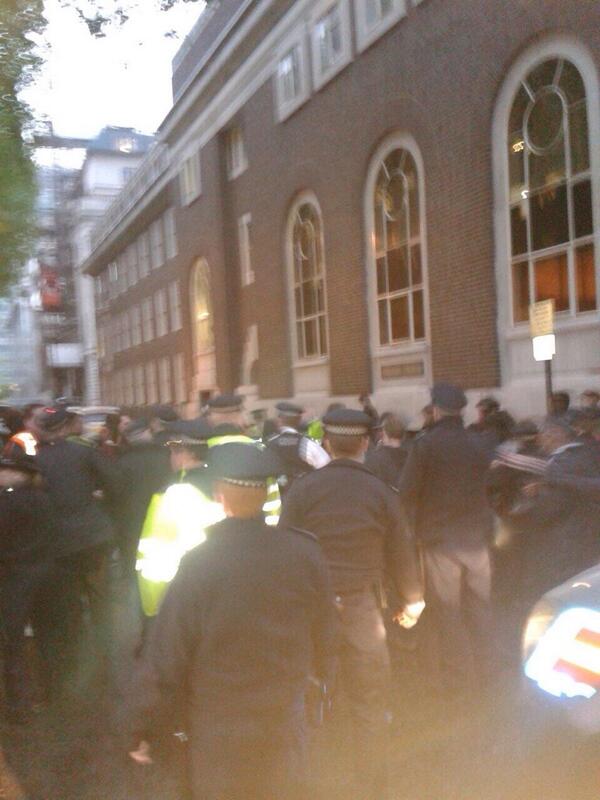 One policeman earlier draws for his taser 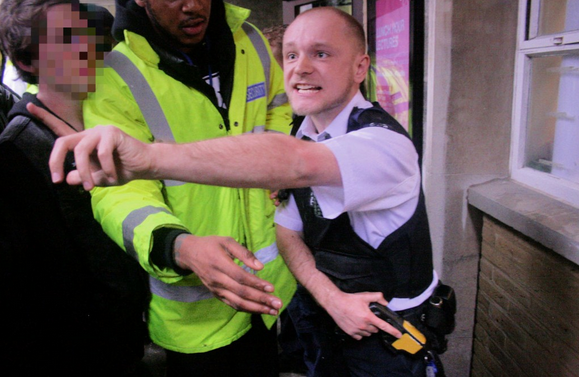 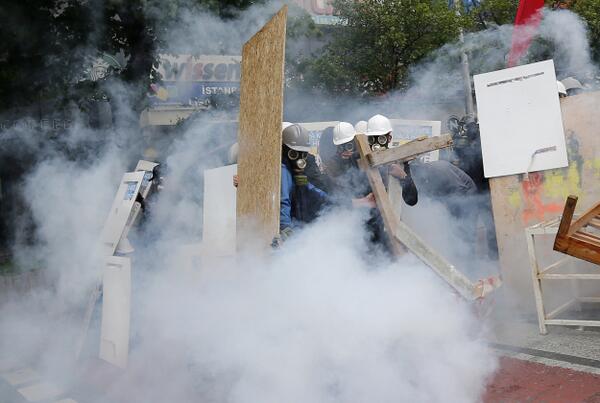 In this link there's a video from Turkish news of a policeman caught by protesters and given a kicking..

Some pictures from the Paris demonstration

as usual, loads of pictures and reports on Solidarité Ouvrière:

Btw, in case it wasn't clear, if people want to post updates from Mayday where they are then that'd be ace.. even if just a few sentences on what went on near them..

In a small classroom in a language school in London, some students completed a gap-fill to the lyrics of Solidarity Forever.

And that was my contribution to the global proletarian uprising.

There were several marches. One large march earlier in the day revolving around issues of immigration reform, and another, explicitly anti-capitalist march later at night.

The immigration march was much the same as it has been for years, and the anti-capitalist march went fairly strong for its third year in a row - although reports from friends at the march said parts of it were pretty sketch. Undercovers, lot of guy fawkes masks, etc. Decent article on it here: Seattle May Day 2014: An Anti-Capitalist Tradition!

One thing that does bear explanation - there are some photo's I've included of people dressed as superheros getting into a fist fight with blac block folks. Basically, its exactly what it looks like: Scuffle Between Anarchist And Superhero During Seattle's May Day March. 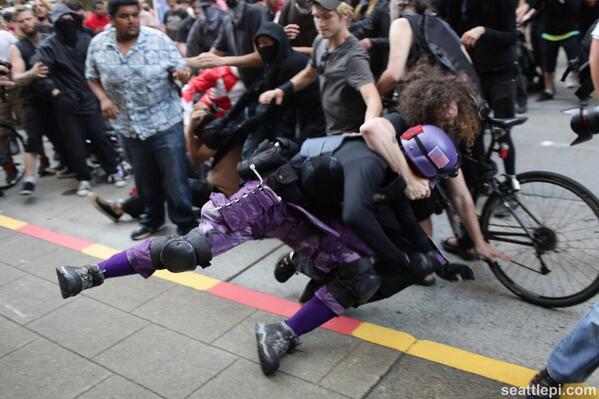 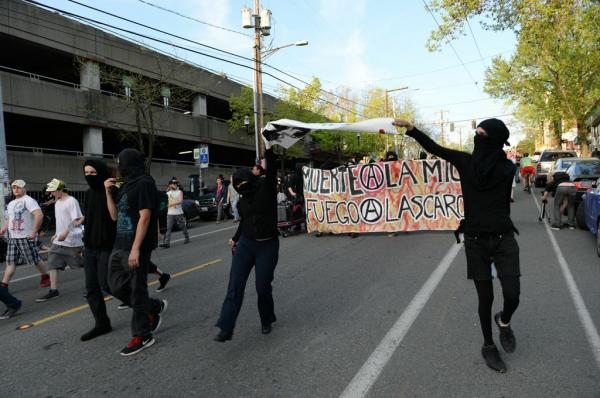 Anti-capitalist May Day demo in The Hague, Netherlands. The demo of about 300 people passed through two of the poorest neighborhoods of the country, areas where the local government cut a lot of funding on community centres, libraries, social projects etc, while at the same time installing more police and control measures. Racial profiling and police violence are common in the area.

A lot of people from the neighborhood joined the demo, which succeeded in keeping the initiative and countering police provocation, stopping the demo for a few times until demands (for example for plainclothes cops to leave the area) were met.

I got stuff from Buenos Aires, Caracas, Bogotá and - I think - La Habana in my inbox. Will try to write up tomorrow.

This one'll cheer you up.

Video from the demo in The Hague, Netherlands:

These pictures are just fucking beautiful.

Mayday greetings from the AWU (Ukraine) 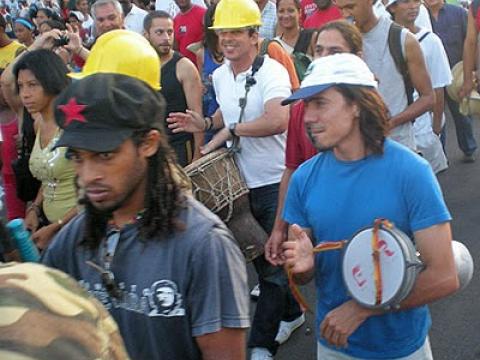 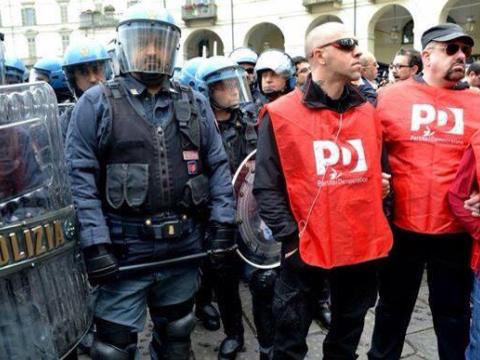 Portrait of Italian May Day 2014

On May Day, as in many other places around the world, thousands of people gathered in squares and streets all over Italy to celebrate…