Moscow And Us - Otto Rühle

Brief notes on the Russian revolution, the third International and their relationship with the German proletariat by council communist Otto Ruhle.

Its role was to call on the world proletariat to wake up; it was to give it the great watchword of socialism.

Its task fell within the realm of propaganda.

Its role was to gather together, to form and to prepare for revolution the masses who had awoken to class consciousness.

Its task fell within the realm of organisation.

Its role is to set the masses in motion and to initiate their revolutionary activity; it is to accomplish the world revolution and to establish the proletarian dictatorship.

Its task is a revolutionary task.

Its role is to establish the new economy, to organise the new society, to achieve socialism. It is to dismantle the dictatorship, to dissolve the State and to bring into the world a society without domination - finally free !

Its task is the achievement of the communist idea.

II
The Third International describes itself as the communist International. It wants to be more than it is capable of. It is the revolutionary International, no more and no less. It is located at the highest point to date on the graduated scale of Internationals and it achieves the greatest task that it can accomplish and which it is possible to achieve today.

This is precisely why it cannot already be the communist International.

What attracts the gaze of the world to Russia -- gazes of terror or admiration --, is not yet communism.

It is the revolution, it is the proletariat's class struggle against the bourgeoisie, conducted with resolution, heroism and a formidably single-minded spirit, it is dictatorship.

Russia is still a long way, by many miles, from communism. Russia, the first country which has arrived at revolution and conducted it victoriously to the end, will be the last country to arrive at communism.

III
The Bolsheviks came to power in Russia, thanks not so much to a revolutionary struggle for the idea of socialism, but rather through a pacifist putsch.

They promised the people peace.

And land - private property - to the peasants.

This is how they had the whole of the people behind them.

And the putsch succeeded.

They leapt over an entire epoch, the period of the development of capitalism.

From feudalism, the collapse of which began in 1905, and has been accelerated and completed by the war, they have changed through a fabulous somersault into socialism. They thought that at the very least the taking of power by socialists would be enough to inaugurate a socialist epoch.

They believed that power could, in a constructive way, make up for that which must grow and mature slowly as the product of an organic development.

Revolution and socialism for them were primarily a political affair. How could such excellent Marxists have forgotten that primarily they are an economic affair ?

The most mature capitalist production, the most developed technology, the most educated working class, the highest level of productive output -- to mention only these -- are the essential preconditions for a socialist economy, and from this of socialism in general.

Where could one find these preconditions in Russia ?

A rapid progress by the world revolution will be able to make up for this lack. The Bolsheviks have done everything to provoke it. But to date it has not come.

Thus a vacuum was born.

A political socialism without an economic base.

A theoretical construction. A set of bureaucratic regulations. A collection of decrees existing only on paper. A phrase for purposes of agitation. And an awful disappointment.

Russian communism is suspended in mid-air. And it will remain there until the world revolution has created the conditions for its achievement in the countries which are the most developed in a capitalist sense, the ripest for socialism.

IV
The revolutionary avalanche is in motion. It is bearing down on Germany. Soon it will have reached other countries.

In each country the revolution takes on its own appearance. It creates its own forms. It develops its own laws.

Although it spreads as an international affair, initially the revolution is a matter which concerns each country and each people in itself.

As invaluable as the revolutionary experiences of Russia can be for the proletariat of a country, as grateful as it is for the advice of its brother and the support of its neighbour, the revolution is its own business; it must be autonomous in its struggle, free in its resolutions, and must not be influenced and constrained in its evaluation and exploitation of the revolutionary situation.

V
In Moscow, they hold a different opinion.

Over there, they have a standard revolutionary design.

Supposedly the Russian revolution proceeded according to this design.

The Bolsheviks conducted their struggles according to this design.

Consequently the revolution must also proceed according to this design in the rest of the world.

Consequently the parties in other countries must also conduct their struggles according to this design.

Nothing easier and simpler than that.

We take the standard revolutionary design ( patented by Lenin ) from our pocket, we apply it... hurrah ! it starts off... and bang ! the revolution is won !

And what does this wonderful standard design look like ?

Up above the leaders, down below the masses.

Above : authority, bureaucracy, personality cult, dictatorship of the leaders, power to the headquarters.

A system of mandarins multiplies.

A KPD leadership taken to the extreme.

VI
It is not possible to apply the Ludendorf system in Germany for a second time, even if it puts on a Bolshevik uniform.

The Russian method of revolution and of socialism is isn't worth talking about for Germany, or for the German proletariat.

We refuse it. Absolutely. Categorically.

It would be a disaster.

More than that, it would be a crime.

It would lead the revolution is to its ruin.

This is why we do not want, and cannot have, anything in common with an international which ends up by imposing, by force even, the Russian method on the world proletariat.

We must preserve a complete liberty and autonomy.

It has come to the revolution later.

It must struggle with greater difficulty.

But it will arrive at communism earlier and in a more certain way.
Otto Rühle

This article was first published in Die Aktion, 18 September 1920. This translation has been made from the French translation in the journal (Dis)continuité No. 11 June 2001. 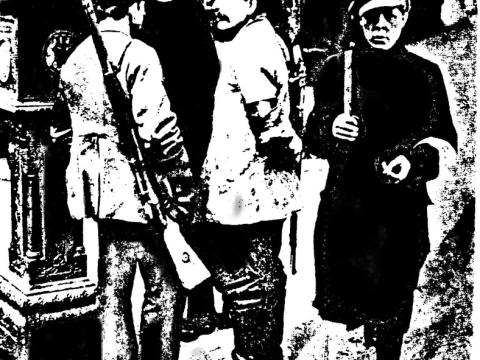 Report presented at the meeting of the KAPD Central Committee on July 31, 1921, by a KAPD delegate…

Report from the Congress of the Third International in Moscow by Otto Rühle of the Communist Workers Party of Germany (KAPD).
Image 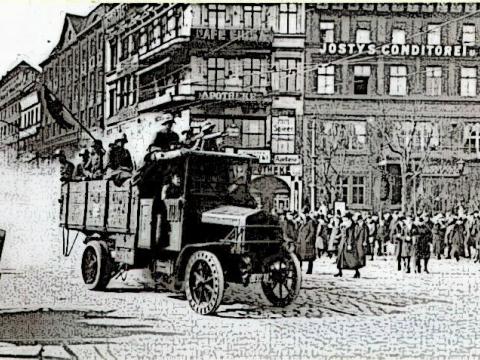 The Second Congress of the KAPD