The Politics Of French Rap

This is a small section of a far longer text about music, called "Some Musical Notes" which was originally published on the old endangered phoenix site. It was published at the beginning of 2006.

" French culture combines a highly rationalistic mode of discourse with great value placed upon verbal articulation. In an important way, every educated French person is expected to 'rap' ...Those who possess African, North African, Caribbean or other third-world cultures in addition to being French, combine the rhetorical training peculiar to the educational system with more "traditional" oral cultures..." - L. Portis, "French Frenzies".

Rap in France has recently been given a boost in its rebellious image. A leading government party politician, backed by 200 senators and deputies, has recently started the prosecution of 7 rappers, including the most famous - a rapper called 'Mr.R.' (Richard Makela) for insulting France, for saying that "France is a bitch, don't forget to fuck her till she's exhausted/You have to treat her like a slut, man...I piss on Napoleon and on General De Gaulle". This combination of genuine hate and a crass traditional masculine way of expressing it has been the classic content of rap for years. Undoubtedly these words are an insult - to 'sluts' and to women for liking sex - the usual hypocritical misogynist crap rap. France and Napoleon and De Gaulle are obviously unquantifiably worse than 'sluts', as are all countries and all their leaders. The compulsion to shock sometimes hits the right target a bit - particularly when it's attacking France, the cops or the media. But it undermines anything valid by expressing itself so shoddily. By being often arbitrarily provocative for its own sake, it illuminates little because its aim is always to sell, to turn anger into a commodity, to popularly represent anger in a traditional masculine way. Sadly, it also reflects some of the stupidities of many men (their deformed attitude towards their own sexuality, as well as women's) , not only in these 'ethnic' groups, but amongst many French men generally.

The prosecution got the go-ahead post-riots (i.e. the riots of November 2005).

Is this a bizarre self-delusion on the part of the State? Do they think that attacking rap is necessary because it genuinely incites riots? Surely it is riots that feed rap, which then, through the inverted logic of the need for this society to find hierarchical scapegoats/Leaders, is seen as the instigator. At the same time, French rap seems to be more genuinely on the edge of merely teasing with an image of violence and a heart-felt hatred of the system than, say, in the USA, probably because France is often more overtly racist, and up to now hasn't been forced to adopt much of a margin of integration like the States was after the far more threatening riots of the 60s (in the US the State made a conscious attempt to create a black middle class, a social buffer zone; a strata of black representation and a social position to aspire to). For instance, the 'political' rappers are almost invariably banned from radio and TV (so far). And yet, at the same time, some municipalities have been providing financial subsidies to selected rappers for some ten years now, so in many ways it's a French version of the very usual stick and carrot, sometimes 20 years behind everywhere else, sometimes very modern. This is partly because of the vast across-the-board rebellion in many different aspects of society and of life there. And the need to use race as a basic divide and rule makes for some very intense contradictions: French society has to brutally repress and falsify the non-whites (e.g. by caricaturing the explosions as simply 'preying on their own kind' or 'shitting on their own doorstep') at the same time as enticingly integrate a few of them, providing 'hope'.

Some American Leftists complain about the lack of affirmative action there in France, ironic since it is the obnoxious right-wing Presidential hopeful Sarkozy who is now pushing for positive discrimination as a way of providing "hope" ("hope is the leash of submission" as a 60s revolutionary once said). Mr.R. has as guest co-star on his last album - "Politically Incorrect" - the head of the Trot organisation, the LCR (which, faced with the non-existent, and manipulated, fantasy prospect of the National Front coming to power, urged its audience to 'Vote for Chirac', as did quite a few 'anarchists' - about as 'politically incorrect' as you can get). Are there those in the State who think it's worth boosting this professional image of opposition? Isn't French rap simply an unthreatening image, like the LCR - essentially representing the poor, and almost always in terms of some amelioration of conditions, rather than in the radical destruction of these conditions (French rap, when it tries to be positive, calls for work and respect, as if the two are compatable)? Mr. R. himself appealed to this unthreatening image when he said, "There are plenty of songs that are part of this country's artistic heritage and every bit as virulently anti-France, and nobody complains." - but then when possibly facing 3 years inside, you use such democratic arguments. Repressed, rap appeals to such democracy within a limited narrow perspective of a moan about cultural censorship - when most people have to shut their mouths all the time when they work and can never appeal to the privilege of a specialised cultural bubble -"Hey - I'm an artist!". At the same time it reflects something more general - an increasingly common individualist consciousness which thinks only of one's own misery: everybody wanders why they are the 'exception', why the State and the system is picking on them even as it 'picks on' millions. This is essentially because unless there is common class struggle, all these miseries become just little you on your own, or in your little unit, trying to fight your way through the jungle. And rap artists too have to defend their corner. But there's a difference in a rap artist and other workers. Workers who rebel for the most part only identify with the money they get from the work, not with the alienation they produce. Rappers pretend to rebel but identify very strongly with the commodity they produce: it's them themselves.

Sarkozy has already, some two years ago, tried to prosecute some rappers, for, amongst other things, "anti-semitism" (in fact, for supporting Palestinians against Israel) but without success (though a few years back, in Toulon, the National Front mayor and judge did manage to successfully prosecute some rappers, who got 3 months inside, and were banned from playing for 6 months which shows how insanely racist France is). Maybe the State thinks it's worth experimenting with trying to terrify everybody into silence? Regardless of the intention, the effect is the same - providing rap with a post-riot image of genuine rebellion and and a post-riot role model for getting out of the hell-hole estates. Mr.R. himself no longer lives on the estates - despite his continuing need to claim to represent these estates; after all, it's the estates that provide him with his income, and the announcement of Mr.R.'s intended prosecution has already boosted sales, surprise surprise.

This text was preceded by the following relevant look at rap:

The biggest selling rap artists and record labels organise periodic conferences for their industry – which is the dominant force in popular music. They discuss the fact that ‘product and brand placement’ is more commercially effective in their industry than others. What they wear and consume, their many fans will follow. This of course encourages various enticing gifts and offers to rappers for ‘endorsement’ from manufacturers of clothing, jewellery etc. This fits well with the rappers’ image of themselves as suitable ‘role-models’ for their fans.

"The black politicians, middle class social workers and made-it-out-of-the-ghetto rap and graffiti artists generally see themselves, as examples that young blacks should aspire to. Some rappers, while flaunting some of the biggest gold chains on the block (ghetto status symbols made from gold mined by South African blacks) advocate a specifically Black Capitalism - but obviously they will jealously defend their privileged position within it, because (contrary to the illusions they sell to youth) there ain't much room at the top or too many routes out of the ghetto. They need a permanent captive ghetto audience as a basis for their privilege and black capitalist wealth - those who market rebellion need the obedient exploited consumer to buy.
The black role in the American cultural spectacle is one of individual achievement: sport, music and to some extent film and literature, have been the traditional "ladders to success" for blacks. This individual achievement is often seen as a source of collective pride; role models to aspire to and identify with (encouraging advancement through individual, as opposed to group, dedication) and an integration into the dominant values of society - both in pure economic terms, as consumers, and by directing energies towards upward mobility in either the black or mainstream white world. Nevertheless, because only limited numbers can move upwards regardless of individual effort, the spectacle masks a lie that is exposed on the level of collective daily experience.
Rap emerged from the U.S. ghetto much the same as reggae toasting did in Jamaica. The emphasis on words over music is part of a reduction of music to its basic components (the Punk ethic is similar). With a record deck and a microphone anyone could be a rapper, and techniques like scratching and sampling were dismantling pop music, stripping it down to its component parts and making them interchangeable, like some mass market atonality. This was logical, seeing as pop recording studios had long since become conveyor belt corporation production lines. It was admitting that the social function of one pop record was equivalent to any other; also that the cult of individual originality (i.e. guitar heroes, specialised musical skills etc.) could largely be replaced by technology. Yet what the form implied was denied by the content and by speedy commercialising. Some of the early, more subversive rap scene, when the mike was passed around and freely available to anyone who had anything to say, would perhaps have been "too real" and unmarketable. (Perhaps a continuing link with the "call and response" song tradition that the slaves brought with them from Africa, and, via the communal work songs of the fields, was passed on through blues, jazz, gospel and soul?) This openness and "democracy" was quickly submerged/suppressed by the individualising influence of the whole star-making process when record companies came around flashing cheque-books and contracts - passports out of the ghetto. Despite being preoccupied with words, rap records have most often been a vehicle for either macho boasting or simplistic black nationalist ranting and sloganeering repeating the mistakes and limitations of the 60s civil rights/black power movements. Anyway, in time it will become clear that, behind the image that teases with rebellion ("Burn Hollywood Burn" was used to good effect by the L.A. insurgents of May '92), Public Enemy, NWA (Niggers With Assets?) etc. are just as much part of the cultural bourgeoisie/pop establishment and in real terms no more radical than the Rolling Stones or Michael Jackson. Perhaps the recent attack on Spike Lee, while he was filming his biography of Malcolm X movie, by hundreds of black youths in Harlem who accused him of commercialising and profiting from the man's memory is the beginning of a critique-in-action of commercial black culture and its role in the containment and recuperation of rebellion."
Taken from the text on James Carr (written in June 1993). 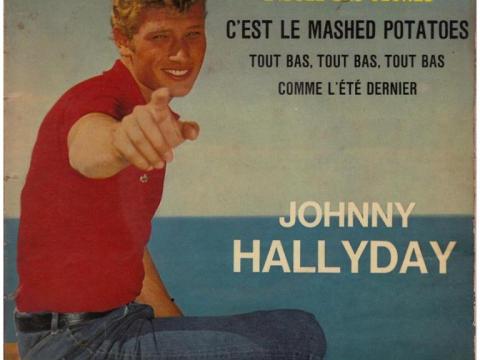 The Poverty of French Rock ‘n’ Roll by Larry Portis

This is chapter 6 of Larry Portis' book French Frenzies. Larry Portis died a week ago near Ales in the Languedoc-Roussillon region of the South…

At the Crossroads. Music review