In the 1890s several groups of, in the main, young activists broke away from Hyndman’s Social Democratic Federation and coalesced as anarchist groups in Canning Town, Deptford and Peckham. The Peckham Anarchist-Communist Group was one of these groups and was extremely active. It engaged in much local activity , although the rather suspect anarchist H. B. Samuels became a member of the Group.

However this period -1893-1894-was one of active repression against the British anarchist movement, with government, police and judiciary acting to attack open air meetings organised by anarchists, as in Hyde Park, Manchester and indeed in Peckham.

In March 1894 Peckham Anarchists held an open air meeting in Peckham Park Road on 15th March. A group of right wing thugs in collusion with the police attacked the meeting and seized the group’s red flag which was then torn to pieces. The group defended themselves with walking sticks and the police, who had been actively inciting the mayhem moved in. Detective Sergeant Walsh of the CID apparently got behind little boys and pushed them forward, according to Freedom of April of that year. Alfred Foster, the main speaker, twenty seven years old and living at Commercial Road, Peckham was arrested by P.C. Martin for ‘disorderly conduct by causing a crowd to assemble’!1

At Lambeth Police Court the following day Foster appeared before Justice Biron. Speaking for the defence was another member of the group William Hart, a tailor’s trimmer, who stated that he was an atheist and took an affirmation rather than swearing on the Bible. Biron was hostile from the beginning asking “You were making Anarchist speeches?” Foster was ordered to find a surety of £25 to be of good behaviour for six months or go to prison for a month.

The following week the Peckham anarchists again held an open air meeting which was “perfectly orderly” until a group of blackleg gas-stokers operating in collusion with CID detectives attacked the meeting. As a result the Peckham group gave up holding open air meetings, but continued an active propaganda.

It was present for the May Day assembly in Hyde Park later in the year where its black banner was inscribed with the motto: ‘Away with authority and monopoly - We demand free access to the means of life’. However this meeting too was attacked by a gang of toughs, again working with CID detectives and Inspector Melville’s Special Branch. Anarchist speakers like Ted Leggatt, Banham and James Tochatti were physically assaulted.

In all of this the press portrayed the attacks on the anarchist assemblies as a popular response from outraged citizens when it appears that the police instigated and organised these attacks in collusion with reactionary thugs. The account in the Huddersfield Chronicle ‘An Anarchist and his Prupperty” describing the arrest and trial of Foster is particularly shrill and virulent, and this local daily seems to have specialised in anti-anarchist diatribes.

William Hart is of course W.C. Hart who was involved in the anarchist movement for ten years, acting as secretary for the Peckham group and then the Deptford group. He wrote an extremely bitter and hostile attack on the anarchist movement in the 1906 book Confessions of an Anarchist. Interestingly, he describes many cases of provocation in his book including one incident when a close friend of his, an extremely good-natured anarchist sheltered a French anarchist, even pawning his carpenter’s tools to buy food for him. This comrade is almost certainly Foster. The Frenchman attempted to involve him in bomb attacks, writing on his behalf to France to send for bomb recipes. Hart read the letter before it was sent and had it burnt. The Frenchman had gone out in the morning and never returned. Meanwhile the comrade carpenter was under surveillance for several weeks by detectives. Hart wrote that he was told by someone from Scotland Yard that the Frenchman had informed the French police of the arrival of the letter, and they in their turn had informed Scotland Yard (this of course, raises a number of questions about Hart himself and his contacts with the London police).

Thanks for this, great snapshot of London's radical history! 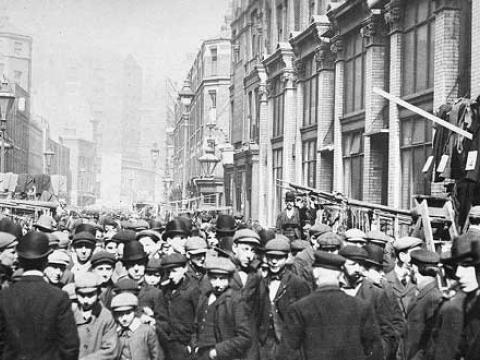