The second uprising in the Greek prisons in only two days was sparked by the death of Katerina Goulioni, inmate activist against vaginal inspection in jail. Clashes have erupted outside the prison between riot police and solidarity protesters. Koridalos Athens prisons also in turmoil.

The death of Katerina Goulioni, a female prison activist known for her struggle against vaginal inspection of inmates sparked a violent uprising in the Women's Prison of Thebes on Sunday 22/3. Inmates have refused to return to their cells, and are setting fires and smashing the jail premises, while a protest march in solidarity to Goulioni clashed with riot police forces outside the prison. One section of the prison is said to be seriously burned.

Tension is also evident in the central Athens prison of Koridallos where 200 inmates are staging a protest in solidarity to the Theban uprising. The Minister of Justice, Dendias, notorious for his recent police-state legislations, has refused to allow the Initiative for Prisoner's Rights to visit the rebel inmates, saying he will not tolerate "left wing threats".

Katerina Goulioni's last letter to the Initiative for Prisoners' Rights published in the Communist Newspaper Epoxi is revealing of the activist's struggle with the prison authorities: "I hit the chief-screw because besides everything he had me locked in isolation in Koridallos Prison and I had to pee in a bottle". Besides her struggle against vaginal inspection which she has termed "informal rape", in letters past, Katerina has denounced the conditions of prison transfer, a process during which many inmates lose their life under suspicious conditions, the lack of facilities for prisoners with special mobility needs.

Goulioni's co-inmates have sent the press the following goodbye note to their comrade:

"All your life was full of thirst. Thirst for struggle and justice. You fought for all and for everything without care for the consequences. And at the end the consequences of your struggles rewarded you in the worse of manners, with a violent, unexpected sudden death. But we are still here, Katerina, and we shall remember you and continue the struggle you began. You are everywhere. We sense you and we thank you for taking care of us. For us, you will live for ever. Have a great journey!"

During the clashes outside the prison one protester was wounded and is being hospitalised with a broken arm. Late in the evening the general secretary of the Ministry of Justice held talks with the rebel inmates, promising an immediate revision of vaginal inspection methods (hinting at the introduction of ultra-sound technology) and the improvement of prison conditions as a whole. An investigation over the conditions of Goulioni's death during her transfer from Crete to the mainland has been ordered. It is still unclear whether the inmates have returned to their cells.

Amnesty International's Greek department announced regarding the death of Goulioni:

«Accusations on unacceptable treatment of prisoners in greek jails are growing, while first reports on the conditions of Goulioni's death do not exclude the possibility of its connection with her struggle for defending human rights of prisoners. After so many deaths, brutalisations, and uprisings the authorities must at last left the veil of concealment over prison conditions, and allow access of control bodies and organisations into the prisons, as well as move into immediate and effective measures so as to guarantee, as they are obliged, respect of human dignity and human rights for the prisoners"

Is it known how she died?

After 18 days 7,000 prisoners in greece stop their hunger strike after the ministry of justice concedes to a series of their demands, promising to release half the country's prison population by April 2009.
Image

Demos outside prisons, occupations of city halls, and riots start with the change of year across Greece
Image 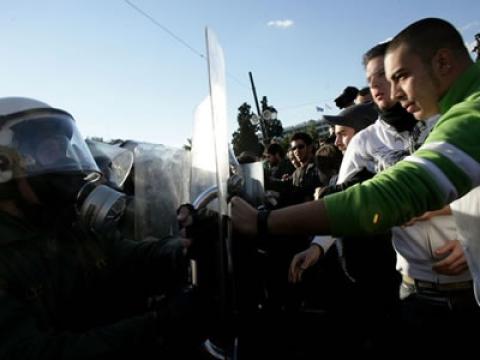