The photographs, taken in Patras today and published on the greek NEA από όλο τον Κόσμο blog, show fascists armed with blunt weapons brazenly stalking the streets with the police.

In accompanying notes, the blogger said: "The police are using neo-fascists and policemen in plain clothes, with rocks and sticks, pretending to be demonstrators who are targeting either the demonstrators or vandalizing small shops and houses, trying to divert the climate and scare off the everyday citizens.

"The pictures are from Patra city, where Policemen in plain clothes and Neo Fascists were clashing with demonstrators AND caught vandalizing small shops in the city. This was confirmed this morning by the Mayor of city of Patra, this morning on a major TV channel (Alpha)."

The photographs follow allegations last night that police have been handing tear gas and other weapons to fascists in the city, with widespread assaults taking place against demonstrators.

To start with, I'd like to inform you that I'm a university student in Patras &
what I report below is an eyewitness account of incidents I experienced & not
somebody else's ---- narration/hearsay... ---- Unfortunately, Patras saw the
resurrection of the "ghost" of '91, when Nikos Temponeras was murdered. In that
case, the parakratikoi [the other-other hand of the greek state: the activist
leg of the greek extreme right wing helping the greek state out in a time
honored tradition going at least as far back as the '50s] counter-occupied [the
already occupied schools] throughout greece after they had been incited to do
exactly that by then-minister of education Vassilis Kontogianopoulos.

In one of those [counter-occupations], Nikos Temponeras - a teacher - was killed
[with a crowbar...] by the leader of ONNED [the youth organization of Nea
Dimokratia - which party is ruling the country today, by the way] Ioannis
Kalampokas.

Today, December 9, saw 2 demos in Patras. One of them at 11 in the
morning with zero unrest. The other one at 3 in the afternoon. During
this latter demo, extensive unrest was notable. I'd like to remark
that no vandalism against small, privately-owned businesses took
place. The targets were the Germanos [electronics chain store] & WIND
[mobile telephony] stores. Nobody's property was damaged.

At some point, certain members of the well-known fascist organization
Hrisi Avgi (Golden Dawn), together with plainclothes agents - & not
infuriated citizens, as the mass media insist [on calling them] -
started throwing rocks & chasing remonstrators with their clubs. For
this reason, rudimentary barricades were put together in the streets
around the University of Patras department [located there]. These
barricades, though, were violated relatively soon with the help of the
Riot Squad which kept throwing teargas at large.

When the barricades were torn apart, the people started retreating
little by little. In the front, street fights between
antiauthoritarians & neonazis-ONNED members. Behind them, members of
student collectives formed an outer shell [typically called a "chain"
& made up by people holding on to each other & to banners, with the
rest inside it; much like a fence] in order to protect themselves. The
neonazis were running with clubs & knives towards the demonstrators,
while at the same time they were hurling rocks [at them].

When, eventually, the neonazis together with the ONNED members got way
too close to the people, those people started running panic-stricken.
The "infuriated citizens" were yelling slogans against immigrants,
anarchists, & leftists. Slogans such as "Anarchists, sons of whores"
etc., together with the fact that, later, they took to the direction
of the immigrant shanty town & took out knives (a well-documented way
of attack, as far as Golden Dawn members go) made it clear once & for
all who these "infuriated citizens," as they are called by mass media,
are.

There are even photos in indymedia patras proving that those damaging
stores are the same with those chasing after the demonstrators. Here,
I'd like to emphasize that those committing arson & causing damages
have no relation whatsoever with either the antiauthoritarian circles
or any left wing factions. They are mpahaloi [a specific subclass of
people subscribing to some vague nihilist ideology - if they subscribe
to any ideology at all - & in it for the excitement of wreaking
havoc], agents provocateurs, & hooligans...

According to certain information (I haven't crosschecked it), a
demonstrator was stabbed & carried to the hospital. As I'm writing
this (3 in the morning), the center of Patras is chokefull of armed
neonazis & plainclothes agents. Personally, I'm not sleeping at home
tonight, because I can't get there...

For one more time, the shadow state acts with the police's blessings.
Naturally, it's the government who's behind all this & who's the sole
one responsible for this parade of shadow state antics & violence.

The only way to crush terrorism is mas demos... The government's aim
is plain to see: to keep the people away from demonstrating by using
violence & terrorism. If they wanted to catch the "hooded ones" they'd
done it! The mass media play the role of the sycophant repeating
inaccuracies...

To the streets, then, to crush terror... 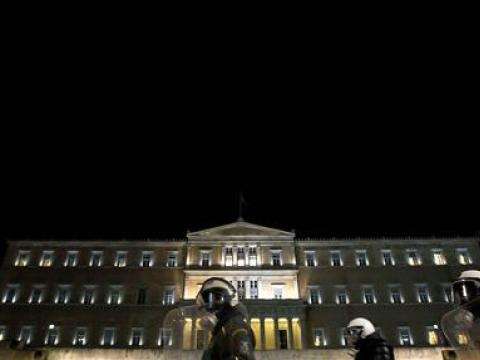 In critical and suffocating times - TPTG

The Ta Paida Tis Galarias (The Children of The Gallery) group report on the recent demonstrations in Athens against austerity measures, including…