Article on the revenge prosecution of squatters by the West German state in the 1980s.

The present wave of criminal charges being brought against peace demonstrators is being followed closely by the media, but the crusade launched by The Berlin Public Prosecutor's Office against ex-squatters barely gets a mention in the press. Squatting is 'out'; last November the last of the houses had been either evicted or legalised and Innensenator Lummer could declare that "this dark chapter in the history of the city" was closed. However, the Political Department of the Public Prosecutor's Office in Moabit is still very active. Approximately 1,000 people whom the police have arrested in squatted houses are being charged with Hausfriedensbruch (literally meaning: breach of the peace of a house/closest equivalent In English law would be 'criminal trespass') often in conjunction with 'resisting the police in the course of their duty', or theft of electricity, gas and water. The first sentences have already been passed.

When Chamisplatz 3 was occupied in September 1980 and evicted shortly afterwards, the twelve people involved were charged with Hausfriedensbruch, but during the subsequent hearing in February 1981, the Public Prosecutor's Office, under instructions from the Justizsenator, withdrew the charges.

Charges of Hausfriedensbruch brought against squatters never led to convictions during the last few months of the Social Democratic-Liberal city government. At that time, official Senate policy, the 'Berlin Line', involved differentiating between 'peaceful' and 'violent' squatters. Even the head of the Public Prosecutor's Political Department emphasised that they had nothing against Instandbesetzer (literally meaning; 'renovating squatters' /a word used by the squatters in a general sense, but often used by the authorities to differentiate between good hardworking peaceful squatters and mere Besetzer) only against violent criminals, against whom they intended to proceed with all 'severity'. This strategy —draconian sentences for alleged stone throwers, mild sentences for the 'peaceful majority' —also reflected public opinion at the time. Due to the growing housing problem, the massive number of empty apartments and the scandalous practices of a widespread building mafia, large sections of the public accepted the legitimacy of squatting. And the politicians and lawyers were forced to admit that it was the squatting and mess trespass which had brought this situation to the notice of the public.

Some jurists even went so far as to say that the 'peace' of an empty house could not be 'breached' Erich Kuchenhoff, the well known criminal law expert at the University of Munster, was saying that an empty house had no 'peace' which could be breached. "By not fulfilling the social duty that the right to property entails,” he declared, “the owner of a house deliberately left empty forfeits the protection of the criminal law". Several judges in West Germany dismissed charges of Hausfriedensbruch against squatters on these very grounds. One judge in Lower Saxony found in the case of a house which was waiting to be demolished that the squatters could not have infringed on the owners rights and dismissed the case. These judicial speculations never became precedents, but they did indicate a political climate in which the squatting movement was treated with some respect.

In Berlin, the Public Prosecutor's Office only acquitted to the official Senate policy of restraint after considerable pressure. But when, early in 1981, the Christian Democrats took over the city government, that policy changed. And from then on the instruments for dealing with the squatters were to be demolition balls and the batons of the police. It was then too that the 'movement' began to decline and the hard line of the Political Department reemerged.

On September 22 of that year Innersenator Lummer had eight houses evicted. In the Knobelsdorfer Strasse in Charlottenburg, the police noted the names and addresses of the 180 people they detained during the operation and the Public Prosecutor's Office brought charges of Hausfriedensbruch against eight of them. The justification given for picking out these eight was that “the accused must be seen as habitual offenders". In other words, they had already had their names and addresses taken by the police during raids on other houses.

In other cases, people were prosecuted as 'habitual offenders' because the police had found them several times in the same house during repeated raids. The use of the term 'habitual' was obviously purely arbitrary. Thus, because of the high number of raids and identity checks that were carried out by the police, it was possible to charge large numbers of squatters with Hausfriedensbruch, even though official Senate policy was still that in simple cases of Hausfriedensbruch no charges would be brought.

On May 8 1983 a police patrol reported the occupation of a house in Spandau. The house was due to be demolished. Four policemen entered the building, found the stairs to the loft barricaded and eventually let themselves in though a hole in the roof. The squatters they found in the attic, were, according to their own official statements “peaceful" and the officers were certain they presented no threat of danger to them".

The 13 women and men allowed themselves to be detained and have their identities checked without offering any resistance. Their action, which the police also saw as symbolic, lasted about half an hour. The Public Prosecutor's Office informed the owner of the building of his right to bring charges of Hausfriedensbruch but the owner wasn't interested in doing so. But in August of that year, Public Prosecutor Dohms had the arresting officers interviewed again. This time he was interested in the barricades, and after the interviews, had the squatters charged with 'resisting police officers in the course of their duty'. The court subsequently found them guilty and they were sentenced to between 20 and 40 days, or pay a fine equalling DM 10 a day. This was a relatively new development.

Now, while the charge of Hausfriedensbruch can only be brought on application from the house owner, the charge of 'resisting police officers in the course of their duty', can be brought by the Public Prosecutors Office alone. Thus, the charge gives them full freedom of action in cases in which the owners have no interest in prosecution. . . and it is a legal concept which can be interpreted very broadly!

In fact it is interpreted in such a manner that it can in the majority of cases, be used against most squatters. Because, as in the above example, there does not have to be any active or physical resistance to the police, it is enough if the police are merely hindered in some way while in the act of entering a house.

Barricades, many of them purely symbolic, were erected in many of the houses which were evicted. And now the Public Prosecutor's Office is using this pretext to bring charges against more and more squatters.

To have held out for a long time in a house which was due to be demolished the people must have really wanted to live and to work there, and were thus totally dependent on supplies of electricity, gas and water. When the police searched a house in the Eylauer Strasse in Kreuzberg they found that the electricity and water supply had been illegally turned on. And subsequently both water and electricity companies brought charges of theft against the squatters. Later, the squatters began negotiations with them in order to get legal supplies and paid the outstanding water bill - whereupon, the complaints against them were withdrawn. But the Public Prosecutor's Office informed the water company that “the act of theft could not be invalidated by any later compensation”. The court eventually fined the squatters between DM 500 and 1,000, the additional charge of Hausfriedensbruch becoming then a merely minor matter.

Similar prosecutions and sentences followed in other cases, and through the use of charges of theft, the squatters were shoved from the area of political i-criminality into that of normal criminality, no account being taken of their political motivation.

Thousands of ex-squatters are now facing charges similar to those listed above. And there has been a definite tendency for the severity of the sentences to increase. In the early days, fines equalling 20 days in prison were the rule, now fines equalling anything from 50 to 80 days in prison are not exceptional. And in cases of 'resisting this police in the course of their duty' suspended sentences of up to nine months have been passed.

And it's not a case of passing exemplary sentences in order to deter others - it is more a ease of the state revenging itself on a movement which dared to question its rules, particularly its most sacred rule: the law guaranteeing the right to private ownership of property. The understanding once expressed, under political pressure it must be admitted, for the laudable motives of the squatters has disappeared. And just as the broad interpretation of the laws against 'intimidation' and 'duress' has led to the convictions of large numbers of peace demonstrators, so too has the Berlin Public Prosecutor's Office made the criminal law into a weapon to criminalise mass civil disobedience. The victory of 'law and order' over a movement which understood democracy and politics to be something more than just voting every few years has become perfect. And once again we are shown who has power and who has not.

Already in 1981, Uwe Wesel, the Berlin criminal law professor, was describing the behaviour of the Public Prosecutor's Office as a "war waged by the judiciary against the young generation". And with the Alternative Liste, he went on to demand an amnesty for squatters. As a precedent. he cites the amnesty granted to 5,000 student activists about ten years earlier by a previous Social Democratic Liberal coalition.

A motion calling for such an amnesty in the Senate in 1981 was defeated, and in August of that year Innersenator Lummer announced that as long as the the “squatter problem” had not been solved, any such discussion was a waste of time.

Since then, "the problem has been solved” and the much complained about “spaces outside the law" have ceased to exist. And there is no longer any mention of an amnesty except in the election manifesto of the Alternative Liste. Muller, the head of the Political Department, passes the buck back to the Senate - he himself, only doing his duty as laid down by the Senate. His superior, Oxfort, the Justizsenator, says that it is a matter for the federal authorities in Bonn. Amnesties, he says "can only be justified with regard to acts against the law which were committed at a time of general national emergency, the prosecution of which would be seen as unjust at a later date'', and that no such emergency situation existed with regard to squatting.

So, the since the housing shortage caused by speculation and empty apartments was not an emergency, those who protested against it could only have been criminals. 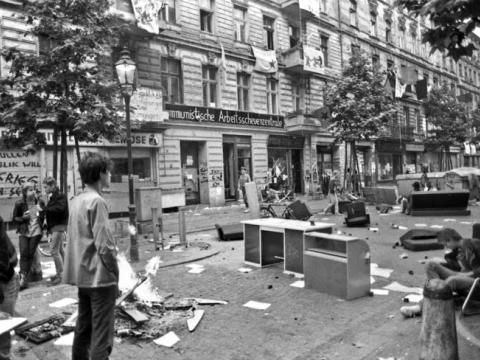 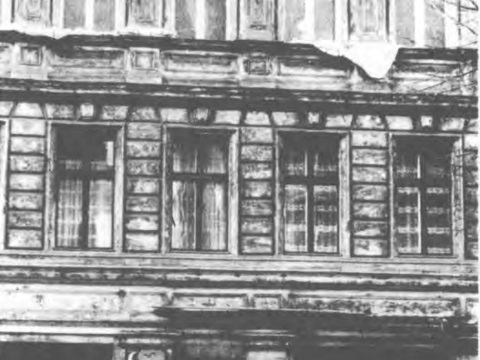