A walkout at the World Cup venue in South Africa has been met with police violence as unions threaten to spread the strike.

Organisers called in police after stadium staff left their posts in a row with the Stallion Security Consortium.

Fights broke out outside Durban’s Moses Mabhida stadium on Sunday night and riot police charged the strikers to restore order.

Tear gas and rubber bullets were fired and two police percussive grenades were set off to disperse demonstrators in the stadium car then involved in confrontations with about 100 police officers in nearby streets.

At least one woman was hurt and two stewards were arrested.

The ugly scenes came soon after the final whistle blew on Germany’s 4-0 win over Australia.

Fans witnessed the fighting as they made their way out. Yesterday security staff representatives walked out of peace talks with the World Cup organising committee and Stallion.

Chief World Cup organiser Danny Jordaan said: ‘Although we have respect for workers’ rights, we find it unacceptable for them to disrupt match day proceedings and will not hesitate to take action again.’

The unrest could spread, affecting other venues where Stallion’s stewards are meant to be on duty.

And it could now escalate into a nationwide walk-out. South African public service unions, representing 1.2million workers, are threatening a national strike ‘in the middle of the World Cup’.

The Public Servants’ Association wants an 8.5 per cent rise in wages, having rejected a 6.2 per cent increase.

They say police, nurses, teachers and immigration officials could stage a walk-out unless talks this Friday bring progress.

This is going to sound crazy, but this is from Metro and it's the best coverage I could find. Please post up other links as you find them

I'm told that on Wednesday Abahlali baseMjondolo and the striking stewards got together in Durban and put together a march of 3000 people against the corporate World Cup. There was no police violence this time. 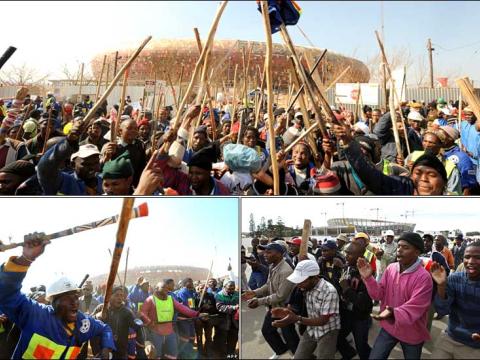