Four unions called a general strike for today against French President Macron’s new employment law, this is often referred to as Macron 2 or Macron XXL, because he was behind the last revision referred to as the ‘Loi El-Khomri’ and this new law is even worse.

The law allows for changes to employment contracts in small businesses if 2/3 of the workers agree. It introduces maximum payments, based on age, seniority and employment prospects, for employment tribunals ranging from 1 to 22 months salary. He is also allowing expanding businesses to not increase employee representation, currently once certain numbers of employees are reached the employer is forced to allow the to elect representatives, create staff committees etc. It will reduce legal obligations to involve unions in negotiations. The law will also allow workers to agree to worse conditions than the ‘code du travail’ allows, at the moment agreements can only be made if they improve conditions. For example an employer can agree a bonus for difficult work but can’t withdraw an antisocial hours payment.

CGT, Solidaires, FSU1 and UNEF all took part in the action.

According to the government 3.29% of teachers went on strike and they are claiming that only 7 schools were closed.

In the Paris region: on the RER trainlines service was bewteen half and two thirds of a normal day. The TER trainlines were less affected.

In the Côte d'Azur and Provence half of the trains were not running, in the Nord (two thirds were cancelled due to strikes, in Sarthe a third and a third in Franche-Comté.

In spite of claims by the Civil Aviation Authority that there would be no effects there were delays and cancellations at Nice-Côte d'Azur, Marseille, Toulouse, Paris-Orly and Paris-Charles de Gaulle airports and possibly others.

In Caen 3000-6000 people were on strike including private-sectors workers, there was a lot of talk of solidarity as Macron will be coming for everyone sooner or later.

According to the newspapers a ‘festive atmosphere’ in Paris was interrupted by incidents when members of a ‘masked bloc 300-strong began throwing projectiles and the police responded with tear gas. The ‘anti-repression co-ordination’ group at the Paris march gave out a number so people could report arrests, police actions and movements etc.

The following timeline is based on one published by Paris-luttes so unless another city is mentioned it was in Paris:

-Several Lycées in Paris and the surrounding region were blockaded by students in the morning, although some re-opened after strikers left to go to the marches. There was an AG2 at Paris 8 university of 50 people.

-At 12 :30 the police started to search some people at République, where the march was due to start. At 1pm 100 school students arrived, the police presence was light but with many units on stand-by. Bastille Station was closed shortly afterwards at the request of police. Meanwhile in Lyon the head of the march was separated and kettled by police. Union organisers tried to negotiate the release while those in the kettle were hit and tear gassed, at least five injured. The CGT refuse to move until the kettle is lifted, an hour later they ar efinally released but only after “contrôle complet” which means, ID documents and a full search, at least two arrests.

-By 1:30 the school students group at République had grown to 300 and set off for Bastille. There was a group of 100 students at Jussieu university campus. At Bastille the Union vehicles were setting up and the WITCH bloc was forming3 The Witch block marched behind a banner ‘Macron au Chaudron’, meaning Put Macron in the Cauldron. 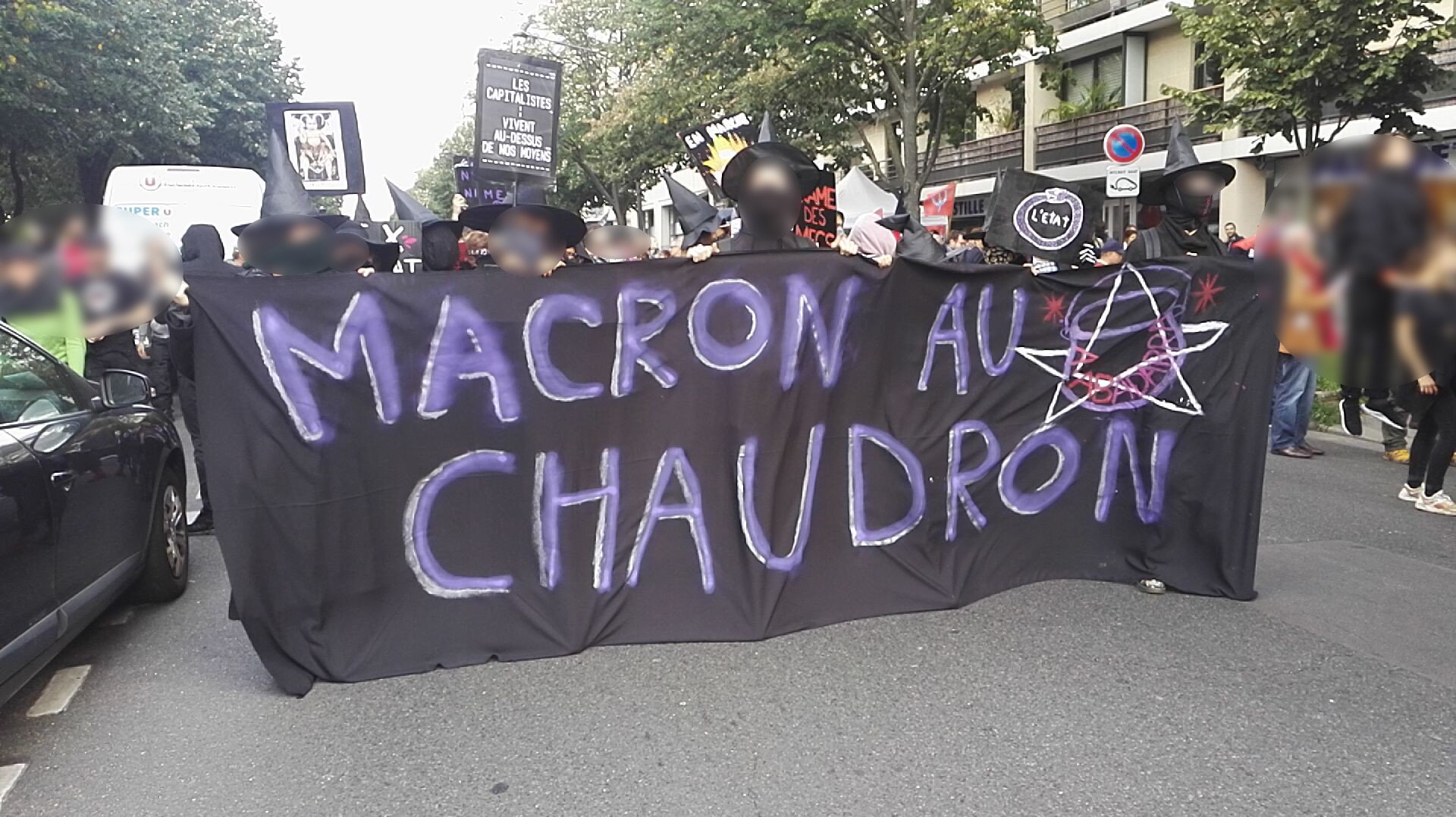 -Shortly afterwards the school students arrived at Bastille “Everyone hates the decrees” 4 and “ ah anti anti-capitalist”, at the same time 150 students were kettled at Jussieu and forced to submit to searches.

-2pm marches have started, WITCH bloc at the head of the march, the school students often take this position but this time they didn’t try. There is a ‘Forain’ group with a truck with speakers and at least 100 marchers. Shortly afterwards the Jussieu group links up with the march.

-2:30 the head of the march has hundreds of people and has been steadily growing, they are nearly at the Pont d’Austerlitz where a water cannon has been stationed.

-3pm 5000 heading the march of which 1000 are black bloc. Reports arrive from Tours, where 5000 people demonstrated, several schools were closed and 25% of drivers on public transport joined the strike.

-3:10 the head of the march arrives at SaintMarcel where the police have blocked the road with anti-riot shields. The tail of the march is still at Bastille and the marchers are numbered in the tens of thousands. 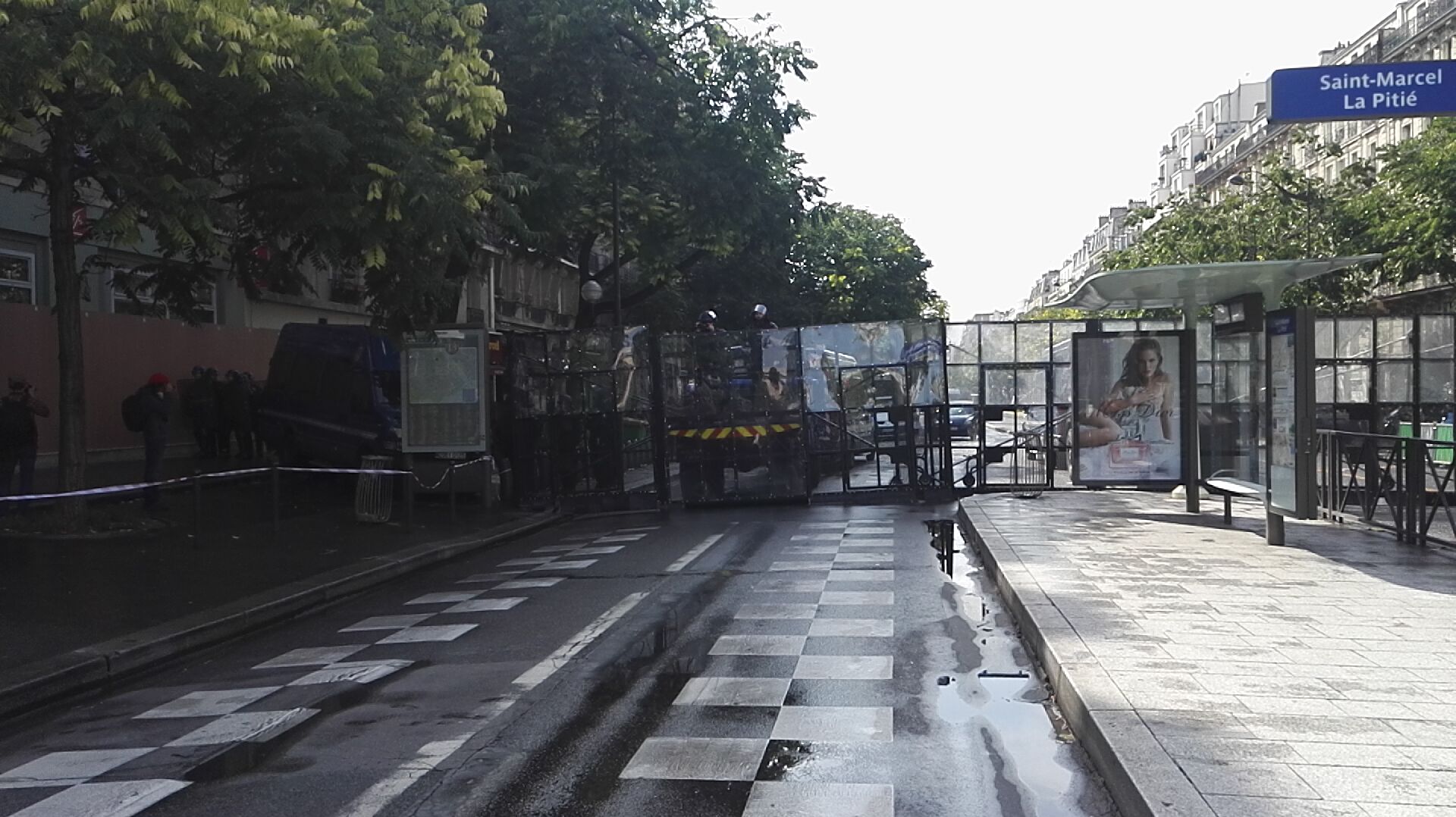 -3:30 banner raised calling for a solidarity demonstration next week for those arrested when a police car was burnt during the protests against the employment law last year. Police start ramping up provocation, striking people with buckler shields as they pass. Marchers maintain discipline. 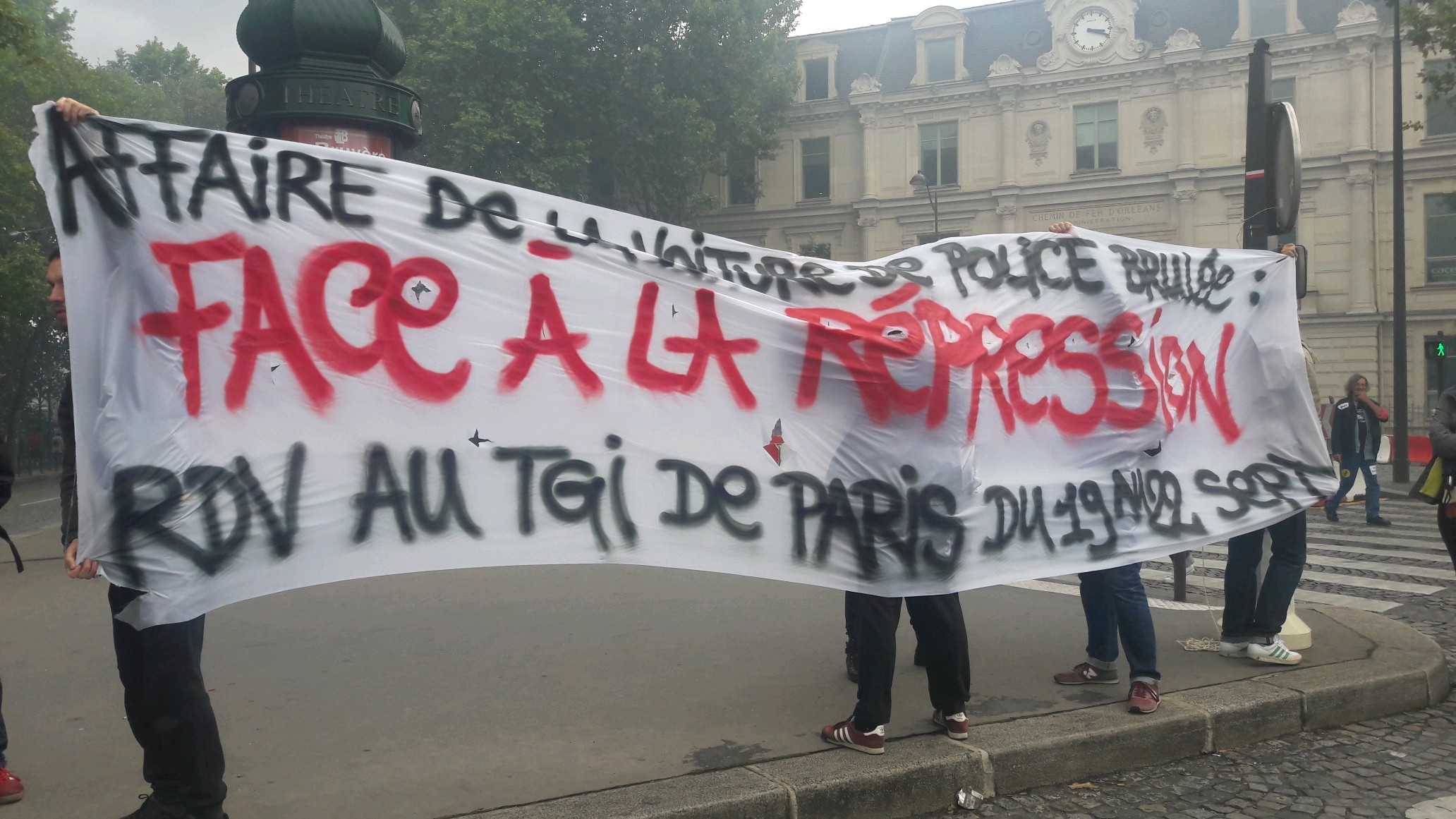 -3:40 the head of the march is ten thousand-strong, the police attack using tear gas and sting-ball grenades 5 , demonstrators throw stones. The head of the march is temporarily split in two but is able to reunite before the police can exploit it. Place de la Bastille is still full. The ‘Forain’ group begin to sing the Marseillaise again, chants immediately go up “Everyone hates the Marseillaise”

- 4pm Attacks led by CRS using gas and sting-ball grenades, supported by a water cannon which drives a wedge into the march, separating a group. The cannon is pushed back by a molotov cocktail but the police drive people back with sting-ball grenades and make arrests, supported by the CGT’s Service d’Ordre, a movement including lots of the ‘forain group drives the cops back and the marchers manage to reunite, some are de-arrested.

- 4:30 the march arrives at Place d’Italie, the police are blocking the exits, but allow people to leave singly without searches.

Aside from the much-photographed WITCH block, many banners made reference to Macron’s statement that he wouldn’t give in to “les fainéants, les cyniques et les extrêmes”, the lazy, the cynics and the extremists. The placard below: “Too lazy to think of a slogan” 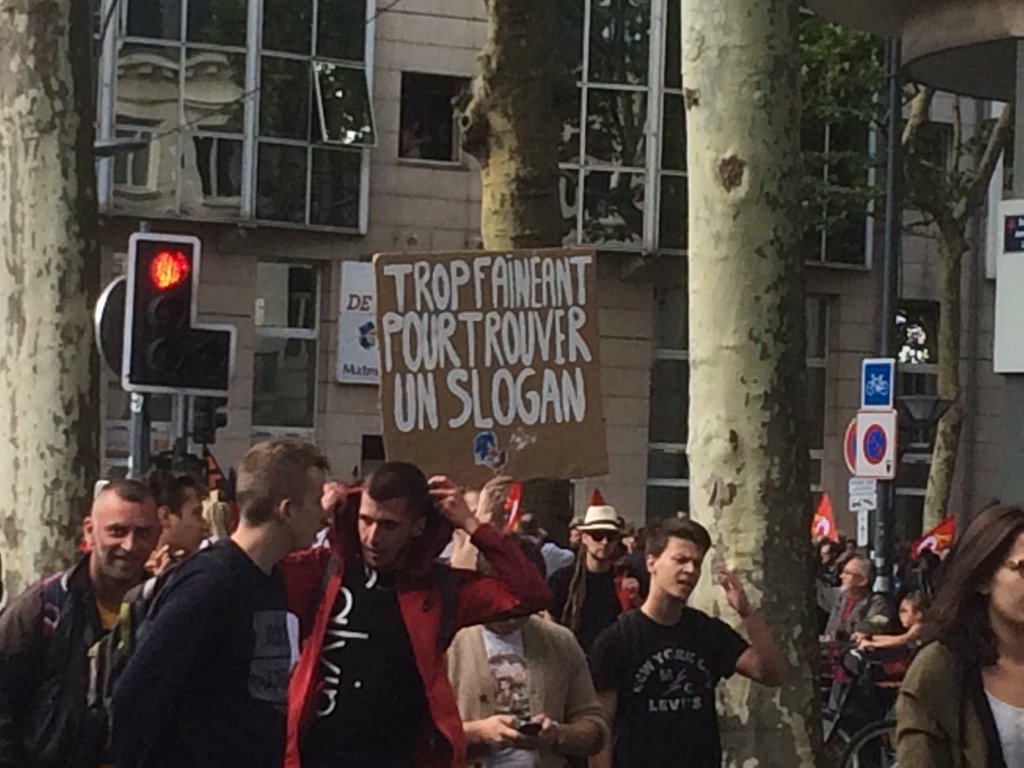 Although the CFDT and FO weren’t officially striking some of their members participated.

The CGT Service d’Ordre are openly carrying weapons on the march as usual. They complain about marchers not following them and leaving them behind, they are mocked and in the course of some back and forth one of them says that he is a cop, surprising some CGT militants, it turns out that the police union branch Vigi makes up part of the service d’ordre and they are the ones rushing to help arrest people when the march is attacked by the CRS.

The ‘Roi des Forains’6 called for blockades, and claimed that 10000 trucks were blocking roads across the country and 500 in Paris. The major roundabout at Etoile was blocked at around 7am and there were reports of blockades and go slows throughout the day.

The presence of Socialist Party figures such as Bernard Hamon, the secretary of the PCF, , and the leader of France Insoumise Jean-Luc Mélenchon, showed the interest of the left political parties in recuperating these protests, especially the Socialist Party who are still reeling from dropping into fifth place in the presidential and being destroyed in the legislative elections, five of their MEPs were also present at marches.

Great report, thanks for writing it up and posting!

BBC reported a quarter of a million on the streets, with rioting in Paris with "hooded youths", but said that the effect of strikes was limited. They did say that Macron's approval ratings were down from 62% to just 40% in a matter of months. I guess will have to see if the protests can be escalated to the point of bringing this law down. Fingers crossed!

Absolutely brilliant, mate! Thanks for this, really informative!

Clermont-Ferrand (Auvergne): Between 3.000 and 4.000, mostly CGT, SUD-Solidaires, FO, FSU. CGT, SUD, FO from the Michellin tyre factory, CGT from Vittel. No libcom presence apart of 4 or 5 people from Alternative Libertaire (AL) and another handful of the Coordination des Groupes Anarchistes (CGA). The CNT-AIT local didn't show up or at least was not visible. We marched with SUD-Solidaires who had a pretty strong presence with some 700 to 800. The speakers did not give any strike news but told, that two companies are beeing blocked by the workers.

Just quickly, is there a typo in the fourth para about CGT numbers?

Rat put up a gallery of them previously and other posters, including battlescarred put up a few texts explaining their role and history.

Robot, are you living in France now? Are you in AL?

No, I am not living in France now ;-) I just happen to be here for holidays like almost once a year. But if I'd live here, I would join the CNT-F and not AL...

Sorry to be a party-pooper, but I think this article is yet another example of "the other comrade's grass is always greener" as far as the class struggle in France is concerned...

Yes, there was quite a big demo. But even to say that "four union [confederation]s called a general strike" is really just repeating CGT propaganda (it was really a CGT show even if the other union confederations nominally joined in). Yes, there were some workers on strike on the national rail network (SNCF), but in Paris the surburban rail (RER, RATP), the metro, the buses and the trams all ran pretty much as normal. What's more, there seemed to be almost no strike action in the private sector.

In short, even less of a "general strike" than the TUC "days of action" used to be in the UK...

The article is based entirely on French sources, obviously the CGT is trying to spin this as much as possible and I've tried to avoid that. The article is admittedly optimistic, as are the sources it draws on, but I think the information is accurate.

SNSP (National union of public security, obscure union) as well as two other police officers' groups called for demonstrations on the 16th.

It seems pretty poorly organised with a few images on a facebook page.

"It's great to whinge on facebook;... I expect to see your faggot faces on the streets..."

I haven't managed to find any evidence that they actually did make it onto the streets.

And two weeks ago Macron dropped housing benefit by five euros a month, affecting 6.5 million households. This was his response to the difficulties this will cause:

"No one thanked the state for raising these allowances by five euros a few years ago for one simple reason: landlords raised rents by 5 euros. I am surprised by the collective silence, no one is calling on housing associations and landlords to lower rents, that is collective responsibility, that's what needs to happen from the first of October, Publicly call on landlords to lower rents if you want to help people: the state shouldn't pay for everything." 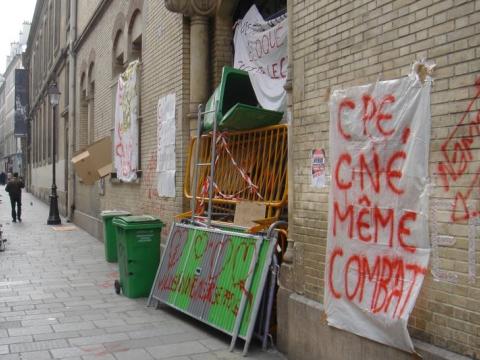 Photos of the school occupations and street protest in Paris on March 16th. Most photos in these…