Stuart Christie's account of his actions in a Franco assassination attempt, 1964

An extract of Stuart Christie's book Granny Made Me An Anarchist which describes his involvement in an attempt to assassinate Spanish dictator General Franco. He describes his experiences from picking up the plastic explosive in France to his arrest by Franco's police in Spain.

'My stomach churned. Something had gone badly wrong ...'

By August 6 1964, everything was ready for my mission. My ticket had been booked on the night train from Paris to Toulouse. I met Bernardo and Salvador, my Spanish anarchist contacts from London, at the place d'Italie, and from there we walked down the rue Bobilot and into a narrow and neglected side street with grubby grey tenements.

Checking to ensure we had not been followed, Salva gave a prearranged knock on the curtained street-floor window and, when the door opened, we filed quickly through the dark and narrow hallway and into the front room. This was the quartermaster's stores, where the weapons, explosives and forged documents could be kept with some degree of safety.

Three people were already in the room. Two were seated, one of whom I recognised as Octavio Alberola, the charismatic coordinator of the underground anarchist group Defensa Interior, and the man on whose shoulders lay the responsibility for killing Franco.The third man, referred to as "the chemist", was standing by the sink wearing rubber gloves, measuring and pouring chemicals.

Being thirsty, I went to the sink for water, and was about to put a glass to my lips when the chemist turned round and saw what I was doing. He shouted at me to stop and rushed across, removing the glass carefully from my hands, explaining that it had just been used for measuring pure sulphuric acid.

Shaken, I stood back to lean on the sideboard and went to light a cigarette. This triggered another equally volcanic reaction from the chemist as he explained that the sideboard drawer was full of detonators. I retreated to the table, and was very cautious after that.

The chemist placed on the table five slabs of what looked like king-size bars of my granny's home-made tablet (a crumbly Scottish toffee similar to butter fudge), each containing 200 grams of plastic explosive, along with detonators.

Alberola went through the details of the operation while Salva translated. My job was to deliver the explosives to the contact, together with a letter, addressed to me, which I was to collect from the American Express offices in Madrid. Then, at a rendezvous in the plaza de Moncloa, the contact would identify me by a handkerchief wrapped around one of my hands. He would approach me and say, "Qué tal?" ("How are you?"), to which I was to reply, "Me duele la mano" ("I've a sore hand").

I spoke no Spanish, so to avoid the embarrassment of forgetting my lines and unloading a kilo of high explosives on the first friendly Spaniard I met, Octavio wrote the words down for me, along with all the instructions. (This was, with hindsight, extremely foolish.) Once the contact had identified himself, I was to hand over the parcel, together with the letter, and leave immediately.

My train pulled into Toulouse station shortly before dawn on Friday August 7 after a clammy and uncomfortable night. After a hurried coffee and croissant I caught a train to Perpignan. Here, I prepared myself for crossing the border; I would hitchhike the rest of the way to Madrid.

The best way to take the explosives in, I thought, was on my body, not in my rucksack in case it was searched by a punctilious customs officer. In Perpignan, I found the public baths and paid for a cubicle. After a hot soak, and still naked, I unpacked the slabs of plastique, and taped them to my chest and stomach with Elastoplasts and adhesive tape. The detonators I wrapped in cotton wool and hid inside the lining of my jacket.

With the plastic explosive strapped to me, my body was improbably misshapen. The only way to disguise myself was with the baggy woollen jumper my granny had knitted to protect me from the biting Clydeside winds. At the risk of understatement, I looked out of place on the Mediterranean coast in August.

I walked through the outskirts of Perpignan until I came to a junction with a road sign pointing to Spain. After what seemed like hours, a car pulled over. It was driven by a middle-aged English commercial traveller from Dagenham. He was going to Barcelona.

It soon became apparent that his charity was driven to a large extent by enlightened self-interest. Every few kilometres the old banger would chug to a standstill and I would have to get out in the full blast of the August Mediterranean sun and push the bloody car up the foothills until we got it bump-started. Between pushing a car uphill and granny's jumper, the sweat began rolling off me. Waterproof tape was yet to have been invented, and the cellophane-wrapped packets of plastique began slipping from my body. I had to keep nudging them up with my forearms.

Traffic was heavy when we reached Le Pérthus, the busiest of Spain's frontier mountain passes. This was where we would have to clear a customs check. On the other side was fascist Spain.

After queuing for a bowel-churning eternity, I had to push the car on to the ramp while my companion steered. I pulled my jumper taut and waited with my heart in my mouth while two dour-faced Civil Guards with shiny patent-leather three-cornered hats and sub-machine guns at the ready looked me up and down. I handed my passport over to the border guard while the customs officers examined the boot and searched behind the seats of the car.

"Why have you come to Spain?"

"Turista!" I replied, hoping my accent didn't make it sound like "terrorista".

A pair of dark eyes looked at me suspiciously for a moment before the stamp finally descended on the passport.

The car made it as far as Gerona's main square, where it broke down again, this time in the middle of the rush hour. Eventually we got going again and before I knew it we were driving through the dilapidated red-roofed outskirts of industrial Barcelona.

"I never thought we'd make it," said my companion.

"Neither did I," was my reply.

We said goodbye and went our separate ways.

The possible dates for my rendezvous in Madrid were from Tuesday 11 to Friday 14 August. I left Barcelona on Monday, this time keeping the explosives in my bag. I could have flown or taken the train, but I enjoyed hitch-hiking and it also meant I would have a bit more money in the event of any emergency.

My destination in the capital was the American Express office. Instead of going to the railway station for a left-luggage locker and leaving my rucksack there, which is what a more experienced anarchist would have done, I swung it on to my back and strolled down the carrera San JerÃ³nimo to collect the letter for my contact.

It was siesta time and the streets were quiet. Turning the corner to enter the American Express office, I was immediately aware of three smartly dressed and tight-lipped men in heavy-rimmed sunglasses standing by the entrance muttering among themselves. I breathed deeply and tried to control my anxiety. Walking past this group, I went into the American Express office where I asked for the poste restante desk. A clerk pointed me in the direction of a desk at the far end of the room.

Handing my passport to the receptionist I asked whether any letters were waiting for me. At this same moment I noticed out of the corner of my eye two men and a woman sitting in an alcove to my right. Again, I knew immediately they were police. The blood and lymph drained from my face and heart. My stomach churned. Something had gone badly wrong.

The girl with my passport found my letter among the tightly packed trays behind her and pulled it out. As she did, I noticed it had been marked with a pink piece of paper the size of a bookie's slip. The woman from the alcove, a supervisor, approached the girl, now bringing the letter to me, said a few words to her and removed the slip.

What was in the letter? How much did they know? Would I be arrested there or would they wait until I had met my contact? But if they knew about the Amex pick-up, they probably knew the details of my rendezvous as well.

The supervisor handed the slip to the girl, indicating she should take it across to the two men in the alcove. The supervisor then handed me the letter and my passport. I turned to see the two men from the alcove quickly walking out. I made a mental note to shaft American Express at every conceivable opportunity, if I were ever again offered an opportunity.

My diaphragm tightened even more and my heart thumped like a tight Lambeg drum. Yet I felt curiously detached as I took a deep breath and walked out of the office, trying to keep my face expressionless. Mustering all the confidence I could, I paused at the doorway to look at the group of five men now standing to one side of the entrance. Until I appeared at the doorway they had been deep in conversation. They stopped briefly, exchanging knowing looks with one another, and carried on.

Attempting the jaunty air of a well-heeled tourist who had just cashed his letters of credit, I walked back the way I had come, and as slowly as I could. I had only gone a few yards when the knot of men began to follow me up the street, still talking among themselves. My eyes darted everywhere, desperately searching for any opportunity to escape. I continued up the carrera San Jeronimo, stopping to peer in shop windows I passed, as though I was window shopping, but in fact to see how far they were behind. They had allowed me a 20 yards' start before moving, and they kept to that distance.

An empty taxi pulled in to the pavement beside me. But when the driver appeared to invite me to get in, I knew it was an undercover police car. I was being hemmed in.

By this time I had reached the corner of the busy calle Cedaceros. As I steeled myself to make a dash through the crowds I was suddenly grabbed by both arms from behind, my face pushed to the wall and a gun barrel thrust into the small of my back. I tried to turn my head but I was handcuffed before I fully realised what had happened. It was all over in a matter of moments.

This extract first appeared in The Guardian newspaper on Monday August 23, 2004 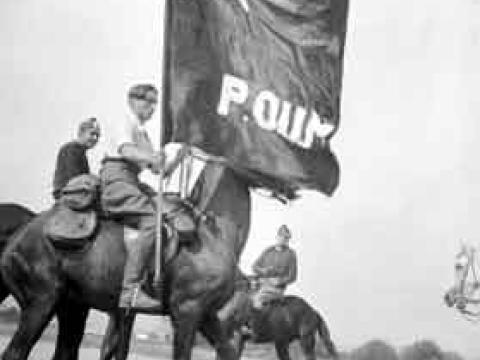 George Orwell's famous 1938 account of the Spanish Revolution and Civil War, from his point of view as a volunteer in the POUM militia.
Image

Lithuania-born Jewish anarchist Emma Goldman's book on the degeneration of the Russian Revolution of 1917-1921.
Image 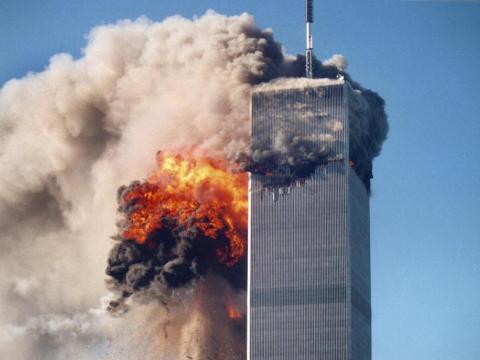 A clear explanation of why anarchists oppose terrorism, and why terrorism or propaganda by deed can…
Image 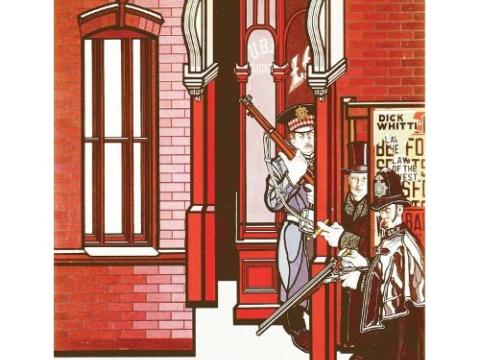