A friend in Canada recently asked me if the Sixties’ protests had any important lessons to pass on to the Occupy movement.

I told her that one of the few clear memories that I retain from 45 years ago was a fervent vow never to age into an old fart with lessons to pass on.

But she persisted and the question ultimately aroused my own curiosity. What, indeed, have I learned from my fumbling-and-bungling lifetime of activism?

Well, unequivocally I am a pro at coaxing 1,000 copies of a flyer from a delicate mimeograph stencil before it disintegrates. (I’ve promised my kids to take them to the Smithsonian someday to see one of these infernal devices that powered the civil rights and anti-war movements.)

Other than that, I mainly recall injunctions from older or more experienced comrades that I’ve put to memory as a personal Ten Commandments (like you might find in a diet book or inspirational tract). For what it's worth:

First, the categorical imperative is to organize or rather to facilitate other peoples’ self-organization. Catalyst is good, but organization is better.

Second, leadership must be temporary and subject to recall. The job of a good organizer, as it was often said in the civil rights movement, is to organize herself out of a job, not to become indispensable.

Third, protesters must subvert the media’s constant tendency toward metonymy -- the designation of the whole by a part, the group by an individual. (Consider how bizarre it is, for instance, that we have "Martin Luther King Day" rather than "Civil Rights Movement Day.") Spokespeople should regularly be rotated and when necessary, shot.

Fourth, the same warning applies to the relationship between a movement and individuals who participate as an organized bloc. I very much believe in the necessity of an organic revolutionary left, but groups can only claim authenticity if they give priority to building the struggle and keep no secret agenda from other participants.

Fifth, as we learned the hard way in the 1960s, consensual democracy is not identical to participatory democracy. For affinity groups and communes, consensus decision-making may work admirably, but for any large or long-term protest, some form of representative democracy is essential to allow the broadest and most equal participation. The devil, as always, is in the details: ensuring that any delegate can be recalled, formalizing rights of political minorities, guaranteeing affirmative representation, and so on.

I know it’s heretical to say so but good anarchists, who believe in grassroots self-government and concerted action, will find much of value in Roberts’ Rules of Order (simply a useful technology for organized discussion and decision-making).

Sixth, an "organizing strategy" is not only a plan for enlarging participation in protest but also a concept for aligning protest with the constituencies that bear the brunt of exploitation and oppression.

For example, one of the most brilliant strategic moves of the Black liberation movement in the late 1960s was to take the struggle inside the auto plants in Detroit to form the League of Revolutionary Black Workers.

Today, "Occupying the Hood" is a similar challenge and opportunity. And the troops occupying the plutocrats’ front yard need to respond unequivocally to the human-rights crisis in working-class immigrant communities.

The immigrant rights protests five years ago were amongst the largest mass demonstrations in U.S. history. Perhaps next May Day we will see a convergence of all movements against inequality on a single day of action.

Seventh, building movements that are genuinely inclusive of unemployed and poor people requires infrastructures to provide for basic survival needs like food, shelter, and healthcare. To enable lives of struggle we must create sharing collectives and redistribute our own resources toward young frontline fighters.

Similarly we must renew the apparatus of movement-committed legal professionals (like the National Lawyers Guild) that played such a vital role in sustaining protest in face of mass repression in the 1960s.

Eighth, the future of the Occupy movement will be determined less by the numbers in Liberty Park (although its survival is a sine qua non of the future) than by the boots on the ground in Dayton, Cheyenne, Omaha, and El Paso. The geographical spread of the protests in many cases equals a diversifying involvement of people of color and trade unionists.

The advent of social media, of course, has created unprecedented opportunities for horizontal dialogue among non-elite activists all over the country and the world. But the Occupy Main Streets still need more support from the better resourced and mediagenic groups in the major urban and academic centers. A self-financed national speakers and performers bureau would be invaluable.

Conversely, it is essential to bring the stories from the heartlands and borders to national audiences. The narrative of protest needs to become a mural of what ordinary people are fighting for across the country, e.g., stopping strip-mining in West Virginia; reopening hospitals in Laredo; supporting dockworkers in Longview, Washington; fighting a fascist sheriffs’ department in Tucson; protesting death squads in Tijuana; or global warming in Saskatoon; and so on.

Ninth, the increasing participation of unions in Occupy protests -- including the dramatic mobilization that forced the NYPD to temporarily back down from its attempt to evict OWC -- is mutually transformative and raises the hope that the uprising can become a genuine class struggle.

Yet at the same time, we should remember that union leaderships, in their majority, remain hopelessly committed to a disastrous marriage with the Democratic Party, as well as to unprincipled inter-union wars that have squandered much of the promise of a new beginning for labor.

Anti-capitalist protesters thus need to more effectively hook up with rank-and-file opposition groups and progressive caucuses within the unions.

Tenth, one of the simplest but most abiding lessons from dissident generations past is the need to speak in the vernacular. The moral urgency of change acquires its greatest grandeur when expressed in a shared language.

One extraordinary example was Sinclair’s nearly successful campaign for Governor of California in 1934. His manifesto, "End Poverty in California Now," was essentially the program of the Socialist Party translated in New Testament parables. It won millions of supporters.

Today, as the Occupy movements debate whether or not they need more concrete political definition, we need to understand what demands have the broadest appeal while remaining radical in an anti-systemic sense.

Some young activists might put their Bakunin, Lenin, or Slavoj Zizek temporarily aside and dust off a copy of FDR’s 1944 campaign platform: an Economic Bill of Rights.

It was a clarion call to social citizenship and a declaration of inalienable rights to employment, housing, healthcare, and a happy life -- about as far away from the timid concessionary Please-Just-Kill-Half-the-Jews politics of the Obama administration as might be envisioned.

The fourth-term platform (whatever opportunistic motivations existed in the White House) used the language of Jefferson to advance the core demands of the CIO and the social-democratic wing of the New Deal.

It was not the maximum program of the Left (i.e., democratic social ownership of the banks and large corporations), but certainly the most advanced progressive position ever espoused by a major political party or U.S. president.

Today, of course, an Economic Bill of Rights is both an utterly utopian idea and a simple definition of what most Americans existentially need.

But the new movements, like the old, must at all cost occupy the terrain of fundamental needs, not of short-term political "realism."

In doing so, why not accept the gift of FDR’s endorsement.

He had me going pretty well until the part about FDR.

What I'm finding hard is working with liberals who still cling to capitalism. We actually had an encampment going and the liberal members tried to stop it. How do we work with these people?

I think this is a very very good start. If we are going to build a movement we must realize that it will not advocate what we advocate - at least right away. How we present FDR's Economic Bill of Rights could make the difference between it becoming a tool for the liberals to eventually undo us or whether we can keep it independent.

1. Pretty vague statement. Not sure what it means.

2. Depends what is meant by leadership, but I agree.

4. Agreed, and this is where I disagree with elements of platformism and typical left-wing mass movement tactics. But, at the same time, informal blocs exist and they can be every bit as effective as formal blocs, so in the end, this kind of doesn't matter.

6. It's inaccurate to try and insinuate that the 'black liberation movement' came up with an 'organizing strategy' to organize black workers in the Detroit factories. That movement was incredibly diverse and that type of coordination did not exist. The Black Panthers, US, SNCC, NAACP didn't get together and decide that the Detroit people should hit the factories.

8. Yeah, it's important that these medium sized or often ignored towns and cities have this stuff popping up, but I'm not sure how important. The various Occupys are really uneven when it comes to who is involved and what their general outlook is. In some of the smaller areas, it's really like the Tea Party for moderates and 'dissident' "liberatrians" who feel the Tea Party went too neocon. If nothing happens to develop these people further along, then they are pretty irrelevant to the wider Occupy movement if that is the content of their Occupy and they don't go any further than after work gatherings on public space to be done by 9PM.

One could make the argument that they would reflect a wider sympathy with the more advanced Occupy movements (like those blocking ports, occupy property, etc), though, which is important. 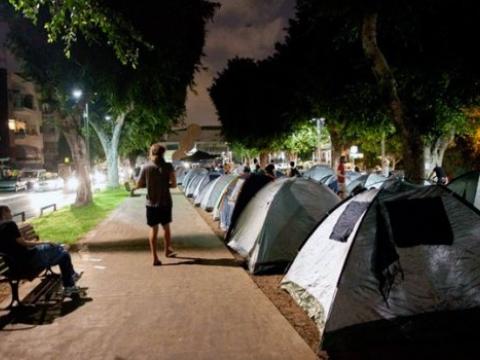 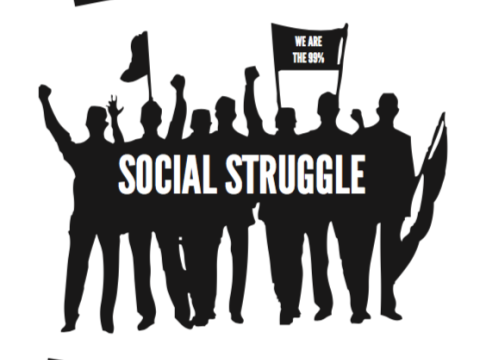 A pamphlet written during the height of the Occupy Wall Street struggles in New York City, which… 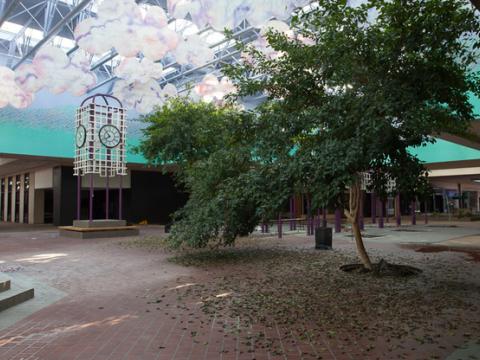 Large demonstrations are planned to push for action on climate change. Here we discuss the potentials and pitfalls of climate populism. 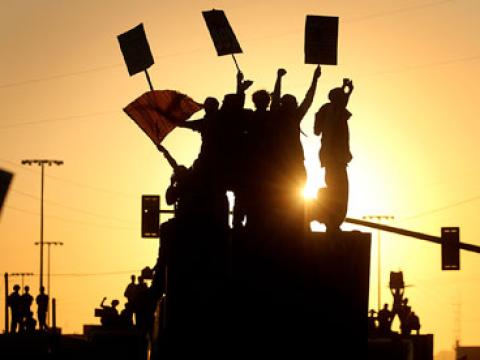 Flyer from the "Occupy" movement's December 12 blockade of West Coast ports in the US, analyzing the blockade, plans for a general strike, and…