Top 10 things to do when you're working at McDonalds to liven up a shift.

Relying on McDonalds for your income may lead you to suffer poverty, cuts and burns, possibly even a breakdown. All this is pretty desperate, but never underestimate the effect of the tedium, the horrific Boredom, the mind numbing monotony. It’s imperative that you think up some ways to pass the time. What you can do on a shift will be largely determined by where you work and how busy it is, but here are a few suggestions:

1. The frozen phallus
Timeless entertainment for the whole family. Take a wet border cloth and mould it into a shape of your choice. The penis is the classic and most obvious option but you could potentially choose anything. Then leave it in the freezer for a few hours before returning to collect a large frozen phallus! Entertain work mates and customers with this amusing prop.

2. Chess
Bring in a travel chess set and find someone else on the shift who wants to play. Hide the set in an obscure place and slip away to make a move whenever you can, before notifying your opponent that you’ve played and waiting to hear from her/ him that it’s your turn. A game can last a whole shift and begin to take on great importance.

3. Who’s really popped a rocket?
A complex and sophisticated game guaranteed to amuse colleagues while frustrating management. Everyone sticks objects down their trousers before another employee has to guess which worker has genuinely hit on a stiffy and who’s just got a border cloth in their pants. This isn’t just a game for the boys, a variation is ‘who’s really been to the freezer and who’s just got things stuffed in their bra?’. VERY IMPORTANT NOTE: Never make anyone play either version of the game if you think they might not want to or might feel pressured into it. Never comment on other people’s bodies if you are concerned it might cause offence or might be experienced as harassment. That shit’s not right. However, having a strong respect for people’s personal boundaries needn’t put an end to workplace flirting. There’s nothing like a bit of sexual tension to get you through the working day. More flirting! More sex between employees! Just make sure that it’s always mutually appreciated and is never done in a way that could be experienced as bullying or hurtful. As a wee aside, the old McDonalds crew handbook used to have a bit that stated “McDonalds do not object to employees dating so long as this does not interfere with their work”. Gee, that’s good of them, just how much do these pricks think they can control us?

4. Bun Tray Roulette
Guaranteed to make a kitchen shift seem shorter. One crew member writes a forfeit on a tray liner and hides the liner in amongst the bun trays. Next, shuffle the trays well before everyone carries on cooking as normal. Whoever exposes the tray liner has to perform he forfeit written on it. It could be anything- “tell the store manager he fucks chickens”, “make romantic overtures to the next customer served at till 5” etc. After completing the forfeit he crew member gets to write down another one, knowing that she/ he could have to perform it as well.

5. Hide and seek
A great fun game that anyone can play. Simply desert your designated station, preferably at a busy time, and take up a position in the obscurest part of the store you can think of. Dream up some half baked reason to be there (“I was on the roof because I was looking for cones...”). After a while a manager will notice you are missing and will try to find you. It’s then up to other crew members to feed the manager as much misinformation as possible: “I saw her in the backroom”, “no, she was wearing her jacket on DA”. Whoever manages to evade service for the longest is declared the winner.

6. Time card bingo
Everyone on front counter gets a bingo card with various numbers on it. The person on wrap and call then puts random time cards in the production bin. “69, everyone’s favourite, etc.”. The rules are just like normal bingo! The beauty of this game is that after a while a stern faced manager will complain “what the fuck’s this supposed to be? Are you playing bingo with the time cards? Which is guaranteed to cause amusement.

7. Buzz word bingo
This one is reserved for crew meetings, rap sessions, etc. Again everyone gets a bingo card but this time instead of numbers the card contains buzz words! For example: “opportunities”, “teamwork”, “profitability”, “family”, “customer satisfaction” and other banal corporate bollocks. Again the rules are otherwise like normal bingo, just tick off the words as the meeting leader inevitably utters them. Be sure to make it obvious that you are playing this game as a way of expressing your total contempt for their pointless, sham meetings.

8. Split the deck
You will need a pack of playing cards. Simply split the deck and whoever gets the lowest card has to take a big sniff of ‘time out’ or some other toxic cleaning substance. After a bit everyone is buzzing out their nut, brilliant! Alternatively you can play this game with a couple of bottles of vodka stashed in the crew room, or with a couple of grams of amphetamines. Substance abuse helps pass the time and staves off the indescribable numbness produced by hours of pointless and degrading tedium.

9. Cross dressing capers
This one started when some female employees (hostesses and FMs) quite rightly got pissed off with being expected to wear skirts just so that senior managers can make them bend over and perv on them. It’s discrimination to make people wear certain clothes on the basis of their sex. So, the same can be extended to the stupid clip on things we’re supposed to wear. Guys swap with girls! Almost instantly a manager will get a wee bit upset: “what are you wearing that for?” “I don’t think my clothing should be determined by gender definitions imposed on me.” “er... what?” “it’s discriminatory to make us wear different clothes because of our biological sex” “eh... well.. you look like a faggot” “oh that’s nothing, you should see the thong I’ve got on” “faggot, goddamned queer, faggot, etc.” At which point you make an official complaint that you are being harassed because of your sexuality. It doesn’t matter whether you’re as camp as a row of tents, a bisexual femme into S&M, or straight as an arrow with a wife and kids, but that’s the point- it doesn’t matter, it’s none of their fucking business... And it’s good for a laugh.

10. And, Courtesy of MWR in Wales...
Also, here are a couple of new scams courtesy of MWR Wales- On a close when its dark, you and a colleague dress up looking like thiefs, take the car keys belonging to the best car owned by a wanker manager, and get someone to scream (example) "your cars being nicked!''. Of course when they run out, simply take the joke as far as you want, whether it be simply putting the key in the ignition, or driving the car around the corner, abandoning it, and returning to your station via the back door! it does work! Also, when you have a manager that gets really stressed grab a mobile ring the store, and tell him/her that you are from a local newspaper and you have received a complaint about spitting in burgers/sexual haraassment/slave labour etc, again take it as far as you want!!!

Original call for an international day of action of McDonalds employees, by the UK McDonalds Workers Resistance group. 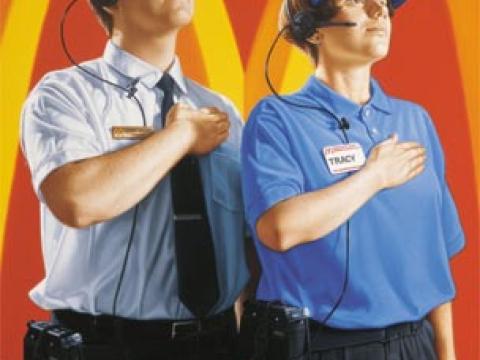 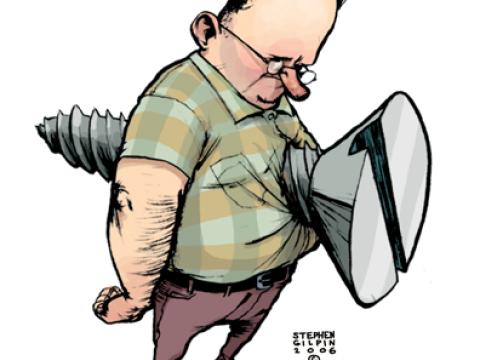