A Czech worker argues with a Soviet Soldier

A letter by French Marxist Andre Granou on the escalating repression of Czechoslovak intelectuals and workers in the after math of the Soviet crushing of the Prague Spring.

DURING THE LAST SEVERAL MONTHS, the police repression in Czechoslovakia has become both more diversified and more brutal. At the time of the last Warsaw Pact meeting, which was held in Prague, Brezhnev and Kosygin severely criticized Husak's policy of normalization and demanded new repressive measures. Clearly, the Soviet rulers do not intend to be put off with measures that seem to them insufficient and, above all, purely formal. As in the worst days of Stalinism, they want "enemies" to be attacked by name, "plots" to be unmasked, so that the suppression of these plots and enemies can serve to warn anyone tempted to protect or imitate the advocates of any new "Prague Spring."

It is for this reason that they have imprisoned former members of the Central Committee (such as Milan Hiibl, Jaroslav Sabata, Alfred Cerny), journalists (such as Jiri Hochman, Karel Kyncl), and dozens of other Communist militants[1] accused of having fomented in 1968 the "counterrevolution" which was in fact a struggle against bureaucracy on the basis of workers' councils. While Dubcek is accused only of feebleness and indecision, the revolutionary left in Czechoslovakia is now the internal enemy against whom every possible step must be taken.

The first step is to stop any infection, to destroy the revolutionary ideas that were able, in the Spring of 1968, to trouble the "bureaucratized" consciousness of the people. Teachers, public employees, factory managers, scientists and technicians ... must fill in new dossiers on themselves. But while last year these dossiers asked only about their own political opinions and activities—especially during the August 1968 invasion—this year there are questions about wives, children and parents, to allow for crosschecking. Thus children pay for the sins of their parents; the sons and daughters of expelled Communists are already forbidden to attend high schools and universities... until such time as informing becomes a "socialist duty"

At the same time, all publishers, newspapers, radio and TV stations must turn in lists of all their employees and associates, complete with political profiles and histories on each, covering their activities in 1968 and since. Any association between the media and all Communists either expelled in the successive waves of purges from 1969 to 1971 or who left the Party "voluntarily" has been ordered to cease immediately. What the Husak regime is concerned about is not so much whether the intellectuals of the Prague Spring are still publishing their views—that is practically impossible—as it is to find out whether they are finding work as translators. Barred from employment either in their usual fields or as manual or clerical workers, a great many of these intellectuals have been able to support themselves only by working as translators.

UNDER PRESSURE FROM THE KREMLIN, the ruling circles in Prague have essentially decided to finish off the intelligentsia, which they see as the principal figures in the anti-bureaucratic struggle for workers' councils. By depriving them and their families of their livelihood, by depriving their children of the right to an education, the regime forces them either into beggary (which is illegal), or degradation (by becoming the most zealous performers in their office), or into exile. In one blow, three generations of socialist culture are outlawed, not only to suppress what there now is of creativity and expression in the country, but also to bar the way to those who would like to insure the succession of these ideas. Like the Hapsburgs 400 years ago, like every occupying power, the guardians of Communist orthodoxy in Prague and Moscow have undertaken the methodical elimination of the indigenous culture of the Czechs and Slovaks, hoping in this way to rob the workers of an essential weapon in their struggle.[2]

THE BASIC AIM OF THE REPRESSION is still to maintain control of a populace, and above all of a working class, that has never been resigned to the occupation and whose apparent passivity cannot totally obscure a history of four centuries of resistance against successive occupiers. For this reason Husak has decided to purge the trade unions well before the Congress called for the end of May. This Congress, presided over by Karel Hoffman, Novotny's Minister of Culture, collaborator with the invasion and now a member of the presidium of the Central Committee, was forced to repudiate those orientations worked out at the last congress, held in already Soviet-occupied Prague in the Spring of 1969.

That Congress condemned the subordination of the unions to the Party, claiming instead the right to express and defend the views of the workers whose organizations they are. From this perspective, it also supported the legitimation of the workers' councils and debated the necessity of their national unification in a "central council of workers' councils," a true legislative power of the working class. At this point President Svoboda intervened in person to cut off a debate in which the two political lines were irreconcilable, telling the Congress that he did not know how an association of these factory councils could constitute a new political power! This was on March 28, 1969. At the beginning of April, the elimination of Dubcek was completed and the development of the mass movement halted in its tracks. Normalization a la russe was beginning.

According to still-incomplete figures, about 65,000 trade union officers, democratically elected in 1968 and 1969, were thrown out bureaucratically and replaced by others named directly by the regime. Some of those dismissed in this fashion found themselves in the same boat as the progressive intellectuals, barred from jobs and from any chance of finding them. Again, it was essential to prevent young or future workers from coming to the aid of the fight for the socialism of workers' councils. In lieu of gaining the confidence and support of the working class, Husak hopes that his new trade union bureaucracy will "guarantee discipline and order in the shops," so that the resumption of production, so needed by the Soviet rulers, can get under way, relieving the Russians of the necessity of continuing the "aid" in Czechoslovakia that interferes with their projects elsewhere, on the Chinese frontier. But the passivity of the workers, so decried in the West, can be thrown off remarkably quickly. Does this mean that the working class and the people as a whole, like the intellectuals, must be outlawed?

THE CONVERGENCE OF THE REPRESSION in Czechoslovakia on progressive intellectuals and workers' representatives is no accident. It underlines once again the determination of the Soviet rulers to stamp out the entire left opposition whose development poses a mortal threat to the power of the bureaucracy. This is one of the lessons of the Czech experience. Given that, the spread of the repression in Prague is of great concern beyond the borders of the country; it involves the entire communist and revolutionary movement. If, on the one hand, it points up again that a break with the Soviet bureaucracy is a necessary condition for the rebirth and growth of a left opposition, in East and West alike, at the same time it shows that solidarity with the workers and intellectuals of Czechoslovakia is also a necessary condition. Completely aside from the fight against political repression, the very conception of socialism itself is at stake in Prague.

The European left, however, has been noticeably stingy in granting this solidarity. The fact that blows fell hardest on the intellectuals, and that the workers remained "passive," became an alibi for the passivity of the left in Western Europe, which has scarcely understood the concrete reality in Czechoslovakia and the conditions under which the struggle is waged. The ultra-left groups, when they didn't ignore the question altogether, used it only to show that they were more antiStalinist than the others, without giving a damn about the real interests of the Czech and Slovak peoples. Nothing has been done beyond a few purely symbolic actions, a manifesto here, a demonstration at the embassy there. And this holds not only for France but for the other Western European countries and the United States as well.

Socialism under workers' councils or Stalinist-Brezhnevist bureaucracy—that is the choice with which we are all faced. Confronted with the struggle that has been waged in Prague for the last four years, the left in the West cannot stay indifferent or silent. Their struggle is our struggle. If we fail at this juncture, our failure will affect not only our comrades in Czechoslovakia but the future of the socialist revolution in the West.

Translated from the French by Ian McMahan.

Socialism under workers' councils or Stalinist-Brezhnevist bureaucracy—that is the choice with which we are all faced. 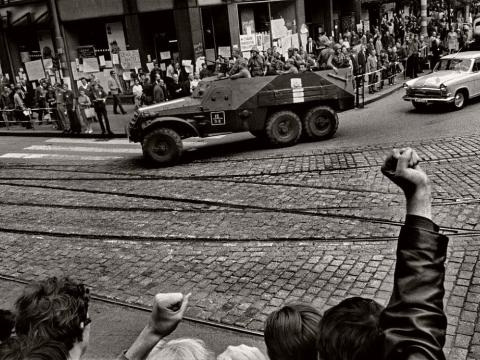 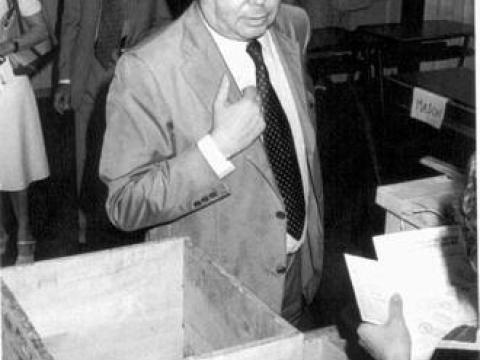 Socialism With a Human Face or With Goose Pimples? - Karel Tynsky

An account by a Czech journalist of the trials convenved to punish those who took part in the protests of the Prague Spring. 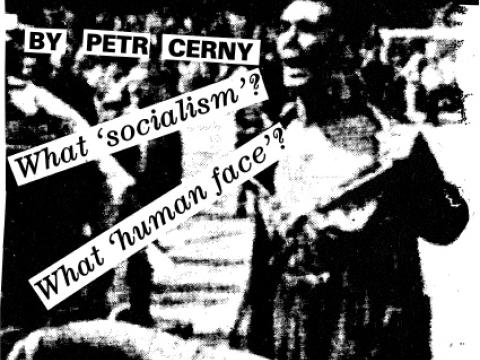 Excellent pamphlet from Solidarity with a critique of the myth of the Prague Spring. It recounts the…