The most depressing thing this week has been the level of bile spewed about people at Dale Farm, now set for an eviction on September 10th. Unlike most, I've actually been there.

A few years back I travelled down to Basildon in Essex. I got in a taxi and asked to be taken to Dale Farm on Cray's Hill. The court case was raging at the time, tensions were high in the local community and when we got to the end of the track up to the site, I was told "this is as far as I go."

I don't know what I was expecting as I walked up to the spit of land which has for many years been the focal point for some of the national presses' worst bigotry and hatred. I'd only seen photos taken from afar, blurry shots by snappers eager to show the squalid conditions Those People were living in.

And in fairness, when I got there a lot of rubbish was lying around, in piles of black bin bags or drifting around the fences and hedgerows. Basildon Council doesn't do rubbish clearing on illegal sites. But the actual plots? They ranged from the spotless to the scruffy - pretty much as you'd expect on any estate in Britain. There were a fair few dogs around as well, usually off the leash, but they were friendly and looked well-fed. And of course there were a lot of caravans.

But what might be surprising to the critics is the number of actual houses. Fully plumbed-in, connected homes built on land they paid for and set up in exactly the manner which has been touted as the "solution" to the Traveller "problem" since way back when.

Specifically they've been doing this since 1994, when the Criminal Justice Act starting stripping away the onus on councils to provide caravan sites (there's a shortage of 25,000 at the moment) and Michael Howard said "buy land and we'll let you settle it." What has in effect happened in this isolated corner of East Anglia is that 1,000 people who, according to conventional wisdom, are a problem because they move around ... are no longer moving around, having taken a Tory at his word.

Which makes the zeal with which an eviction of half the site is being pursued somewhat odd. If Travellers are all basically barely-contained personifications of anti-social behaviour would it not make sense to stop forcing them to sally forth across Britain's roadsides and fields? Would it not actively make sense to do what was originally promised and let them live in peace on land they own, stripping away not their homes, but the planning system which militates against Traveller applications?

Of course that's a logic which only applies if you believe the Dale Farm residents to form, essentially, a wretched hive of scum and villainy worthy of Star Wars. A logic which is easy to use if your closest experience of a people is your mate Robin whose cousin's best mate's sister once had a shitty tarmaccing job done by a couple of guys with a suspiciously Irish-sounding accent.

My own experience is somewhat different - and not just because I've actually done my homework and know that the presence of Europe's largest Traveller site has not turned Basildon into ground zero for criminal activity (the town does better than average on almost every count).

When I was there, shortly before I was given a cup of tea and invited to look at a ten-year-old's card to her auntie ("she'll be our accountant one day," her mum said proudly) I took in the following impression:

There were a few wideboys on site with a couple of vans which could quite easily hold some hooky gear - or just items from the furniture trade which has been a major source of income for the Sheridans (the main clan on site) for over 30 years.

And there's a lot of decent enough people of all ages trying to get on with life in the face of massive prejudice and poor education. They're mostly not criminal masterminds even if they're a bit rough around the edges, and there was a lot of god-fearing catholicism if the iconography I saw was anything to go by. This coming generation, including that ten-year-old girl, will be the first to be consistently literate as they had an uninterrupted schooling - progress which throwing them back on the roads will help destroy.

None of them deserve what's going to happen on the [Edit: 19th, according to the Echo], which will be a bigger and even more vicious version of this:

Yeah, a welcome break from all of the recent bullshit

Hopes have been raised that Dale Farm, the largest traveller site in the UK, will gain a reprieve from eviction in the New Year.
Image 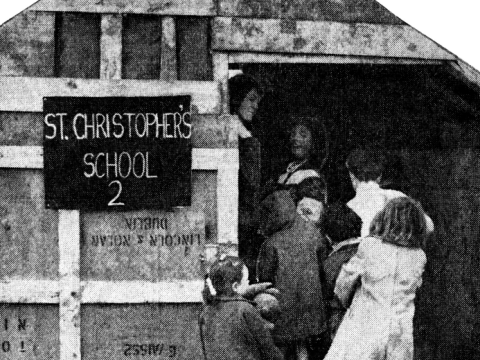