Ukrainians, Russians and Europeans were on the streets today protesting against the Putin regime’s attack on Ukraine.

The anti-war demonstrations today are the only shaft of light I can see in a dark sky overshadowed by the danger of war, with 6000 Russian troops reportedly on Ukrainian territory in Crimea, some of them surrounding Ukrainian bases.

Voices on the Russian radical left were unequivocal. “It is necessary to call a spade a spade: what’s happening in Crimea these days is a classic act of imperialist intervention on the part of the Russian state”, said the Open Left group in a statement published in English here.

“Maidan has opened the sluices of activity of the far-right thugs – and at the same time has spurred to political life great masses of people, who perhaps for the first time perceive that they themselves are capable of determining their fate. This range of possibilities has the potential to resolve itself both into progressive social changes, and into the victory of extreme reaction. But the final decision must, without doubt, be left to the people of Ukraine themselves”, Open Left wrote.

Large numbers joined demonstrations against the war not only in Kyiv but in all the large Russian-speaking cities in the east. Ukrainska Pravda reported a demonstration of 5-10,000 people against Putin’s aggression in Nikolaev, a predominantly Russian-speaking city in southern Ukraine. The report said that agricultural and public sector workers, students and the intelligentsia were all at the march.

In Kyiv, the radical left called for working-class solidarity against Putin’s militarism. “There’s no point in waiting for ‘rescue’ from Nato”, said a statement by the Autonomous Workers Union, published in English here. “The war can be averted only if proletarians of all countries, first and foremost Ukrainian and Russian, together make a stand against the criminal regime of Putin.”

Messages from activists in social movements in eastern Ukraine painted a grim picture. My friend G., a trade union activist based in Dniprodzerzhinsk, emailed to say: “Most ordinary people are cautious or hostile to the [Ukrainian] nationalists, and so Euromaidan got very meagre support here. There have been many rallies here against the accession to power [in Ukraine] of ‘fascists’ and ‘nationalists’.

“But after Russia sent its forces into Crimea and threatened war – both sides appeared ready temporarily to drop their differences and defend Ukraine. The bottom line is that this conflict is starting to unite people. Those who openly support Russian intervention are not visible right now.

“On the other hand there is the threat of the right radicals coming to power. Yesterday many oligarchs were appointed to the governerships of eastern regions. [Among a string of new governors appointed, Igor Kolomoisky, the oil-to-telecoms billionaire was made governor of Dnipropetrovsk region and Sergei Taruta, the steel magnate, governor of Donetsk region.] And earlier on there were rumours that they are financing Euromaidan, supporting [the right wing populist party] Svoboda, for example. And now we are getting confirmation of that. But ordinary people, workers, have little to say about that.”

A radical left activist, D. from Dnipropetrovsk, emailed in a more pessimistic vein, quoting Pushkin: “The people were silent.” [The famous last line of the poem Boris Godunov – GL.] “That applies to workers whether young or old”, he said. The events around the Maidan demonstrations had a polarising effect. “Wide layers were seized by nationalism, Ukrainian or Russian. [...] That’s a catastrophe that could be compared to August 1914 [the outbreak of the first world war].

“Among socialists and anarchists there is a very pessimistic mood. Twenty five years of socialist propaganda from a wide range of left groups and ideas seems to have gone nowhere, disappeared like a puff of smoke. Of course, we didn’t have such great achievements before (in contrast to 1914). But what’s happening now gives the impression that all these decades of socialist work were for nothing, have produced no results.”

Despite his gloomy prognosis, D. added that, in respect of a possible incursion by the Russian army, “the indignation is overwhelming. In the last three or four days, since the beginning of the military activity in Crimea, I haven’t heard any other reaction.”

In London, home to the largest community of Russian migrants in western Europe, an anti-war demonstration at the Russian embassy was followed by action at Trafalgar Square, where Boris Johnson was hosting a festival to mark Maslenitsa (the Russian equivalent of Shrove Tuesday). A banner saying “No invasions! Stop repressions!” was hung over the balcony of the square.

The demo organisers were aiming at the event’s Russian corporate sponsors – as they put it, “the largest oil polluter, Rosneft; the union busters Aeroflot; the hate mongering Russian state media and Kazmunaigaz, which was responsible for massacring Kazakh oil workers”.

Against what is Vladimir Putin directing this war? The story being told in the western media is that he seeks to undermine Ukraine’s new government – nationalist and right wing, with a neoliberal economist prime minister, and portfolios held mainly by members of Batkivshchina (Yulia Timoshenko’s right wing liberal party) and the extreme nationalist populists of Svoboda.

I don’t think this coalition, thrown together in the crisis that followed Yanukovich’s departure, is his main target. Rather, it is the mass movement that accompanied the Maidan protests, which brought ordinary Ukrainians into political and social action on a level unprecedented since the break-up of the Soviet Union. Above all, Putin fears the spread of protest, and popular participation, into Russia.

Last week I wrote (here) that “Russian support for separatism in eastern Ukraine, or even, in extremis, civil war” were not the most likely prospects. I was wrong. And now, although military action beyond Crimea is unlikely – or perhaps I mean “unthinkable” because the consequences would be so disastrous – it has to be acknowledged that Putin’s operation in Crimea could spin out of control.

I agree with the statement by Open Left in Russia, that the Crimean operation can not solve Putin’s basic problems. His regime is not built on strong foundations. Russia is slipping back into recession, its economy able to maintain its footing only thanks to high international oil prices.

In a discussion with British leftists about Ukraine yesterday, the opinion was voiced that “anti fascism”, meaning opposition to the new government in Ukraine, is the priority, and that it would be “no bad thing” if the Putin regime put arms in the hands of “anti fascist militia”.

But there are no “anti fascist militia”. The European left should not use this crisis to indulge its own fantasies.Yes, we in Europe should do everything we can to help Ukrainian socialists and trade union organisations who have come under attack from right-wing nationalists and fascists. I argued for that in an article last week. But there is no question about where the greatest threat is coming from to working-class solidarity, to social movements, and to the attempts of people in Ukraine and Russia to shape their own future ... it comes from Putin’s militarism.

Let’s support the anti-war movement and independent working-class and social movements in Ukraine and Russia however we can. GL.

The photo shows a big demo in Nikolaev. The banner in front on the right, written in Russian, says "Putin, hands off Ukraine".

■ From People & Nature.
■ Read “The end of Yanukovich is a beginning”, posted last week.

“But after Russia sent its forces into Crimea and threatened war – both sides appeared ready temporarily to drop their differences and defend Ukraine. The bottom line is that this conflict is starting to unite people."

So, all of a suden it's ok to pledge alliance with nazis, right?

It seems Russia already had about 25.000 troops as part of an agreement with the Ukrainian authorities taking in account a Russian naval base in Sevastopol:

Not ignoring that this is obviously a consequence of Russia's long rolling imperialist tendencies (following the neo-colonialist lines of many western european states, the USA, etc.), an agreement between states is something to be considered before trumpeting that troops were sent, when troops were already there...

I think I might have an idea of what's the poster stance on Nuland's, Ashton's, Mcain's, etc. open support for the nazis, currently in power in Ukraine...:

A classic act of imperialist intervention

Statement against both Ukrainian and Russian nationalisms by Tridni Valka (Class War). 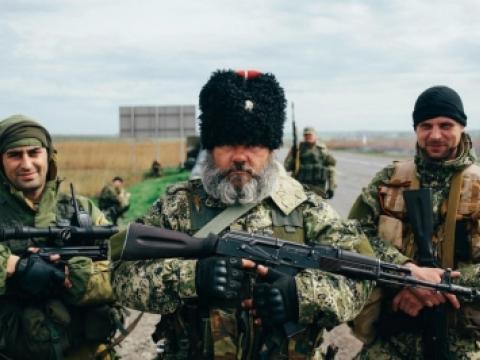 Ukraine: nothing to expect from Europe or Russia

As we promised already a few weeks ago, here we finally publish the English translation of the OCL text, originally available in French on http://oclibertaire.free.fr/spip.php?article1506. Very interesting text especially because of its materialist and non-idealist method that analyzes the movement, its process and its dynamics, only after it tackles its weaknesses, its lacks, the illusions of its protagonists,… 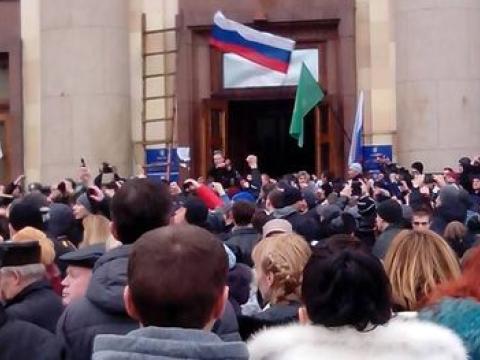