A wave of unprecedented strikes by disgruntled workers has swept Egypt this week.

The atmosphere at the mammoth Factory No 1 belonging to the Misr Shebin Al-Kom Spinning and Weaving Company (SSWC) in the Delta is glum. The din of roaring machines at the 47-year-old factory is no more, after someone flicked the shut down button last week for the first time in nearly half a century. Ahmed Gaber, who has been a loyal employee at the factory since its inauguration in 1960 by President Gamal Abdel-Nasser, has been sleeping for five days next to the machine he operated since he was hired.

Gaber has decided to join 4,200 co-workers who went on strike on 1 February to protest against the company's refusal to pay them bonuses for the past seven months. They demand the payment before the company changes ownership and becomes the property of the Indian company Indo Rama, which will own the company for the coming 25 years at a cost of LE125 million. Another demand is that they receive the 45- day bonus promised by the Minister of Investment Mahmoud Mohieddin after a strike last December at Al-Mahallah Spinning and Weaving Company.

Although workers feel the sale to the Indian investor short-changed the government because company assets are estimated at LE3 billion, workers welcome the move to privatise since it is a world trend. "We welcome the new owner, but we must receive our financial rights," they demanded.

So far, the only casualties have been three workers who were transferred to hospital after spending five nights in the chilling cold on company premises. But the urge to go on strike among factory workers spread to Kafr Al-Dawwar Spinning and Weaving Company on Sunday, when 11,000 workers went on strike to protest against their company's failure to pay the 45-day bonus promised by Mohieddin. They also demanded increased incentives, improved healthcare, fair labour elections and the sacking of the chairman of the company.

Meanwhile in Cairo, workers at the Cairo Poultry Company went on a two- day strike before they were promised their due bonuses. Also, workers at the Mansoura-Spain company started an open-ended hunger strike on Saturday to protest against their company's failure to pay salaries and its ill-treatment of employees. Workers claim management has threatened anyone who makes a demand to get paid.

Back in Shebin Al-Kom, the head of the Egyptian Workers' Union Hussein Megawer agreed with SSWC Chairman Mohsen El-Gilany and head of the Spinning and Weaving Syndicate Said El-Gohary on Saturday night to issue a LE5.8 million cheque to pay employees their dues after Indo Rama takes over. But workers are highly suspicious of the move, telling Al-Ahram Weekly that all these meetings are "a ploy to deceive workers" until they hand the company over to the Indian investor.

According to the sale contract, workers are entitled to 12 per cent of the company's shares before it is sold to the Indian investor. However, they have not received the shares documents until now. Workers protest that most of them have been at the factory for more than 35 years, and it is their labour that has built it up. They demand their percentage of the company shares.

When strikers refused to end their protest, El-Gohary accused them of being "terrorists who want to sabotage the company". In addition, Megawer accused "interest groups within worker ranks" of conspiring to destroy the company. In response, workers retorted that they did not sabotage the factories since it is the source of their livelihood. "We will keep the factory intact until we get our rights," one worker told the Weekly, "and there are no political motivations behind our strike."

Humiliating and difficult work conditions, bad treatment from company seniors as well as meagre wages prompted workers to vent their increasing anger. "I have spent 14 years with the company, and I only make LE400 a month," protested Abdel-Hamid Saleh. "Rent costs LE300, so how can I feed my family?" His colleagues also had angry stories to tell, saying that new employees sign a document relinquishing their right to a raise, time off and any other benefit. Workers are also prohibited from playing sports at the company's club, although a monthly subscription is deducted from their salaries to support it, and are not allowed to pray at the company's new mosque.

They blame the members of their syndicate committee for not demanding their rights. "Committee members have conspired with senior company officials," one worker claimed. "They refused to join us and are now sitting at cafés drinking coffee." 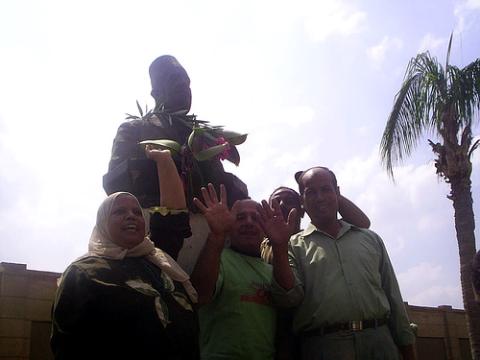 "For the second time in less than a year, in the final week of September the 24,000 workers of the Misr Spinning and Weaving Company in Mahalla…
Image

An update from an Egypt-based libcom poster on the state repression of the workers movements in Mahalla on the Nile Delta.
Image