What an indictment against Society! Impure and poisonous, indeed, must have been the soil that nurtured such a plant.

The champions of the capitalistic system assert that the majority will ever have to live in poverty and misery, and that millions of backs are to remain forever bent, to sustain the magnificent structure called civilization.

Were we all to toil to produce the mere necessities of life-they say-who would foster art, poetry, and literature? Surely, there must be a select few. By their culture and aestheticism by their refinement and beauty, they illuminate and elevate those predestined to a life of darkness and despair.

Such is the philosophy of capitalism. But even this philosophy, absurd as it is, will fail to justify the life of Russell Sage. It would search in vain for even the faintest reflex of himself, or of his tremendous wealth, in the lives of those that dwell in the abyss.

Russell Sage! Accumulation, with him, was not a means, but rather the sole aim of life. The notion that the social mission of wealth is philanthropy and charity was brutally caricatured by the personality of this man. Not even his own life derived any benefit from his riches, let alone the lives of others. Indeed, he serves as the most striking proof of our social insanity, which suffers thousands to starve, that a, few calculating human machines may pile dividends upon dividends.

THE KINGDOM OF PEACE

By Milo A. Townsend

Within, are the Fountains of Peace,
Within, are the riches of soul-
The riches alone that can last,
While billows of ocean shall roll.
The riches which dwell in the mind
We may take wherever we go-
While money which men seek and hoard,
Proves often the soul's overthrow.
Though millions a man may possess,
Very poor he still may remain,
Poor in all that is noble and great-
Rich only in gewgaws and gain.
Within is the Kingdom of Peace,
Which only the true soul can know-
This kingdom enthroned in "the light,"
Truth alone can ever bestow.
Without are the deserts of Care,
Where Mammon sits brooding and grim-
Then seek for the Kingdom of Peace-
The world's lights are fleeting and dim.

The religion and philosophy of the enslaved lean towards fatalism. Self-humiliation is a source of satisfaction to those that see the cause of their misery in destiny or in some supreme power, rather than in their own cowardice and weakness.

We throw our responsibilities into the refuse of metaphysics, which are supposed to hide somewhere beyond the drawn draperies of this world.

Fatalism is the most convenient excuse for all those that are unable or unwilling to strive for freedom.

"But, surely, fatalism is not to be found here. Is it not rather an Oriental growth?"

"You are mistaken, ladies and gentlemen. We are much more fatalistic than the East. There, Allah is Providence; here, conditions are Almighty."

We continually prate about the inexorability of conditions; we assert that man is their product. What does he want? Liberty? Independence? How stupid! He is not a free agent, and therefore he must submit to conditions. But as the latter are notorious for their caprice, it often happens that they transform political mountebanks into presidents of the Republic, while genius and talent go begging at the doors.

This barbaric belief in the superiority of conditions and the helplessness of the individual is our greatest curse. It robs men of hope and strength; it deprives them of all power to hate and love. It makes submissive slaves of them.

Man must cease to look upon himself as a mere tool; he must break the fetters that leave him no space for initiative; thus he will become the creator, instead of the created.

Our highest aim should be to master conditions, rather than remain subservient to them.

Christ is the type of martyrs that burden and enslave, rather than liberate.

The gospel teaches that he suffered for humanity and that he died on the cross to save men from sin. Mankind has paid dearly for it since. In the name of the one that was crucified all have to do penance. His disciples carried his agony all over the world, preaching hatred of joy. How dared life's joy to raise its head! Has he not shed tears of blood ? Has he not called, in despair, "My God, my God, why hast thou forsaken me!"?

This Saviour disproves the idea that man can be redeemed through external forces. From the proclaimed redemption he has inherited only the duty to renounce and to chastise himself. If he dares to refuse participation in the martyrdom of the Nazarene, he is condemned as vicious, impure, and immoral.

There is no redemption; there is only sanctified selfabnegation, self-humiliation.

Only saints and puritans find satisfaction in ashes and sackcloth.

Was Christ really confident that his sacrifice would be appreciated? What if the sinners were proud, proud of having sinned? What if they disdained to listen to him who persisted in bearing the cross for all? What if they proclaimed their courage to be all-sufficient unto themselves?

A full and strong personality may succumb to its own rich and insatiable nature, to its inability to bow and submit; it never can break or crumble because of forces outside itself.

The attempt on the part of the Russian Government to appear modern by checking the Revolution through parliamentary methods has proved a dismal failure.

Edged in on all sides, her industrial and business life crippled, her financial heart deeply wounded, she deemed it diplomatic to throw a bone to the Revolution. This sumptuous meal might so elate the people, that they would cease to rebel.

There are the Liberals and the Constitutional Democrats, for instance, who really desire nothing more for Russia than a government according to the political pattern of Western Europe. A few concessions might enlist their co-operation, which would tend to isolate the Revolution and stamp it as a crime against the Government, so eager and ready to consider all modern political demands.

The intention, however, was to continue her despotic régime,--the Duma could prate to its heart's content, so long as it gave the monster on the Russian throne a chance to recuperate from the horrors of the barricades.

If the Duma could be used as a shield, to check the anger and hatred of the people, it will have served its purpose.

This speculation of the Russian autocracy was based upon the experience of other Governments with revolutions. The West-European revolutionary movement of 1848 failed miserably: then, too, the people were promised political rights; popular representation was the arena for acrobatic exercises; while the constituents searched for worthy men to represent the nation, the reactionaries prepared a counter revolution, which culminated in the forcible expulsion of the representatives of the people from the halls of Parliament. The autocracy hoped for a similar development of events. It failed to realize that economic and social motives of revolutions have grown more powerful within the last decades than the political.

The Russian revolution, unlike the revolution of '48, is not to be checked with a constitution on paper. It is much more concerned with the economic and social, rather than the political reconstruction of Russia. It is because of this that the Duma failed to enthuse the great majority of the revolutionists. The latter have grasped the truth that the Parliament is a hindrance, rather than an incentive, to the organization of society.

The battle between the old and the new social powers can not be fought in the Chamber of Deputies. The question is no longer, "Will the Conservatives or the Democrats triumph?" but rather, "Is the possessing class to continue to exploit society for its own benefit?" It would seem that the people have reached that stage of development which must end in the overthrow of the system of tyranny and robbery.

It is this spirit which carried the Duma far beyond the boundary line of their original intentions.

Had the Government to deal with the representatives only, a compromise might have been brought about. But beyond the Duma-by-the Grace-of-the-Tsar rose the revolutionary waves, the peasant, and the workingman. These care little for political theories: the one demands the land, the other the product of his labor-Socialism or Anarchist communism. They have no desire to patch up the sores on the social body with petty political court plaster, as was the ambition of Witte arid his colleagues. Their aim is the expropriation of the wealth stolen from them.

The Duma was compelled to flirt with the revolution. As the latter's child it could not very well aid Tsarism in its barbaric overthrow of the insurrection. Its popular leanings aroused the ire of the decaying autocracy and thus the Duma was abolished.

It was not a very clever move. It will only hasten the downfall of Tsarism with all its horrors.

A HERO OF THE RUSSIAN REVOLUTION.

As to those who fought in the insurgent bands and those who were most compromised as members of the strike committee, their lives were saved by a courageous engine-driver, Ukhtomsky. At the last moment, when the insurrection was crushed and it seemed already impossible to pierce the ring of troops which held all the outlet from Moscow, Ukhtomsky offered to take the most compromised insurgents and strikers on a train and to break through the iron ring. This he did most successfully under a hail of bullets from the machine guns. He was arrested later on quite accidentally, having come to a railway station while a Semenovsk detachment was there. The officer looked through the portraits supplied to the troops by the spies, and at once recognized him. "You are the engine-driver Ukhtomsky," said he; "you will be shot." "So I thought," calmly replied the prisoner, and before dying he narrated the following: "When all roads leading out of Moscow were occupied by the troops, I undertook to take the insurgents and our strike committee men in a train through your ring. You had already placed machine guns in the orchards-menacing the line. In this dangerous--quite open-space on the railway curve I developed a speed of sixty miles per hour. I myself drove the engine. The pressure in the boiler I brought up to fifteen atmospheres--the very limit for the bolier. The danger was not from machine guns, but from the boiler bursting. I went not only with open draught doors, but also with an accelerated speed of the syphon. And as we ran at this speed along the curve the machine guns began to rattle. Still, the real danger lay in our speed, in the possibility of being thrown off the metals down the embankment. However, I regulated the steam with an experienced hand, feeling that I had on my responsibility the lives of those whom you tracked. You wounded six men, but nobody was killed. All are now safe and far away. You will not have them."

He quietly spoke before his death to the soldiers and won their sympathies. He stood upright and calmly looked on them. When the first volley was fired the three workers with whom he was shot fell dead, but not one single bullet had been fired at Ukhtomsky. None of the soldiers would kill him. The officer ordered a second volley to be fired--and then he fell on the snow with a terrible expression of agony in his eyes. The captain discharged a revolver at his head. 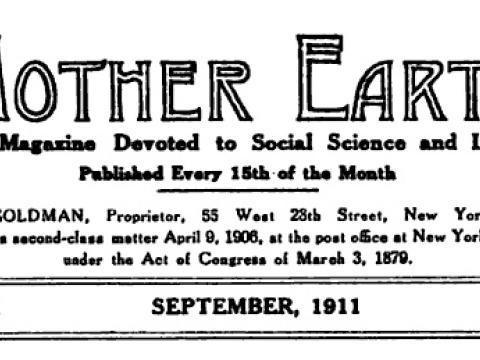 Issue of Mother Earth from January 1912. Articles by "MB" are written by Max Baginski.