A short history of a strike and subsequent lockout by printers in the Wapping area of London, which began in the winter of 1986 and ended just over a year later. The strike marked one of the last major confrontations of the 1980s between workers and employers in the UK.

The strike of newspaper workers that began on January 24, 1986, marked the beginning of a bitter year long dispute between the print workers of Wapping, a borough of East London, and their employers, the publishing company News International. The dispute was one of the last major strikes of the 1980s, coming about less than a year after the end of the great miner's strike and at a time when the Conservative Party's anti-union legislation was making its mark upon organised labour.

The strike had been preceded by many years of drawn out negotiations between the unions and News International, which was, and still is, part of media mogul Rupert Murdoch's News Corporation. News Corporation publishes, among others, The Times, The Sunday Times, The Sun and the News of the World.

News International had planned to move production from Fleet Street to a new plant at Wapping, and had been trying to procure from the unions assurances that they considered would keep the new plant running successfully. These included a no-strike clause, an end to the closed shop, flexible working and the adoption of new technologies that would almost certainly have resulted in heavy job losses. The prospect of these conditions angered the workers, and, represented by the National Graphical Association (NGA) and the Society of Graphical and Allied Trades (SOGAT) unions, they called a strike for January 24.

All those involved in the strike were fired by the company almost immediately after it began, members of the Electrical, Electronic, Telecommunications and Plumbers Union (EETPU) were drafted in to keep the presses running, and production was transferred to the new Wapping plant. The EEPTU had a long history of provided scabs during strikes, testimony to the free market ideology and red-baiting rhetoric espoused by one of its most prominent leaders, Frank Chapple, and his protégé Eric Hammond, who was the union's leader during the Wapping strike. It became apparent that the swift use of the EETPU had been previously planned by management at News International, leading many to believe that the company had been seeking to instigate a strike in an attempt to bring an end to negotiations with the unions once and for all.

Mass demonstrations, often consisting of thousands of print workers, supporters and local residents, were organised by the unions in support of the strikers and regularly took place in Wellclose Square, opposite the Wapping plant. A massive police operation was undertaken to prevent any disruption to production, and the plant became known as "Fortress Wapping", owing to the excessive security measures in place. Scabs from the EEPTU were driven in by buses from secret pick-up areas, and drivers were often able to completely avoid picket lines. A boycott of the newspapers printed by News International was also declared by the unions. The company counter-acted this by using the vehemently anti-union road haulage company TNT to keep supplies of papers on the move around the country, instead of using the railways where disruption from traditionally militant railwaymen sympathetic to the printers would have been almost unavoidable.

The strike took several violent turns, and clashes between workers and the police were numerous. The first major confrontation occurred on February 15 when riot police attempted to break up a demonstration of 5000 people. Eight police officers were injured as well as many workers, 58 others were arrested. Local residents were seen by the police as being sympathetic to the strikers, and the borough usually had over a hundred police officers on duty at any one time, on one occasion massing to a number of 1800. Local residents were often prevented from walking down their own streets and entering their houses, and in many instances disturbances with strikers were the direct result of careless stupidity on the part of the police.

The willingness of the printers to carry on the strike remained solid throughout, although some journalists from the National Union of Journalists (NUJ) were quite prepared to cross picket lines. Disruption at the Wapping plant was seriously limited, and owing to the presence of scabs from the EEPTU, not one day of production was lost and newspapers were printed as normal for each day of the strike. Much vocal support was offered by other unions although little practical aid was provided, leaving the workers mostly responsible for the day to day running of the strike.

The policing of the strike attracted widespread criticism from many groups who accused the police of having fuelled confrontations with the strikers and local residents. Accusations of attacks on journalists and camera crews who were reporting the strike also surfaced, and the BBC lodged a complaint with the police, reporting that their employees had been assaulted by police officers and their equipment damaged while they had been filming a confrontation between strikers and police. A particular occasion of police heavy-handedness was widely reported after a demonstration on January 24, 1987, when policemen were filmed attacking strikers, legal observers, journalists and first aid workers, damaging vehicles and illegally, and seemingly randomly, raiding houses in the area.

After over a year of walking the picket lines and surviving on minimal strike pay, the sacked printers were growing desperate. Union funds had been completely exhausted, and with the lack of help from other unions, the strike seemed impossible to be able to carry on. It came to an end on February 5, 1987, with the printers accepting a weak redundancy package. News International, the EEPTU and the police were heavily criticised for their actions during the strike, and the power of the print unions was forever broken. Production was moved fully to the Wapping plant, where new technology allowed print to be composed electronically and to be submitted directly by journalists, negating the need for thousands of printers to be employed in the plants. The implementation of these changes led to thousands of forced redundancies in the printing industry.

Like many disputes common of the time, the strike ended with irreversible damage done to the unions, and many hundreds of workers facing unemployment. The last major outbreak of militancy of the workers' movement of the 1980s had, just as the miners had bitterly experienced, ended in failure. 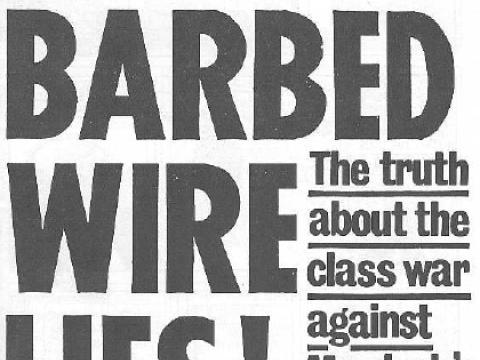 A contemporary spoof of The Sun newspaper containing a "Tintin" cartoon about the Wapping printers dispute of 1986. 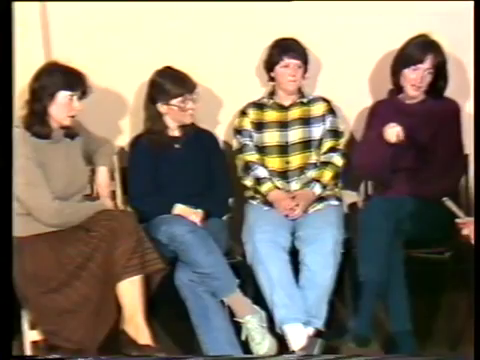 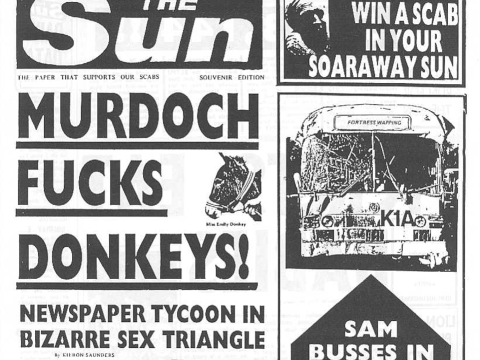 The Sun - spoof newspaper from the Wapping strike, 1986 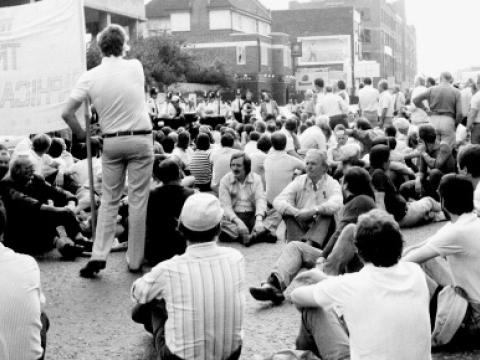