Overview of some publications and individuals active in Autonomia in Italy in the 1960s and 1970s.

According to the magistrates conducting the inquest against those who were arrested on 7 April, the political group Potere Operaio (Worker's Power), which emerged in 1969 and disbanded in 1974, was the point of departure for all the developments during the past five years, from Organized Autonomy to the Red Brigades. Under this indictment fall the most diverse people, many of whom no longer have anything to do with the organizations that are prosecuted today. It is in this way that the Italian State tries to “facilitate” its repressive operation: any kind of involvement with Potere Operaio is enough to put someone under indictment.

This brief chronology, compiled for us by Sergio Bologna, seeks to demonstrate that the area of Autonomy, both in theoretical terms and as a militant practice, contains profoundly different tendencies distinguished by their choice of thematics, researches, and theoretical elaborations.

1962
During the metal workers’ contractual struggles, the editorial staff publishes a series of pamphlets (News from Quaderni Rossi), in addition to the review.

1963
The group’s first political crisis occurs: a majority of the editors wants to organize local “workers’ editorial staffs” and factory newspapers. Potere Operaio (Milan, 1 May 1963), Potere Operaio di Porto Marghera (Padua, May 1963), Gatto Selvaggio (Wildcat) (Turin, June 1963), Classe Operaia (Working Class) (Genoa, June 1963) appear contemporaneously. These local newspapers try to unite themselves under the heading Cronache Operaie (Labor News), and in this operation there is a break with Panzieri, Rieser and others.

1964
In January, the remainder of the editorial staff founds Classe Operaia with numerous local editors: Tronti, Asor Rosa, Di Leo, and De Caro are in Rome; Negri, Bianchini, Ferrari Bravo, and Cacciari in Padua; Casparotto, Sergio Bologna, Forni, Brunatto, and Gobbini in Milan; Alquati and Gobbi in Turin; and Arrighetti, Greppi, Berti, and Francovich in Florence.

1968
Negri, Asor Rosa, Cacciari, and Tronti found the review Contropiano (Counterplan). It lasts until 1973. Negri leaves after the second issue. In this year, pamphlets are published by Linea di Massa (Mass’s Line) on the party committee’s struggles at Pirelli and on the organization of the technicians in the State’s petroleum industry (S. Donato Milanese’s companies).

1969
On 1 May, La Classe appears. The editors are Negri, Piperno, Scalzone, Bologna, Daghini, Magnaghi, Dalmaviva and others. In the summer of this year, there are extensive strikes at Fiat in Turin, the worker-student assembly is formed, and the first fliers with the title Lotta Continua appear. In September, the first issue of Potere Operaio, the newspaper of the organization, appears.

1971
Potere Operaio holds its third meeting in September at Rome.

1972
Negri and Bologna edit the “Marxist Materials” series for the publisher Feltrinelli, which publishes, among other things, Workers and the State, The State and Underdevelopment, The Multinational Worker, The Other Labor Movement, and Crisis and Labor Organization.

1973
The first symptoms of the crisis manifest themselves according to two lines: the first is represented by Toni Negri; the second by Piperno, Scalzone, Magnaghi, Dalmaviva, Marongiu, and others. Negri subsequently breaks with Potere Operaio and founds the review ROSSO (RED). In September, the first meeting of the Autonomous Workers’ Assembly is held. This is the point of departure for Workers’ Autonomy. Comrades from Milan, Porto Marghera, Florence, Bologna, Rome, the collective of Polyclinic and of Enel (National Company of Electricity) are present. Also in this year, Sergio Bologna founds Primo Maggio (May Day), a review of militant history.

1977-78
Autonomia appears at Padua. The newspaper / Volsci The Volscians appears at Rome.

Sergio Bologna participated in Quaderni Rossi and Cronache Operate in 1964. He founded Classe Operaia with Tronti, Negri amd Alquati. As an employee of Olivetti, he participated in the first attempts at unionizing the new white collar workers in electronics and in data processing. In 1966, he began teaching at the University of Trento. He also contributed to Quaderni Piacentini. At the end of ’68 he edited the first two issues of Linea di Massa. With Negri, Scalzone, Piperno, Dalmaviva and others, he founded La Classe (May 1, 1969). In September 1969 “Potere Operaio" was founded; Bologna, Negri and Piperno made up its first national secretariat. In November of 1970, he left “Potere Operaio” because of disagreements over the organization’s general policy.

In 1972, with Negri he edited the first four volumes in Feltrinelli’s “Marxist Materials” series. In 1973, he founded Primo Maggio, a review of militant history. In 1978-79, he supported the policy of returning to the worker’s centrality, the analysis of the large factories, and above all to the problems of the workers in the ware transportation sector. He has contributed to Lotta Continua, II Manifesto, II Quotidiano dei Lavoratori, the three dailies of the new Italian left. From 1970 on, he has been a professor of the History of the Workers’ Movement at Padua, in the same department with Negri and Ferrari Bravo.

Antonio Negri, having left the Italian Socialist Party, edited in 1959 Progresso Veneto. In 1961 he participated in Quaderni Rossi and later led the split with Raniero Panzieri which gave rise to Potere Operaio di Porto Marghera (1963) and Classe Operaia (1964). In 1968, together with Massimo Cacciari, Alberto Asor Rosa and Mario Tronti, he founded Contropiano. He left the review after the first two issues. In 1969 he was one of the main figures in the foundation of “Potere Operaio.” He took care especially of the international connections of the organization, and forwarded the publication in foreign languages of Italian workerist literature. He was the national secretary of the organization from 1970 to 1973, the year of his expulsion. From 1973 to 1974 he developed the theory of the transition from the mass-worker to the “socialized worker,” in which the role of the new social subjects becomes strategically important. In 1973, together with the other ex-members of “Potere Operaio” (among them Gianfranco Pancino) and ex-members of the “Gruppo Gramsci,” he founded the magazine Rosso and the organization of the same name. In 1973 he also founded, together with Emilio Vesce and Franco Tommei, the journal Controinformazione in which the Red Brigades were also involved. He left the journal after the first issue.

Since 1976 he has been considered the theoretician of Autonomy. After April 7, 1979, the date of his arrest, his political auto-biography appeared with the title Dall'Operaio-Massa all'Operaio Sociale, Multipla Edizioni.

Franco Piperno, having left the Italian Communist Party, became one of the leading figures in the student movement in Italy in 1964. Together with Oreste Scalzone, he led the university struggles in Rome in 1968, for which he was arrested for several months. He also played an important role, together with Adriano Sofri (leader of “Lotta Continua”), in the formation of the worker-student’s council in Turin, during the wild-cat struggles at FIAT in the summer of 1969. From 1970 to its dissolution, he was the main figure in the organizational stucture of “Potere Operaio.” He supported the centralization of the political leadership against Negri, who wished to see it dissolved.

Franco Piperno has always been more active at the organizational rather than at the theoretical level. From 1975 to 1977 he withdrew from active militancy. After the ’77 Movement he again played an important role in the definition of Autonomy. At the end of 1978, together with Oreste Scalzone, he founded Metropoli. He was arrested in August, 1979, in Paris and extradited from France on October 16.

Oreste Scalzone was, together with Franco Piperno, one of the most representative figures of the students’ movement in Rome in 1968. He was injured by the fascists during the occupation of the university. In 1969 he edited La Classe and, in September, founded “Potere Operaio.” In 1970 he moved to Milan and became one of the most active militants in mass demonstrations. In “Potere Operaio” he was instrumental in building connections between the organization and the general movement. He supported the political prisoners and the struggle against the special jails. For these reasons he still is the most popular figure of the “Potere Operaio” experience among the rank and file, and the spokesman of the organization.

After the dissolution of “Potere Operaio,” which he opposed with Piperno, he founded the magazine Linea di Condotta and organized the group called Comitati Comunisti Rivoluzionari. During the 77 Movement he played an important role in the representation of Autonomy and emerged as one of the most prominent figures in the Bologna Convention, September 1977. At the end of 1978, together with Franco Piperno, he founded Metropoli. He was arrested on April 7, 1979.

Franco Berardi, alias "Bifo”, was one of the main figures of the Movement of 77 in Bologna. He was arrested at that time under the charge of “subversive association”. We asked Bifo to write the following presentation on the context in which the Movement developed and the problems it had to confront up to, and after, the April 7 arrests. 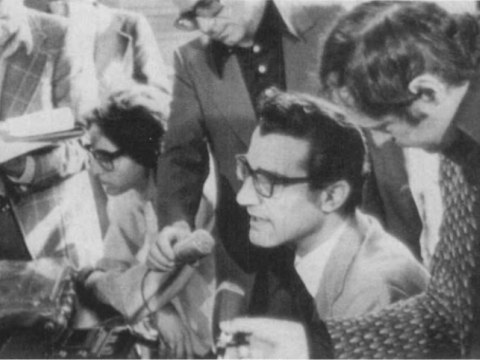 Arrested on April 7, 1979, Toni Negri appeared a few days later before his judges. As opposed to Oreste Scalzone, Negri then found it advisable…

This document was written on May 24, 1979 from the "Special Wing — G 8” of the Rebibbia jail in Rome by Mario Dalmaviva, Luciano Ferrari Bravo, Toni Negri, Oreste Scalzone, Emilio Vesce and Lauso Zagato. Footnotes were added by the Editors.

The following analysis of the April 7 operation was written by the New York Committee Against Repression in Italy (CARI).