Riots in Athens and Salonica in solidarity with anarchist on trial

Riots broke once again in the two big Greek cities, this time in relation to the trial of an anarchist accused of bank robbery. The troubles come at the end of yet another tense week in Greece.

In the morning of Friday 13/3 riots broke out in Athens and Salonica in relation to the coming trial of an anarchist, Yorgos Voutsis-Vogiatzis, who was arrested 18 months ago and is accused of bank robbery. In Athens, the down-town posh market area and ruling class residential area of Kolonaki, besides the Greek Parliament was gutted by protesters who smashed dozens of expensive shops, luxury cars and banks. Journalist sources talk of the greatest damage in the capital since the December insurgency, with virtually the entire Kolonaki shopping area destroyed. In Salonica at the same time protesters in solidarity to the accused anarchist damaged several banks in the center of the city. The riots have brought about a major clash between political parties in the Parliament as they come the same day that the American State Department announced a travel warning for the area of Exarcheia.

The riots come at the end of yet another troubled week in Greece. More specifically:

On Monday 9/3 afternoon members of the Open Assembly for Health occupied for four consecutive hours the cashiers of the Red Cross Hospital in Athens demanding total free health care for all. This is a continuation of a form of struggle against the commodification of health care that has been spreading throughout Greece after the December uprising.

On Wednesday 11/3 morning dock workers and lay-offs of the so-called Nautico-construction Zone of Piraeus attacked the fences and smashed the main entrance of the Ministry of Commercial Navy. In their effort to invade and occupy the building, the workers were confronted by special-forces of the port police. In the battle that ensued the port cops made extended use of chemicals and flash blast grenades thus managing to push the protesters back.

The same day, workers of the Ministry of Culture moved once again to blockade the Acropolis demanding their 4 months unpaid salaries and re-employment of their lay-off comrades. The government, despite previous threats to employ riot police against the strikers, proved reluctant to turn the ancient monument into yet another battle zone. The cul de sac of the negotiations has forced the President of the Republic to intervene pledging to look into the workers’s grievances himself.
Later the same day, a demo in solidarity with the arrested insurgents of December outside the Law School in Athens was attacked by motored police forces after stopping buses and spraying slogans on them. In the scuffle that ensued one policeman was injured before riot police forces pushed the protesters back into the asylum university area with extended use of tear gas.

On Thursday 12/3 morning, clashes between neo-nazis and leftists erupted outside the Athens High Court after the end of the retrial of Antonis Androutsopoulos or ‘Periandros’, the ex-deputy of the Golden Dawn [Xrisi Avgi] and leader of its combat battalions in the 1990s, who was condemned once again by the appeal court for the attempted murder of a Marxist student in 1998. The scuffle started after the neo-nazis zig-heiled the accused in the court-room. After the intervention of police forces, the leftists formed a demo in protest to the acquittal of the accused on two more attempted murder charges and the curtailment of his sentence by nine years. The demo marched to the center of Athens chanting “the people do not forget, they hang the fascists” and “TV, cops, and neonazis, all the scum work together”.

The same day in the afternoon, a march took to the streets of Ioannina, NW Greece to protest against the fascist-parastate attack against the Immigrants’ Social Center 15 days ago with a hand-grenade.

At the same time, hospital ambulance (EKAB) workers held a demo and blockaded the Ministry of Macedonia and Thrace in Salonica demanding better working conditions, pledging to continue their industrial action.

On Friday 13/3 morning clashes erupted between students and riot police forces in the city of Patra when the protestors tried to enter the hotel where the minister of education was attending a meeting with directors of technical universities across the country as part of his “tabula rasa” dialogue on educational reform, derided by the left as a parody.

Later the same afternoon protesters occupied simultaneously 6 stations of the metro-ISAP system in Athens in protest to the assassination attempt against K. Kouneva last December with vitriolic acid. Kouneva who is still struggling for her life was working as a subcontracted cleaner for ISAP. The protesters occupied the stations using the megaphone systems to read texts against capitalist exploitation and corporate violence, handling thousands of leaflets to passengers.

On the urban guerrilla front, the Revolutionary Struggle [Epanastatikos Agonas] has claimed responsibility for the two attacks on Citybank, with an 8-pages long communiqué to the weekly newspaper Pontiki. The leftist urban guerrilla group has in the recent past launched an RPG against the American embassy in Athens and shot a riot police squad with automatic weapons last January in revenge of the killing of Alexandros Grigoropoulos. In its communiqué, which mainly concerns an analysis of neocolonialism, the economic crisis, as well as the imperialist role of the Citibank colossus derided as “a lair of bandits and criminals’, the organization claims the daily Nea had been forewarned of the ultimately unsuccessful attack with AMFO against the Citibank’s greek HQs in Kifisia last month. The organization defended its strategy in detail, and pledged it takes all measures to prevent civilians from being hurt during its attacks and shall continue to make forewarning calls to the press so that trapped buildings are evacuated before destruction. At the same time, a list of the antiterrorist bureau was leaked containing names of over 80 targets, humans and buildings, that shall be guarded against future attacks. The leak comes only a day after the police admitted to the daily Vima that it has no way of preventing any new attacks, causing public hilarity and the anger of named personalities deemed to be in danger.

The unsuitability of the greek police to bear weapons was proved once again tragically on Thursday 12/3 when a riot-policeman off duty opened fire on two robbers at an electronics shop in an Athenean suburb. In the gun battle that ensued a 32 clerk lost her life, and one robber is struggling for his. The amount robbed was only 300 Euros. Psychometric tests performed for the first time after a series of events starting with the assassination of Alexandros in December have so far demonstrated that out of 50.000 armed cops in the country 3.000 must be immediately disarmed as unsuitable. There has been a wave of reactions to the latest incident especially as forensics claim they cannot identify if the clerk was killed by cop or bandit fire, leading many to suspect yet another police cover-up. The left has been urging for a total disarmament of police forces, a claim that gained more ground on Friday 13/3 when the chief of Kypseli's Police station, the most populated sector of Athens, shot a cafe owner for personal reasons.The chief cop had in the previous day passed his psychometric test for carrying weapons successfully...

A Saturday police report listed 80 shops, 37 luxury cars, and 6 banks, as the final countdown of yesterday's riots in Kolonaki, considered to be the most serious since the December uprising.

I watched a video my mum had taped in 2003 of all the news stories of anti-war protests. It was prime "protests around the world remained mainly peaceful, with the exeption of athens(picture of black clad figure throwing molotov at building), and new york where scuffles broke out with police.."

I'm half/half in fondness of this guerilla group. "you can't blow up a social relation" comes to mind, but then noone's gonna get hurt. I'd think that occupying and 'recycling' buildings for revolutionary spaces would maybe be more productive than evacuating and blowing them up.

Seems the Greek is fallin apart, i dont know much about the Greek goverment but at least the Nazi's and Fascists arent doing too well. 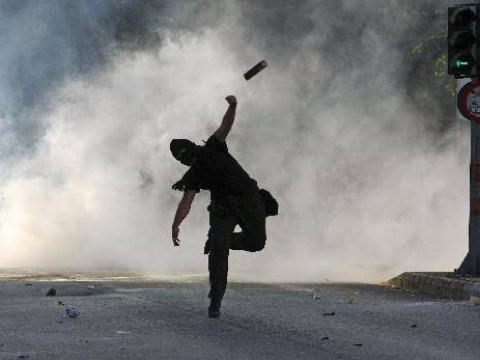 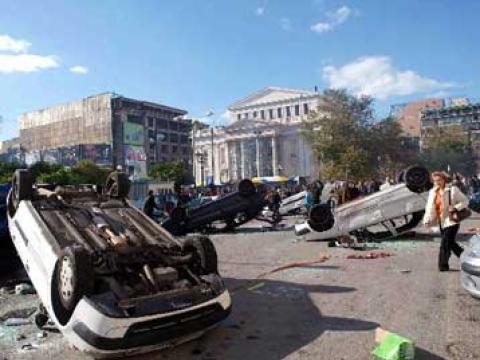 An open letter to students by workers in Athens, against the background of the social upheaval following the police shooting of a young boy. 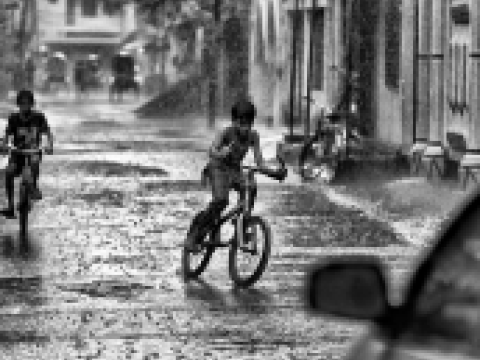