Very brief information about the landless movement and land struggles in South Africa.

Only 3 per cent of arable land was redistributed and much of that had been given to black commercial farmers and not to landless peasants. In the winter of 2001, hundreds of homeless families invaded an unused piece of land in Brendell. This was shortly after news of the Zimbabwe land invasions, and the prices on the Jo’burg Stock Exchange fell. The government got very nervous and brutally cleared the land and broke the shacks. After this, the LPM grew to thousands, including many city-dwellers. During apartheid the African population had 13 per cent of the land, with the remaining 87 per cent of land held by white farmers and the state. Despite promises of redistribution and tenure reform, in 2001 African people occupied about 14 per cent. There are many shocking reports on the National Land Committee’s website [www.nlc.co.za] of brutal land clearances of settlements that have been there for years, and which are homes to thousands of poor families.

Miners in South Africa voted on Friday to launch an unlimited strike. 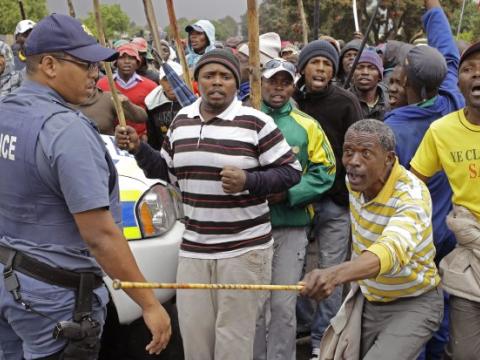 For the second time in the last few months vineyard workers in the Western Cape Province, South Africa have clashed with bosses, scabs, private…