As I write [early September] we are approaching the first anniversary of the dispute which was sparked off by the dockers refusal to cross the picket line mounted by dismissed dockers employed by an ‘independent’ stevedoring firm called Torside. In Britain in the 1990s such sympathy or in the words of the legislation, ‘secondary action’, is illegal.

The policy of the dockers remains one of insisting on the full reinstatement of all dockers dismissed on the terms and conditions they ‘enjoyed’ prior to the dispute. Now I was going to begin this report/commentary on a note of criticism of the dockers. By concentrating on re-instatement, the dockers I thought, were allowing what I conceived to be the major question of casualisation [what Jimmy Nolan, Chair of the Dispute Committee confusingly calls ‘employment contracts’] to be lost from view. But of course this is looking at events at the surface and missing what is going on underneath. It is, in my opinion the first duty of communists, anarchists or whatever we call ourselves, to look beyond the surface of events and try and penetrate what is really going on. That is, it is first of all our job to try and understand. So here is my attempt.

The policy of total re-instatement which is endorsed every Friday at the mass meeting of dockers and their supporters is actually what used to be called by the American SDS student movement in the 70s a ‘non negotiable demand’. That is, given the changes in the economy since the [Keynesian inspired] National Dock Labour Scheme was abolished in 1989, there is NO WAY the Mersey Docks and Harbour Company can allow a return to the previous situation. In any case a whole new scab labour force has been recruited, trained and is even now driving up productivity levels to unheard of heights. So, for instance when ACL came back to the port, the 80 dockers who left ‘voluntarily’ were not replaced. The fact that there is now a regular turnover of scab labour which cannot cope with the new casualised way of working and the much reduced pay, does not bother MDHC. They have a core layer of skilled workers who are prepared to take on and train a succession of casualised and atomised workers to do the bulk of the basic work in the port. The fact also, that it has been become more dangerous to work in the Port of Liverpool does not bother them either.

Those of you who have been following my reports will know that we have argued that this is a generalised and long term trend in all workplaces - and it spells the end of the post war Keynesian based consensus which we had all become used to. Space prevents me from going into this in any more detail here, but we are working on a much longer analysis in which we hope to demonstrate this clearly. All this being the case, the dockers official policy is, I have come to realise way behind their real thinking and practice. The only ‘negotiations’ going on are those sponsored by Bill Morris and the T & G national and local officials, ably abetted by the ITF, who have made it quite plain that a ‘compromise’ must be found over the heads of the dockers. And obviously not in the interests of the dockers but because Morris and Co have been visibly shaken by the dockers international campaign and the open discussion on 5 continents of the idea of forming a new international dockers union.

Morris came to Liverpool and attempted to lay down the law about ‘unofficial action’ and going through official channels and just showed how out of touch he is. Unfortunately, although many dockers would willingly have told him where to go - they are held back by the fact that they are still to a major extent financially dependent on the union, and could find themselves slung out of the T & G building which they have made their own almost, for the past 11 months. And more importantly because they are at the end of the day only some 500 and as yet neither they, nor us have seen any ‘echo’, or sufficient evidence from other groups of workers similarly affected, in conflict with ‘their’ unions.

I said at the beginning that the dockers had allowed the question of casualisation to slip from the forefront of their campaign, but actually that is not quite accurate. Because the campaign is around a ‘non negotiable demand’ for re-instatement, the dockers are not sitting around waiting for the MDHC to cave in - because they now understand that they will not. Mike Carden on the dispute committee posed the question at the time when ACL came back to the port and when there was some understandable gloom about the future of the dispute - where can we go ? There is no offer ‘on the table’, all we have is struggle.

And struggle is what the dockers have been engaged in. And struggle, as we know changes everything. Wherever dockers have gone to speak in this country they have faced concretely the question of casualisation, they have urged workers to struggle, to support them financially but also to learn how they have done things for themselves and to have the confidence to do things likewise. In the process this group of workers has been utterly transformed. What was by their own admission a sectional, racist and inward looking, male dominated group is now working consciously to transform itself into something else. Some of these people can never go back to the kind of life they had before.

If we needed concrete proof of this, it is in the recent approaches of the dockers to eco-warriors and other ‘marginalised groups’ for help and information on ways of waging the campaign; it is also in the contacts the dockers and the support groups are beginning to make with other ‘social’ movements against the Job Seekers Allowance for instance, which will hit dockers just as it hits other members of the unemployed. Within all these movements the dockers are starting to play a role in ‘knocking heads’ together. So many of the delegates who have gone all round the country have come back saying they are fed up with having to put up with members of the Left playing their silly games.
From Subversion #20 (1996).

The first of two articles in Subversion #19 about the Merseyside Dockers - includes details efforts to establish international contacts and solidarity. 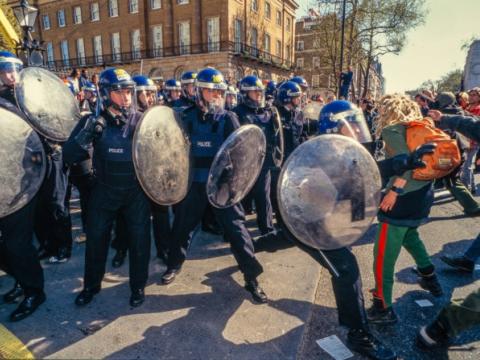 There’s no justice, just us! Subversion

The March for Social Justice in London, supporting the Liverpool Dockers, saw another explosion of violence against the police. In opposition to…