Africa and the future - Jeremy Westall

Article about the relevance of anarchism to struggles in Africa, pre-and post-independence. We do not necessarily agree with all of it but reproduce it for reference.

There was a time when I was very involved in the Africans' struggle, but as the obvious facts about the newly independent nations were faced, one had to recognise certain unmistakable trends if honesty was to be preserved. From a genuine excitement over the independence of Ghana, my feelings developed a less vigorous tone, and slowly the truth began to dawn. Although it is quite evident that Africans — given the technical knowledge — are far better at running their countries than were their white rulers, it is also plain that the changes in Ghana only took place at a very superficial level. With a growing number of people on the Left I am finding that in all the African countries with new-won independence, the basis of their society and the pattern of authoritarian rule continues, with Africans instead of white men in positions of power. Where I had naively supposed that the African "revolution" was heralding a new dynamic society, in fact a bourgeois elite of African middle-class nationalists has taken over the reins and no fundamental change has taken place. As far as the anarchist vision of a free society is concerned, the new ruling classes in Ghana, Nigeria, Guinea and the Congo are as much the enemies of freedom as are all other ruling classes.

In so far as the struggle for independence in Kenya, Rhodesia and Nyasaland gains my enthusiasm, it is because I recognise that the assertion of African independence must come before the possibility of a free society can even be considered. Yet the opportunity of turning the struggle for independence into a revolutionary struggle is being ignored by African politicians like Mboya in Kenya and Kaunda in Rhodesia because they only desire a political change of black for white rule. Dr. Banda in Nyasaland, in fact, only speaks English and is admired by his obsequious supporters for his "European" ways. Jomo Kenyatta was the only African leader with courage enough to inspire his supporters to revolutionary action but it seems that he is now attracted to political action, which is at least understandable after over seven years' incarceration.

Yet whatever one says or thinks of the African nationalist politicians, it is good to see a people throwing off the yoke of colonialism. To me the thought of one nation forcing its customs and culture on to another is so despicable that I rejoice in the fact that the Africans want to make their own way. This is what gains my qualified support for the various struggles for independence. What I do emphasise however is that the struggle is only for independence and is, sadly, nothing to do with freedom.

In South Africa the position is somewhat different: here I really feel involved in the anti-apartheid campaign and I believe that this is a radical movement of importance to libertarians. This is mainly because parliamentary action is out of the question for any real opposition to Afrikaner fascism. Direct action, passive resistance and civil disobedience are all leading South Africa in a revolutionary direction. And the Africans there, faced by the manifestly pernicious nationalism of the Afrikaners, and noticing the appearance within their own ranks of its African equivalent, are recognising the evils that nationalism must bring.

Racial integration is a desperate issue in South Africa and racial conflict is now more or less certain. Although I am not a pacifist I argue for a completely non-violent anti-apartheid movement because in any violent conflict the Africans would inevitably suffer very heavy losses. In fact there have been obvious examples of the South African government seeking to instigate violent action among the Africans. Racial integration is a world-wide problem, difficult to solve in any competitive society. I am quite convinced that racial harmony cannot result from legislation or from moral pronouncements; it can only come from a deep respect for the culture and people of another ethnic group. Libertarians, people who don't care about "getting on" have here a vital part to play, for it is only possible to be truly comradely with people who are not viewed as competitors or as potential competitors, but as friends who are likely to be interesting and who will widen one's outlook. We should be encouraging cosmopolitanism for the sake of the increased variety and added depth that it always brings to life.

For myself I always find it easier to sympathise with the coloured person who sees little to respect in our white civilisation than with the European who finds nothing of value in the heritage of non-European peoples. African culture is fascinating: the new writers who are emerging and have emerged since the war, the new music that is being played throughout the continent as well as traditional music, the sculpture, the vastly intriguing African history that is being unearthed. The writers of the French-speaking part of Africa, represented by the négritude school with its outlet Préscence Africaine impress me a great deal, yet two men Ezekiel Mpathelele and Jomo Kenyatta, from South Africa and Kenya respectively are of even greater interest, Mpathelele as the author of that most anarchic book Down Second Avenue and Kenyatta as Africa's first and foremost African anthropologist. Nigerian sculpture and the wood carvings that one finds all over Africa have always attracted me, as well as the basket weaving at which many tribes excel.

But the real art at the heart of Africa — the dance — is the finest and most warming attribute to come from Africa. It is thought-provoking to note the popularity of jiving in all Westernised countries, and of course, the overwhelming influence of jazz on the musical scene everywhere. The force of the Negro on European writers is very marked — the influence on Norman Mailer in America or Colin MacInnes here, are but two examples. In fact the whole movement of dissent both here and in America is impregnated with a desire to understand and get along with coloured people — not because of a sense of duty to the Great Democratic Institutions, but purely because young dissenters want to.

In this connection the differences between the characteristic European outlook and the African conception of life are of great importance, for they point to certain attitudes of mind which are taken for granted in the Western world and which we must consider critically if we are to appreciate the African outlook. In his book The African Mind in Health and Disease, J. C. Carothers writes:

"It was previously argued that the peculiar features of European mentality derived from a total personal integration which the African does not achieve. Yet, in another sense, the latter uses his whole brain more effectively than does the former; he uses phantasy and reason. European integration is essentially a conscious one and depends on a cleavage between conscious and unconscious elements of mind which is far less sharp in Africans. Advantage does not lie wholly with the former. The European technique depends upon the denial, in adult conscious life, of desires and phantasies which are thus relegated to a world of darkness and of dreams, but which emerge only too often, to determine patterns of thinking and behaviour which are incomprehensible or even incapacitating from the subjects' point of view. There is internal conflict, and a sacrifice of personal to social peace and happiness. There may be other sacrifices.

"Fromm says: 'Dreams can be the expression both of the lowest and most irrational and of the highest and most valuable functions of our minds.' The African is not asleep, but he does seem to live in that strange no-man's-land 'twixt sleep and wakening where fact and fancy meet on equal terms. If the hypnotic state is one in which awareness is heightened though restricted, then monoideic consciousness is a pre-hypnotic state; and it may be that certain mental powers of a social type — intuition, hypnosis and telepathy — are seldom fully realised except by those who spend their lives in that ill-surveyed land."

One begins to feel that Western man has done the most arrogant of acts in the process of acculturation in Africa: the teachers should have been taught by their "pupils". The concept of a White Negro may seem odd to some, but I feel that we have much more to learn than to teach. It all rather depends on your set of values.

The probable future of Africa is depressing. The probability is that Africa and Asia will ignore the best in their cultures and tend towards the worst. They will perhaps turn into imperialist powers seeking to dominate the world (always supposing there is one left to dominate). What could always happen is that proletarian revolutions will take place in the newly independent African countries when their peoples recognise their leaders for what they are. However it does seem likely that those very things that are so vital to Africa, the things that attract us in the West because of the lack of them in our own society — the throbbing vitality and the deep mystery of experience — will be snuffed out as the African continent becomes dictatorial, totalitarian, and then imperialistic, as it becomes industrialised and westernised.

Yet what would an anarchist hope might happen? What would he encourage an African who holds anarchist views to try to do in his country? For myself, I would encourage the preservation of the cultural heritage manifest in the tribe, yet the tribal system itself needs to be infused with a libertarian spirit. In some tribes before the European invasion, there were no chiefs. The Ibo in Nigeria, the Kikuyu of Kenya and the Tonga of Northern Rhodesia are three examples where we have already the basis for a fundamentally decentralist society. I should also emphasise the worthiness of African village life, and the evils of industrialisation, even though the rejection of all things Western would be a great mistake. I should encourage a critical absorption of those things considered worthwhile and important [I]by Africans/I]. Technical assistance, though valuable should not be allowed to infringe on the freedom of choice of the people concerned. Africa[I] could/I] have a truly magnificent future from a libertarian point of view. Yet whether it will be a magnificent future is another matter.

JEREMY WESTALL resigned his job in the Provincial Administration in Northern Rhodesia (after experiences which he described in University Libertarian No. 11) and returned to this country where he is now a student of sociology at Hull.

On Wednesday 11th January 2006 armed police raided the offices of the Zimbabwe Congress of Trade Unions (ZCTU) seizing documents as the government steps up a crackdown against civic society. 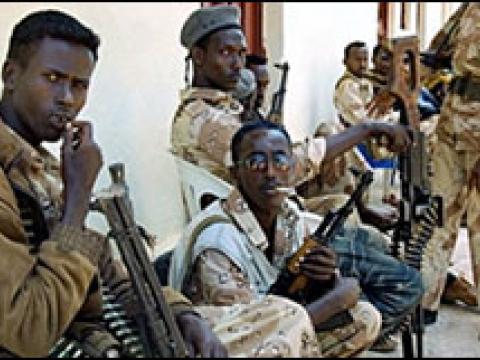 Soldiers have taken control of government buldings in the Central province of Hiran after going seven months without pay.