Africa and the Future

The paradox, described by Jeremy Westall in Anarchy 3, in the anar-
chist attitude to the struggle of colonial peoples for independence is
inevitable. For as Freedom once put it; even the newest nations 'face
a new life with hardened arteries; they have learned nothing from
the past, they think and act along the lines of their persecutors and
oppressors.' The tragedy is heightened by the fact that the educated
and articulate minority upon which so much depends, are shaped in
their thinking by the same assumptions which lie behind the political
systems of their former masters.

I am sure Westall is right in his qualified eulogy of the tribal system
before it had been broken up by European influences and perverted by
the strategy of indirect rule. Col, Meinertzhagen, an 'old Kenya hand'
who has known the Kikuyu longer than any other living European,
writes

There was nothing solitary, cheap brutal or cruel in their tribal customs.
Their life was gregarious, innocent and healthy. There was no poverty, for
land was plentiful and work a joy; they were a delightful people, enjoying
life with their dances and singing, busy as bees with their intensive' cultiva-
tion and giving very little trouble; they enjoyed drunken orgies and free
sexual intercourse was practised as a part of ritual occasions; such vices
are not unknown in the most civilised countries. Polygamy took care of
the orphan and widow; filial piety alleviated the trials of old age; it was
a perfect society but with noe great flaw. Everything was so completely
integrated with everything else that European intrusion impinging on any
single part of this delicate tribal mechanism threw the whole machine out
of gear.

In the Gold Coast . . . under the old system Village Councils usually
comprised all the male inhabitants of the Village concerned, normally sum-
moned to meetings by beating of gongs, ringing of bells or other traditional
methods of announcement. Under the modern system only a few people,
selected by election, constitute the Village Councils

And Richard Wright attempts in Black Power to describe the tribal
community :

You may never get rich, but you'll never starve, not as long as someone
who is akin to you has something to eat. It's communism, but without any
of the ideas of Marx and Lenin. The men with whom he shared his life
were his brothers; men of the same generation were brothers, not the sons
of his mother, but men to whom he felt a blood relationship, brothers
who fed him when he was hungry, let him sleep when he was tired, consoled
him when he was sad. He had a large 'family' that stretched for miles and
miles ... I. tried to visualise it and I could not.

Now obviously here are two facets of the old tribal culture which
could be built into a new social order, the first into a network of village
communes a great deal more successful than the local councils on the
British pattern which have been set up in Ghana, and the second into
a system of mutual aid more genuine and comprehensive than any
'welfare state'. What actually happened of course, is that the imposition
by the British of chieftaincies as part of the structure of indirect rule
destroyed the 'democracy' of tribalism, while the nationalist politicians
have made use of the most primitive and irrational features of the tribal
system for political purposes.

There are millions of Africans, moreover, for whom tribalism is
something out of the past, which they have escaped from, and they
associate with it, not those virtues which we see in it from the outside,
but narrow horizons, lack of economic opportunity, intolerable family
pressure to conformity, a warm and cosy Ghetto which you can look
back to with affection once you are safely outside.

The task for African propagandists of anarchist ideas is thus
doubly complicated. How to combine the virtues of the half-discredited
village society with the personal independence, the freedom of choice,
the wider outlook in occupation and consumption, which urban society
offers? Have we in Europe any answer to this question? J.E. 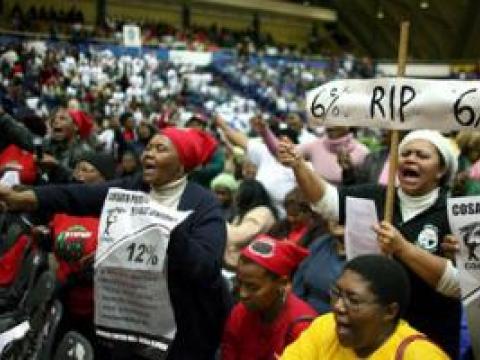 Class struggle in Maghreb and Mashrek...