Written by 2 Nigerian anarchists, members of the Awareness League, the book contains a useful potted history of anarchist theory, a sideswipe at the failure of "African socialism" and asserts that "the process of anarchist transformation in Africa might prove comparatively easy, given that Africa lacks a strong capitalist foundation, well-developed class formations and relations of production, and a stable, entrenched state system." Given the comrades' own experience of the vicious resilience of the military in propping up the status quo in Nigeria, this seems more than a little naive, particularly as the book's only suggestions as to strategy in this regard are for a "long term program of class consciousness building, relevant education and increased individual participation in social struggles."

Nevertheless, the book is particularly illuminating in detailing anarchist precedents in African communalism, drawing on past work by such writers as Walter Rodney in How Europe Underdeveloped Africa. In traditional African societies "communities produced surpluses of given commodities which they exchanged, through barter, for those items they lacked. The situation was such that no one starved while others stuffed themselves and threw away the excess." The authors examine the "stateless societies" of the Igbo, the Niger Delta peoples and the Tallensi, based on extended family structures, clan societies and village councils.

They refer favourably to the writings of the Tanzanian Marxist Julius Nyerere and his concept of Ujamaa, "familyhood"- "rural economic and social communities where people live and work together for the good of all, their governments are chosen and led by the peasants and workers themselves."
The authors establish that the Ujamaa model "failed because it degenerated into state control over the peasants. Through its bureaucrats and technical assistants, the state started to dictate to the peasants what to do and what not to do, what to produce and what not to produce. Soon, too, the World Bank and other aid donors hijacked the program." Equally, the authors are clear that, contrary to some in the anarchist movement, rural subsistence is not a positive alternative to state socialism; that what African people require is "equality and an end to extreme want." The book is a genuinely provocative and exciting contribution to the development of an anarchist movement in the struggle for liberation in Africa. In welcoming it, however, we should not be blind to its weaknesses. The decolonisation of Africa took place under the banner of the battle for national independence. Given the arbitrary nature of so many African nation states, this was merely a flag of convenience for the comprador bourgeoisie. The book makes brief reference to the way in which ethnic tensions are used to undermine opposition across Africa, and notes that the roots of communal hatred often lie in an arbitrarily created ethnic/state consciousness. It posits class consciousness as the solution without looking at how ethnic consciousness can be drawn down the road of class awareness. In particular the authors give no consideration to ideas of Pan-Africanism, or to the concept of African Inter-communalism as put forward by the Panthers in the 60s and taken up by groups such as Black Autonomy now.

Equally, while scathing about the past failures of state socialism in Africa, the authors are silent about those who don't quite fit the mold. The book gives no consideration to the methods of organisation of Polisario, whose militias and structures, in war conditions, are organised along libertarian lines. Nor does it consider the initiatives of the Eritrean Peoples' Liberation Front, which has managed to cohere a society of nine different ethnic groups, and make genuine efforts towards the liberation of women; has land under community control, dams built, millions of trees planted and civil society slowly rebuilt with minimal centralisation of powers. Unless anarchists (and not just in Africa) are able to develop a critical but supportive relationship (i.e. real solidarity not just words on paper) with libertarian left movements engaged in real struggles - and this applies as much to the EZLN in Mexico as to the EPLF - we will forever be assigned to the roles of holier-than-thou carpers and backbiters, rather than seen as those most stridently engaged in the battle for liberty and equality. The Awareness League, we should remember, began, in their own words as "a leftist coalition composed of marxists, trotskyites, human rights activists, and leftists and radicals of various persuasions, and only cohered as an anarchist current in 1990, following critical analysis and debate over the collapse of Eastern European state socialism." As they moved, so others will follow, but not if we make the precondition for support of ongoing struggles wholesale ideological adherence to our flag above all. As Afuerke Isaras of the EPLF noted, "Third World societies should come out with new theories about their 'socialist' transformation." 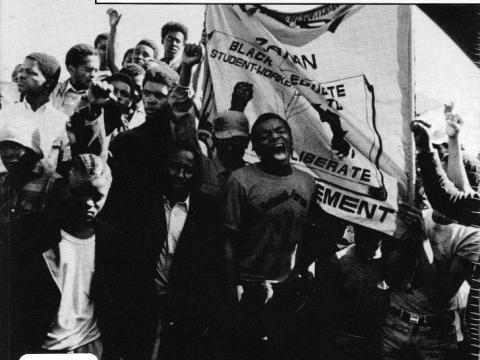 HENRY DOWA, born in Lagos, 1935, is now at the Polytechnic, London.