Short account of a successful campaign for education funding.

In the past there were various ways for students to achieve university entrance in Bremen apart from the traditional Abitur (A levels also called Abi) route. One of these was at the 'Bremen school for adults' where a project called 'Institute for the education of adults' (IFE ... in German written 'ife') was established after some struggle.

At the ife there were 'normal' students who got maintenance grants and loans (the German Bafög system) and who could apply for the Abitur exams after 3 years of studying. The prerequisite was that they had to have either completed an apprenticeship or worked for 3 years.

There were other students - especially women- who did not meet these requirements who were allowed to attend classes as 'guest students' but who weren't given any financial support. Two of these guest students were members of the FAU - IAA who had planned to be able to study for university entrance in this way. One of them had moved to Bremen from southern Germany in order to do this.

Then one week before the start of term, the education authorities abolished this guest student status - which would have meant the end of the educational plans for these people. The guest students didn't accept this decision however and proceeded to organise actions with FAU members in Bremen and sympathetic students. They informed other classes about what was going on - their 'lecture bashing' (uninvited visits to classes) got a very good response. Leaflets and general meetings were used to keep the student body as a whole informed of what was going on. The FAU supported the action with advice, connections, a bit of money and a sticker - Abi for all!

A number of visits to the education authorities were made, press releases were sent out and other ways of raising the pressure were found - for example a summer festival was held on the school site. Legal routes were also pursued - a lawyer was consulted - which wasn't seen as being contrary to anarcho syndicalist politics by the FAU Bremen.

The students didn't take no for an answer and began attending classes despite the ban. The pressure grew on the administration ... and 'suddenly' a legal loophole was found (thanks of course to the pressure from our side) which was then used to let the students study ... and the story gets better ...

Some weeks later the two students were enrolled as full students with maintenance entitlement. As part of this the previous regulation which restricted students to guest status was removed and the students received a significant grant back payment!

A few months later the FAU formed its first education syndicate which was active at Bremen Uni as well as the School for Adults.

Translation from German by John Carroll 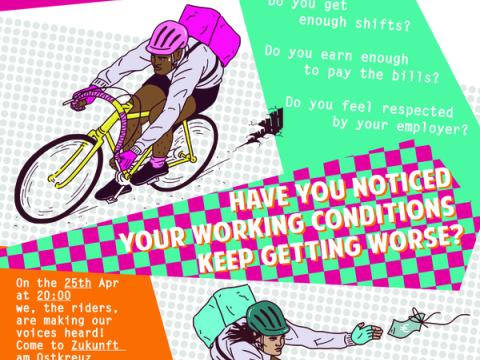 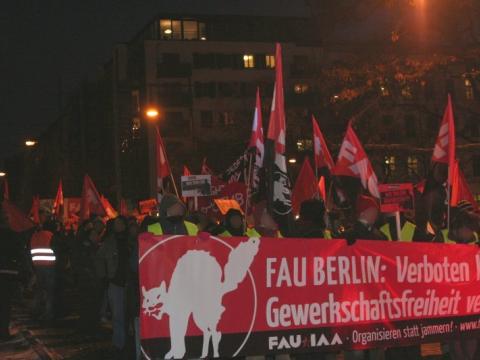