In the run up to the presidential elections, a war in Chechnya is a useful distraction from the economic chaos and corruption of daily life in Russia.

Overseeing the aerial bombardment of Yugoslavia, Tony Blair justified NATO'S actions in the name of a "new internationalism where the brutal repression of whole ethnic groups will no longer be tolerated." Those of us who condemned this "military humanism" (as Noam Chomsky has dryly termed it) as the same old imperialism in post-Cold War guise were denounced by the state department socialists of today. The slaughter of thousands of Chechens by a resurgent Russian military, though, has roused neither the ire of the NATO 'internationalists' nor their 'humanitarian' cheerleaders. Beyond token condemnation of the 'excesses' of the Russian military, the butchery in the Caucasus has become an 'internal' matter for Yeltsin, Putin and their generals to deal with as they see fit. Moscow's ultimate aim, as in its ill-fated 1994-96 war, is to install a puppet regime in Chechnya.

In the run up to the presidential elections, a war in Chechnya is a useful distraction from the economic chaos and corruption of daily life in Russia. Anatoly Chubais, a Kremlin insider, has remarked that "the Russian army is being revived in Chechnya." Putin clearly relished the opportunity to use a popular war to underwrite his claim to the presidency. It should be re-membered that the pretext for the invasion of Chechnya was the battle against `terrorism' in response to apartment block bombings last year which killed 300, and which Moscow blamed on Chechen militants. Not a scrap of evidence has been produced to demonstrate a Chechen connection to the bombs and given Putin's KGB links and the level of premeditation involved in the Chechen invasion, we should be cynical as to the real source of the bombings.

In 1994-96, Russian soldiers were slaughtered in their thousands in combat in the region. This time, inspired by the NATO campaign in Yugoslavia, the Russians decided to raze the region through aerial bombardment before risking engagement on the ground. Thousands of refugees attempted to flee the region, only to be held in camps at the Ingushetian border, where they froze or starved. Over 300,000 were displaced by the Russian onslaught.

Russia has fired tank shells at teenage boys in Novy Sharoy, pummelled the village of Samashki with aircraft, rocket-launchers and tanks even though they know the village is empty of rebels, and signalled its intention to destroy the city of Grozny. Russian bombers were flying more than 100 sorties a day over Grozny. The mayor of the City, Lecha Dudayev, reported that over 500 died over the weekend of 27-28 November.

It has been suggested that the West's apathy in the face of the slaughter of the Chechen people (in greater numbers and with greater force than Milosevic's forces used against the Kosovars) is a result of its having no strategic interest at stake. In fact, the opposite is true. The Russian elite and the politicians of the West have a common agenda, the looting of the wreckage of the USSR. Since 1991, over $200 billion has left Russia, with both legal and illegal currency finding its way to Western banks. On 19 August the New York Times reported that up to $10 billion may have been laundered through the Bank of New York since 1998. The asset stripping of the USSR has been cheered on by the IMF, the World Bank and the US Treasury.

Meanwhile, some 70% of Russians now live below the poverty line, and capital investment is one-tenth what it was a decade ago. Those denounced as 'corruptionalists' when they're caught out are the liberal reformers Washington, Berlin and London have kept in power. They remain the West's first choice, and the impoverishment of the Russian people, and the massacre of the Chechens cannot be allowed to stand in the way of business as usual.

Blair's 'new internationalism' has proved itself quite content to watch while Moscow seeks to drown in blood the Chechens' right to independence. Yeltsin, Putin and 'reformers' like Anatoly Chubais (who supervised the give-away of the USSR'S oil, metal and telecommunications assets) are worth money to the West. Chechen lives have no value at all. The rules of war in the era of 'military humanism' seem clear enough. As Umar Vitayev, a Chechen refugee, observed;

"Everything has been destroyed; our factories, our industry. We're going to have to remain dependent on someone, because we don't have anything left."

NB: The following appeared in the web version of this issue of Black Flag.

On 12 December anti-war activists took action against the war in Chechnya on one of the main streets in Moscow "Tverskaya". The idea was to declare "Tverskaya" as an area autonomous from the state and the Russian army. 27 people (mostly anarchists and people from Rainbow Keepers) took part but the action lasted only about 10 minutes until 7 people were arrested.

The Transnational Radical Party, Russian Democratic Union, Movement against Violence (Ekaterinburg), Tatarian Muslim party "Vatan" and Revolution Contact Committi (a new group) have organized several actions but usually with only 3-20 people each time. Anti-war stickers have been put up in the underground with slogans like "The state is the main terrorist", "No war", "Bring the army home", "War-money-war" on the walls.

But it isn’t easy: Moscow is full of police and there is a pre-election campaign with the usual attendant propaganda. Most people don't support the protests against the war and the media won’t report anti-war actions. 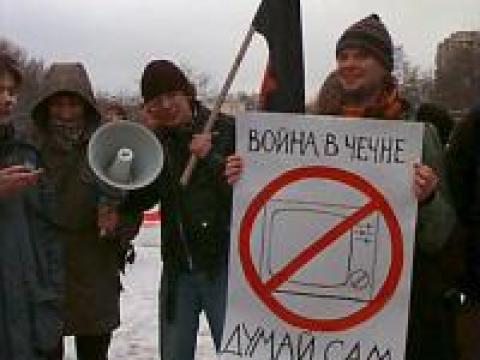 Anarchists and the second Chechen war

Detailed article on the war in Chechnya and historical background in the northern Caucasus from an anarchist perspective by Autonomous Action.