This was published in Black Flag #208, in 1996 not long after the horrific massacre at Dunblane. The media at the time were pre-occupied with gun control, here Albert Meltzer argues that they missed the point.

The Dunblane Massacre -
What Made Hamilton Tick?

Thomas Hamilton walked into a classroom at Dunblane, where he was well known, and shot the teacher and almost the entire class of five year olds. In the national mourning many questions were raised as to how this could have been prevented. As he had killed himself anyway, like Fred West the serial murderer-rapist, there could hardly be any of the usual cries for the re-introduction of the death penalty. Though it was generally claimed that it is all the harder for parents who can't understand why Hamilton acted the way he did, it was taken for granted politics must be kept out of it. Now that it is passed over as yesterday's news, perhaps the time has come to make those politics known.

Political understanding has everything to do with it. The police, local councillors, even the Secretary of State for Scotland, knew the man, had interviewed him and either failed to note he displayed obvious Naziclone tendencies or more likely ignored them as irrelevant to his having a gun licence. He was not far from their own mentality, just far enough to make him a misfit.

With the gun lobby on the defensive the question was raised of peaceful farmers or local people in the Highlands and Islands needing handguns to shoot rabbits, either as a pest or for food where vegetables and fruit are rare and expensive. It should be noted that the same Scottish Office which granted a gun license to Hamilton, refused one to an Islands resident, then an editor of Black Flag with no criminal convictions, who just wanted to shoot rabbits like everyone else there. Why? On account of his 'political extremism'. For them, Hamilton was 'a bit queer perhaps but otherwise one of us.'

One can distinguish, though they are all obnoxious, between the fascist who wants to keep down the working class by all necessary means, and also the one who thinks it is an alternative political or racial theory which may perhaps entail violence against those naturally or forced into being defenceless. There is another type one may call the ''naziclone', i.e.someone who doesn't give a shit about the political or racial side of fascism or nazism but glories in the inevitable atrocities. The fantasist-fascist of this ilk is not uncommon though often confining him/herself to a dreamland where a handsome young führer struts through Whitehall planning mayhem. They can be incited to enact their fantasies by fascist propaganda, but also by reading anti-Nazi books. They lick their lips over the Holocaust books and bemoan insufficient illustrations. Colin Brady was one such, and with his partner Myra Hindley tortured and murdered small children from around the neighbourhood.

How could Hamilton's nature have been recognised? True, he had done nothing for which he could have been charged but clearly gun licences are subject to political assessment. Only the Establishment found his credentials impeccable.
All naziclones have an obsession with lethal weapons, over and above any use of them. They enjoy imposing harsh discipline. Swaggering with pistols is a kick in itself. They also have an obsession with physical fitness and discipline, especially in training young men and boys. 'Strength through joy means powerlessness through control'. None of this is necessarily anti-social but it didn't need a Sherlock Holmes to find the dangers in this case.
Naziclones usually despise women and often are rapists; they sometimes have sexual relationships with boys or young men whom they can treat as women. But they equally hate homosexuals with consenting sexual urges or loving relationships. Hitler put them in the death camps, didn't he?

The naziclone from Stirling spent his time training youngsters to physical fitness. He spent his hard-earned money photograph-ing young but fit boys in skimpy shorts. He toted as many guns as possible. He was bitter at being excluded from the bonding of the gun clubs, and refused entry into the Scout movement, after paedophiliac allegations which may or may not have been true.Why? They regarded him as a pervert, he protested. He petitioned Her Gracious Majesty but even She did not help her loyal subject. What was left to a naziclone but to act out his fantasies:- stage his own mini-holocaust and exit on a grand scale like the great man himself? And they say they can't understand it!

The debate centres on whether we should restrict gun llicences. It would be better to turn our attention to naziclones and how to restrict them socially. 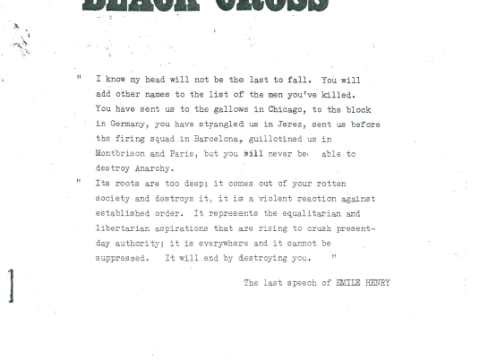 The first issue of the Bulletin of the Anarchist Black Cross, kindly scanned in by the comrades at Centre international de recherches sur l…