Men, if they cannot attain what is necessary, tire themselves with that which is useless.

This statement is usually taken to mean that man has needs which he is obliged to satisfy.

In this way people are transformed from historically determined units into a duality (means and end simultaneously). They realise themselves through the satisfaction of their needs (i.e. through work) so become the instrument of their own realisation.

Anyone can see how much mythology is concealed in statements such as this. If man distinguishes himself from nature through work, how can he fulfil himself in the satisfaction of his needs? To do this he would already have become ‘man’, so have fulfilled his needs, which means he would not have to work.

Commodities have a profoundly symbolic content. They become a point of reference, a unit of measure, an exchange value. The spectacle begins. Roles are cast and reproduce themselves to infinity. The actors continue to play their parts without any particular modifications.

The satisfaction of needs becomes no more than a reflex, marginal effect. What matters is the transformation of people into ‘things’ and everything else along with them. Nature becomes a ‘thing’. Used, it is corrupted and man’s vital instincts along with it. An abyss gapes open between nature and man. It must be filled, and the expansion of the commodity market is seeing to it. The spectacle is expanding to the point of devouring itself along with its contradictions. Stage and audience enter the same dimension, proposing themselves for a higher; more far-reaching level of the same spectacle, and so on to infinity.

Anyone who escapes the commodity code does not become objectified and falls ‘outside’ the area of the spectacle. They are pointed at. They are surrounded by barbed wire. If they refuse englobement or an alternative form of codification, they are criminalized. They are clearly mad! It is forbidden to refuse the illusory in a world that has based reality on illusion, concreteness on the unreal.

Capital manages the spectacle according to the laws of accumulation. But nothing can be accumulated to infinity. Not even capital. A quantitative process in absolute is an illusion, a quantitative illusion to be precise. The bosses understand this perfectly. Exploitation adopts different forms and ideological models precisely to ensure this accumulation in qualitatively different ways, as it cannot continue in the quantitative aspect indefinitely.

The fact that the whole process becomes paradoxical and illusory does not matter much to capital, because it is precisely that which holds the reins and makes the rules. If it has to sell illusion for reality and that makes money, then let’s just carry on without asking too many questions. It is the exploited who foot the bill. So it is up to them to see the trick and worry about recognising reality. For capital things are fine as they are, even though they are based upon the greatest conjuring show in the world.

The exploited almost feel nostalgia for this swindle. They have grown accustomed to their chains and have become attached to them. Now and then they have fantasies about fascinating uprisings and blood baths, then they let themselves be taken in by the speeches of the new political leaders. The revolutionary party extends capital’s illusory perspective to horizons it could never reach on its own. The quantitative illusion spreads.

The exploited join up, count themselves, draw their conclusions. Fierce slogans make bourgeois hearts miss a beat. The greater the number, the more the leaders prance around arrogantly and the more demanding they become. They draw up great programmes for the conquest of power. This new power prepares to spread out on the remains of the old. Bonaparte’s soul smiles in satisfaction.

Of course, deep changes are being programmed in the code of illusions. But everything must be submitted to the symbol of quantitative accumulation. The demands of the revolution increase as militant forces grow. In the same way the rate of the social profit that is taking the place of private profit must grow. So capital enters a new, illusory, spectacular, phase. Old needs press on insistently under new labels. The productivity god continues to rule, unrivalled.

And when we stop counting we try to ensure that things stay as they are. If change cannot be avoided, we will bring it about without disturbing anyone. Ghosts are easily penetrated.

Every now and then politics come to the fore. Capital often invents ingenious solutions. Then social peace hits us. The silence of the graveyard. The illusion spreads to such an extent that the spectacle absorbs nearly all the available forces. Not a sound. Then the defects and monotony of the mis-en-scene. The curtain rises on unforeseen situations. The capitalist machinery begins to falter. Revolutionary involvement is rediscovered. It happened in ‘68. Everyone’s eyes nearly fell out of their sockets. Everyone extremely ferocious. Leaflets everywhere. Mountains of leaflets and pamphlets and papers and books. Old ideological differences lined up like tin soldiers. Even the anarchists rediscovered themselves. And they did so historically, according to the needs of the moment. Everyone was quite dull-witted. The anarchists too. Some people woke up from their spectacular slumber and, looking around for space and air to breathe, seeing anarchists said to themselves, At last! Here’s who I want to be with. They soon realised their mistake. Things did not go as they should have done in that direction either. There too, stupidity and spectacle. And so they ran away. They closed up in themselves. They fell apart. Accepted capital’s game. And if they didn’t accept it they were banished, even by the anarchists.

The machinery of ‘68 produced the best civil servants of the new techno-bureaucratic State. But it also produced its antibodies. The process of quantitative illusion became evident. On the one hand it received fresh lymph to build a new view of the commodity spectacle, on the other there was a flaw.

It has become blatantly obvious that confrontation at the level of production is ineffective. Take over the factories, and fields, and schools and neighbourhoods and selfmanage them, the old revolutionary anarchists proclaimed. We will destroy power in all its forms, they added. But without getting to the roots of the problem. Although conscious of its gravity and extent, they preferred to ignore it, putting their hopes in the creative spontaneity of the revolution. But in the meantime they wanted to maintain control of production. Whatever happens, whatever creative forms the revolution might express, we must take over the means of production they insisted. Otherwise the enemy will defeat us at that level. So they began to accept all kinds of compromise.

They ended up creating another; even more macabre, spectacle. And spectacular illusion has its own rules. Anyone who wants to direct it must abide by them. They must know and apply them, swear by them. The first is that production affects everything. If you do not produce you are not a man, the revolution is not for you. Why should we tolerate parasites? Should we go to work in place of them perhaps? Should we see to their livelihood as well as our own? Besides, wouldn’t all these people with vague ideas and a claim to doing as they please not turn out to be ‘objectively’ useful to the counterrevolution? Well, in that case better attack them right away. We know who our allies are, whom we want to side with. If we want to scare, then let’s do it all together, organised and in perfect order, and may no one put their feet on the table or let their trousers down.

Let’s organise our specific organisations. Train militants who know the techniques of struggle at the place of production. The producers will make the revolution, we will only be there to make sure they don’t do anything silly.

No, that’s all wrong. How will we be able to stop them from making mistakes? At the spectacular level of organisation there are some who are capable of making far more noise than we are. And they have breath to spare. Struggle at the workplace. Struggle for the defence of jobs. Struggle for production. When will we break out of the circle?

When will we stop biting our tails? 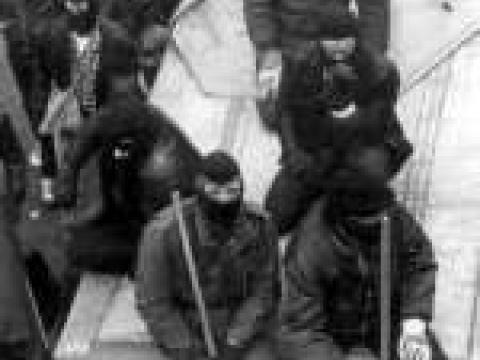 An article from the Workers Solidarity Movement examining the relation of anarchism to insurrection. 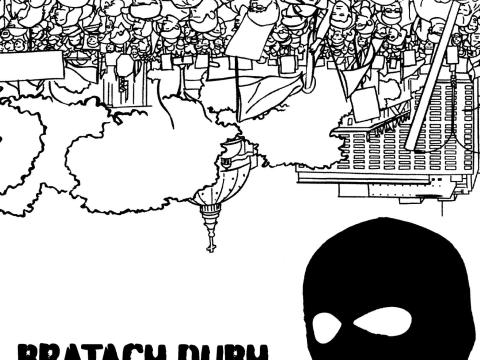