THE ABILITY TO SPONTANEOUSLY AND ENTIRELY IDENTIFY with any living object outside oneself is thought to be a special quality of nature-lovers and poets. It demands, so the romantic tradition would have us believe, an unusually sensitive person. Yet the intensity or capacity for response is not an adequate gauge for determining either the kind of response, or the success in externalizing it. We thus may have an intensely emotional person whose ability to go outside himself does not extend to the human world, perhaps the very nature-lover about whose identification with the wild flower there can be no question, but who may fail to offer assistance to his neighbour who lives alone, and is ill. The romantic's or sentimentalist's response is probably a manifestation of egocentricity, since there can be no reciprocity between the flower and the man — nor between the poet and his words; that is, the flower cannot love the man, nor the words the poet. This kind of identity, with that of a passive, or even non-living element must be regarded as different from humanism which involves the reciprocal love between men. Humanism must again be separated from that other kind of love to which the human responds more readily since it is heightened, and its true content obscured, by the prospect of immediate ego gratification— the love between parents and children, and between lovers. The degree to which this love functions is an individual and not a particularly social concern. Although the Eskimos, people who practise mutual aid to an almost alarming extent, feel that the personal realm is not separable from the social. Thus, an entire tribe will visit the home of a woman planning to leave her husband and spend days trying to persuade her not to. But since there are no coercive weapons aside from temporary social disapproval, and since each Eskimo has a secure and strong ego, the chances are that the tribe will not be successful in its attempted interference. However, this sort of social pressure, disinterested as it is, constitutes meddling. Meddling is related to, but may not be confused with mutual aid, and is not to be considered an inevitable concomitant of an ability to identify. In a small gregarious community both do exist, yet it is not inconceivable that a man would walk a mile to his nearest neighbour, help him with his work and not feel obliged to make unrequested suggestions about the upbringing of his children.

This ideal of mutual aid — from which we are far removed in our practice and concern alike-is for the radical and impressive social question. It is my belief — and it is a dour one, indeed — that there can be no mutual aid without identity. Occasionally, even in our society, individual behaviour may resemble mutual aid, but it will be inconsistent, and almost invariably motivated by special considerations. It is unlikely that it will do more than superficially resemble that quality of love and spontaneity which characterizes a community whose members think responsively in all inter-personal situations.

Before considering the matter of identity, please examine some of these special considerations that produce actions similar to mutual aid. These are of an abstract intellectual, rather than an instinctive psychological nature — and that is perhaps their fundamental failure, for whatever we may not know about identity, we do recognise its spontaneity.

The greatest error is, I suppose, the belief that the Golden Rule, "Do unto others … etc." equals mutual aid for the expectancy of reciprocity demands a situation where the same factors operate. To cite an example: a man lives in the hills of Ohio and is passing through the lowlands during flood time. Knowing his house is never in any danger from floods, how can he help the stricken people? Not by the Golden Rule, but only spontaneously. Floods and fires are generally pointed to as functioning examples of mutual aid, even in this society. Do these people help one another, as the only method of helping themselves? This is certainly proven negatively, where in cases of famine, another social emergency, and where the means of survival are not collective, but individual, the people will certainly not share their food with one another unless they live in a community that consistently — and not only in extreme situations — practises mutual aid — and mutual rejoicings. This last is possibly a necessary concomitant for the former. If you have had fun with someone you are more likely to be distressed by their sufferings. A perennial condition of misery evokes only pity, and once again, while pity is related to, it is not the sole inspirator of mutual aid. Another, and obvious consideration is social coercion; a fireman will sacrifice his life as part of his job. This has manifestly little to do with mutual aid. A policeman, a soldier, will do the same. Surely, anything less than identity is suspect as the motivation for mutual aid.

Given man's capacity for rationalization — and what greater capacity has modern man? — an intellectual approach to mutual aid is doomed to go up in a whiff of such rationalization. It would not be impossible, nor, indeed, very difficult for the individual to argue that each specific situation requiring his aid is a situation in which it is virtually impossible that he ever find himself. Actually, this is what does happen all the time. I believe that most men, despite the exhortations of the clergy, do practise "The Golden Rule" and with disastrous results — because to the concluding phrase: " … as you would have others do unto you" is added the mental reservation: "if you were others".

"If you were others" is the matter under investigation. How can the man who lives in the asbestos house help his neighbour whose house is on fire, or the man who has never known hunger, nor expects to, know what hunger is, so that he will feed the hungry? Since I do not believe that such knowledge is attainable either through abstract reasoning or the exercise of the imagination-perhaps because I think man's reasoning apparatus and his imagination such imperfect instruments — or even experimentally, for those who have been hungry do not invariably respond to another person's hunger, I have come to the conclusion that there are no certain criteria or correlations between a person's need, reasoning ability, possessions, etc., and his ability to identify with other people.

What factors, then, do produce this desirable ability? All that I am certain of is that there can be no mutual aid without the psychological need on the part of the practitioners to give that aid, and that this need or desire is spontaneously and non-rationally expressed. I do not know what limits on this aid there are; certainly there are no absolute cases, for even the instinct for survival is not always a limiting factor in the practice. The Eskimos are generally pointed to as violating their practice of mutual aid in the case of old people, who volunteer to starve when there is insufficient food to go round, but this is actually done very rarely, and with grave misgivings and profound despair on the part of the Eskimos. This, incidentally, is one of the best examples of mutual aid we know — which does not stop at suicide for the benefit of others. It suggests gratitude as a possible inspiration for magnanimity. An old person is less distressed, curiously enough, at the prospect of terminating his life, if that life has been contentedly and happily fulfilled. There is almost a biological relinquishing, as if to make room for others.

We know the following negative things: identity is not the property of class, sex or age. According to Dr. H. S. Sullivan, children under the age of ten are totally egocentric, and function in a semblance of a love relationship with their parents only in self-interest. If this is the case, and unfortunately Dr. Sullivan's evidence is painfully convincing, then young children are incapable of being part of our concern. It is only at the first homosexual chum relationship that identity manifests itself, and it is at this stage that we find, at least in this society, the most intensive and self-less love relationship that the individual often will experience, and it is in this euphoric state that one most closely approximates that condition functional as mutual aid. And it is in those societies (again the Eskimos — or the Trobriand Islanders) which are referred to contemptuously as childlike, and which remain in certain necessary aspects at this level, where we find the institution of mutual aid. We therefore draw the conclusion that this ability to lose one's self, be self-less, or identify is a natural, but socially repressed, phenomenon. Something in the composite pressure brought upon the adolescent, who is generally not in a conspicuously corrupted state prior to adolescence, alters, even to destruction of his capacity for selflessness. Occasionally this appears to return to some degree — but as I pointed out earlier, is confused with ego-gratification and hence, self-love, in his first mature love relationship. This, at first a personal problem, reverts to society's detriment. For the further lack, that of having no concern or love for man in all inter-personal relationships, which is the inevitable result of an incapacity to lose one's self by identifying with another, is of vast social importance, and like all social catastrophes, is produced not singly, by individual deficiency, but collectively, by social malpractices and coercion.

"It may be asked whether and how far I am myself convinced of the truth of the hypotheses that have been set out in these pages. My answer would be that I am not convinced myself and that I do not seek to persuade other people to believe in them. Or, more precisely, that I do not know how far I believe in them. There is no reason, as it seems to me, why the emotional factor of conviction should enter into this question at all. It is surely possible to throw oneself into a line of thought and to follow it wherever it leads out of simple scientific curiosity, or, if the reader prefers, as an advocatus diaboli, who is not on that account himself sold to the devil."

—BEYOND THE PLEASURE PRINCIPLE 1920.

Down there with Isherwood - Dachine Rainer

A review of Down There on a Visit by Christopher Isherwood, written by Dachine Rainer.

Do we Want Happy Children?

DACHINE RAINER who edited Prison Etiquette and the anarchist magazine Retort with Holley Cantine, from Bearsville, New York, is now living in London. Her novel The Uncomfortable Inn was recently published here by Abelard-Schuman and she is at present writing a book for the 20th Century European and American Writers series of Rutgers University Press. 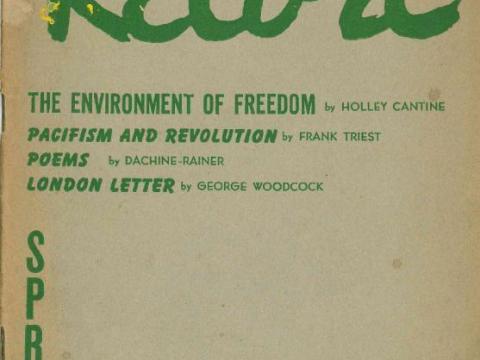 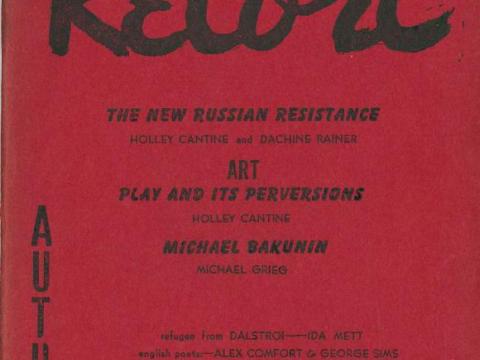