Currently the Reagan administration is trying to whip up national hysteria over drug consumption. Part of this hysteria is the effort to implement mandatory drug testing for all American workers. The administration's war on drug consumption presumes that drug abuse can be stopped by police and military repression. Drug abuse is treated as a social problem that can be eliminated through state-backed sanctions, rather than as a medical problem that requires medical treatment. Moreover, this war on drug consumption ignores the underlying causes of drug abuse and fails to distinguish between recreational drug use and serious drug addiction. Accordingly, children are being encouraged by Big other to turn their parents in for the heinous crime of smoking a joint. The government solution to drug abuse is firing workers who test positive on frequently inaccurate drug tests. Having already eliminated most health care services for workers, the Reagan administration patronizingly claims to be concerned with health. To quote Nancy Reagan, "just say no" to external control of your life.

Several large corporations are making a lot of money through mandatory drug testing at the worksite. One of these corporations is SYNTEX (U.S.A.).When I sent my resume to them, I had no idea what the corporation did. After talking with a headhunter in Pale Alto, I discovered that SYNTEX was a transnational pharmaceutical corporation. A few days before my interview, I talked with a friend who happened to work for a law firm that represents SYNTEX. My friend mentioned that SYNTEX was facing a large lawsuit in the United States as a result of the rather nasty side effects of its product ORAFLEX. Two days before my interview, I read an article in the San Francisco Chronicle that mentioned SYNTEX(U.S.A.) and PHARMCHEM as major urine analysis companies with corporate testing contracts. Well before my interview, I had decided that I was not going to be part of a corporation promoting mandatory drug tests and thereby promoting greater corporate control over all our lives.

As I drive over the Bay Bridge, I wonder why well-educated people would piss in a bottle for a job. My radio is tuned to KALX, which is blaring out a classic from the Avengers:

The thought of thousands of Stanford graduates pissing in bottles makes me eak into uncontrollable laughter.I arrive in Palo Alto thirty minutes ahead of schedule, drive into the second SYNTEX driveway, and park in a visitor parking spot. The SYNTEX complex consists of several large buildings arranged in a corporate campus with a park and duck pond. As I listen to MDC's classic "John Wayne was a NAZI," I watch the three-piece executives walking by. I also watch the blue-collar, security-badged types moving boxes of test tubes from building to building. The SYNTEX corporate environment resembles state socialism—completely controlled.

I walk from my car to the employment building." Hello, I'm Sarkis Manouchian. I have an interview with David Laidlaw." The receptionist looks down a list of names and checks mine off." Please fill out an employment application. Mr. Laidlaw will see you shortly." I read the application. On the last page I notice the following: "If the applicant is selected for a position, the applicant is required to Pass both a physical examination and a drug screening test. If the applicant refuses to take either test, the applicant will be withdrawn from consideration for the position in question." Then a tall blond man in his middle thirties, wearing a dark blue wool suit, approaches me.

DL: Hi, I'm David Laidlaw.
SM: Nice to meet you.
DL (smiling and looking at me): Would you like some coffee?
SM (also smiling): No, I'm fundamentally opposed to drug consumption, especially drug consumption on the job.
DL (confused): What? Well, come into my office and have a seat. I'd like to tell you a little bit about our company. Right now we have 11,000 employees at this site. In the next five years, we plan on expanding to 20,000 employees. We've already bought the land and have drawn up the plans. In 1985 we made over $150 million in profit. We have assets of close to one billion.
SM (looking at the SYNTEX management awards on the wall and the cluttered desk next to me): Can you tell me about some of your products?
DL (looking self-assured): Of course I can. In 1985 NAPROSYN was the fifth largest-selling pharmaceutical in the United States, with over two hundred and eighty-seven million dollars in sales. This year we released an anti-ulcer drug called GARDRIN in Mexico. We expect this drug to do quite well. If you join SYNTEX, you'll be joining a very stable corporation with a strong and diverse product line. You will not experience the ups and downs of other corporations in the Silicon Valley
SM (looking at David intently): Why wasn't GARDRIN released in the United States as well as Mexico?
DL: We haven't got clearance from the FDA yet.
SM: What percentage of SYNTEX's profit do you expect to come from urinalysis in the next five years?
DL (visibly upset and staring at the ground): Excuse me?
SM (looking directly at David): How much of your planned expansion is based on mandatory urinalysis tests?
DL (extremely nervous): I'm sorry I don't have figures on this subject. We do require all our employees to take pre-employment drug tests. All the big companies are moving in this direction. We believe it's in the employees' best interest to submit to drug testing.
SM (glowering): Why?
DL: Well, because there's a big drug problem in this area in particular and the nation in general. This is a very touchy subject. Some workers regard these tests as an invasion of their privacy. However, we believe something must be done to stop drug abuse.
SM: It seems to me that pre-employment drug testing violates the fourth amendment of the Constitution. I don't see how you can make drug testing a requirement for employment. Furthermore, if SYNTEX were truly worried about drug abuse, it wouldn't market drugs that haven't been fully tested. If SYNTEX were really worried about drug abuse among its workers, it would provide voluntary and free medical programs for them.
DL (coldly): Well, we think our president—President Reagan—is one hundred per cent behind drug testing. We don't think the Supreme Court will be rigid on this issue. Besides, urinalysis products are only small part of our product line. Thank you for your interest in SYNTEX. Let me show you the door.
SM (smirking): Did I get the job?
DL (smoldering): I'11 have to discuss your case with management! 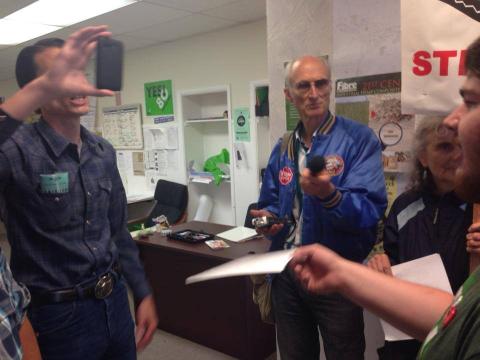 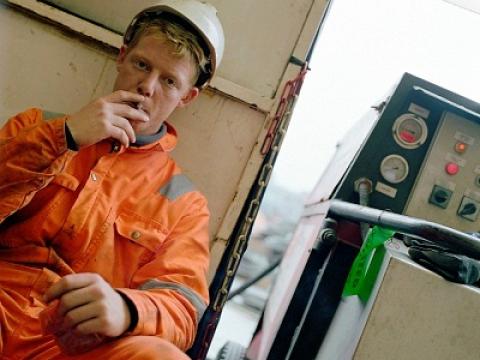 Once again, President Obama’s administration is standing in the way of pro-working class, civil…
Image 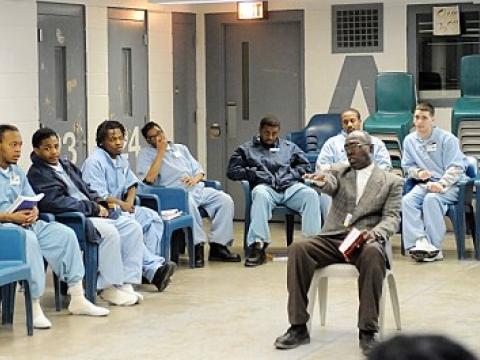 A critique of the role of prison treatment programs by an anarchist and ex-prisoner.