There lived in the Low Lands a rich king’s heir by right,

In a castle brave that everywhere was famed

Down by the Rhine, and Santen it was named.

A Roman city, like Cologne, it remained small and outwardly insignificant during the Middle Ages, while Cologne grew big and gave its name to an electoral archbishopric. But Xanten Cathedral looking out in splendid perfection far across the prose of the Dutch sand flats, and Cologne’s more colossal cathedral remained a torso. but Xanten has Siegfried and Cologne only St. Anno, and what is the Song of Anno [95] compared to the Nibelungs!

I came there from the Rhine. I entered the town through a narrow, dilapidated gate; dirty, narrow alleys led me to the friendly market-place, and from there I approached a gate built into the wall which encircled the former monastery court with the church. Above the gate, right and left, below a pair of small turrets, were two bas-reliefs, unmistakably two Siegfrieds, easily distinguished from St. Victor, the patron-saint of the town, who is to be seen above every house door. The hero stands in a closely-fitting coat of mail, spear in hand, driving the spear into the dragon’s jaws in the image on the right, and trampling down the “strong dwarf” Alberich on the left. It struck me that these bas-reliefs are not mentioned in Wilhelm Grimm’s Deutsche Heldensage, where everything else relating to the subject is collected. Nor do I recall having read of them anywhere else, although they are among the most important pieces of evidence for the local connections of the legend in the Middle Ages.

I passed through the echoing Gothic vaulted gateway and stood before the church. Greek architecture is clear, gay consciousness; Moorish is mourning; Gothic is holy ecstasy; Greek architecture is bright, sunny day; Moorish is star-spangled dusk; Gothic is dawn. Here in front of this church I sensed as never before the power of the Gothic style. Not when it is seen among modern buildings, like Cologne Cathedral, still less when it is built round with houses clinging to it like swallows’ nests, as with the churches in the North-German towns, does a Gothic cathedral make its most powerful impression; only between wooded hills, like the Altenberg church in the Berg country, or at least separated from everything alien, modern, between monastery walls and old buildings, like Xanten Cathedral. Only there does one feel deeply what a century can accomplish when it throws itself with all its might into a single, great aim. And if Cologne Cathedral, in all its gigantic dimensions, stood free and open to the gaze from all sides, like the church of Xanten, truly the nineteenth century would have to die of shame that for all its super-cleverness it cannot complete this building. For we no longer know the religious deed and so we marvel at a Mrs. Fry, who would have been a most commonplace phenomenon in the Middle Ages.

I entered the church; high mass was just being celebrated. The notes of the organ thundered down from the choir, a jubilant throng of heart-storming warriors, and raced through the echoing nave until they died away in the farthest aisles of the church. You, too, son of the nineteenth century, let your heart be conquered by them — these sounds have enthralled stronger and wilder men than you! They drove the old German gods from their groves, the led the heroes of a great age across the stormy sea, through they desert, and their unconquered children to Jerusalem, they are the shadows of hot-blooded centuries which thirsted for action! But when the trumpets announce the miracle of the transubstantiation, when the priest raises the glittering monstrance and the whole consciousness of the congregation is intoxicated with the wine of devotion, rush out, save yourself, save your, reason from this ocean of feeling that surges through the church and pray outside to the God whose house is not made by human hands, who is the breath of the world and who wants to be worshipped in spirit and in truth.

I went away shaken and asked to be shown the way to an inn, the only one in the little town. When I entered the inn parlour I could feel that I must be close to Holland. A quaintly mixed exhibition of paintings and engravings on the wall, landscapes cut into the window-panes, goldfish, peacock feathers and the ribbed leaves of tropical plants in front of the mirror clearly showed the host’s pride in possessing things which others do not have. This passion for rarities which in decidedly bad taste surrounds itself with products of art and nature, be they beautiful or ugly, and which feels most at home in a room full to bursting with such absurdities, is the Dutchman’s besetting sin. But what a shudder seized me when the good man took me into his so-called picture-gallery! A small room, all the walls densely covered with paintings of little value, although he claimed that Schadow had declared one of the portraits, which was actually much prettier than the rest, to be a Hans Holbein. A few altar pieces by Jan van Calcar (from a neighbouring small town) had lively colouring and would be of interest to an expert. But as for the rest of the room’s decorations! Palm leaves, coral branches and the like protruded from every corner; there were stuffed lizards everywhere, a couple of figures made of coloured sea-shells, such as one finds frequently in Holland, stood on the stove; in a corner was a bust of the Cologne Wallraf, and beneath it hung, desiccated like a mummy, the dead body of a cat, with one forepaw treading right on the face of a painted Christ on the cross. If my reader should ever stray into this one hotel in Xanten, let him ask the obliging host about his beautiful ancient gem; he possesses an exquisite Diana cut in an opal, which is worth more than his entire collection of paintings.

In Xanten one should not miss seeing the collection of antiquities in the possession of Mr. Houben a solicitor. It includes almost everything that has been dug up or found at Castra vetera. [96] The collection is interesting, but it does not contain anything of particular artistic value, as is to be expected of a military station, which Castra vetera was. The few beautiful gems which were found here are dispersed all over the town; the one piece of sculpture of any considerable size is a sphinx, about three feet long, in the possession of the innkeeper already mentioned; it is made of ordinary sandstone, badly preserved, and was never particularly beautiful.

I went out of the town and up a sandy rise, the only natural elevation for miles around. This is the mountain on which, according to the legend, Siegfried’s castle stood. At the entrance to a pine grove I sat down and looked at the town below. Surrounded on all sides by earthworks, it lay as it were in a cauldron, only the church rising majestically over the brim. On the right the Rhine embracing a green island with broad, gleaming arms, on the left the hills of Cleves in the blue distance.

What is it about the le end of Siegfried that affects us so powerfully? Not the plot of the story itself, not the foul treason which brings about the death of the youthful hero; it is the deep significance which is expressed through his person. Siegfried is the representative of German youth. All of us, who still carry in our breast a heart unfettered by the restraints of life, know what that means. We all feel in ourselves the same zest for action, the same defiance of convention which drove Siegfried from his father’s castle; we loathe with all our soul continual reflection and the philistine fear of vigorous action; we want to get out into the free world; we want to overrun the barriers of prudence and fight for the crown of life, action. The philistines have supplied giants and dragons too, particularly in the sphere of church and state. But that age is no more; we are put in prisons called schools, where instead of striking out around us we are made with cruel irony to conjugate the verb “to strike” in Greek in all moods and tenses, and when we are released from that discipline we fall into the hands of the goddess of the century, the police. Police for thinking, police for speaking, police for walking, riding and driving, passports, residence permits, and customs documents — the devil strike these giants and dragons dead! They have left us only the semblance of action, the rapier instead of the sword; but what use is all the art of fencing with the rapier if we may not apply it with the sword? And when the barriers are finally broken down, when philistinism and indifference are trodden underfoot, when the urge to action is no longer checked — do you see the tower of Wesel there across the Rhine? The citadel of that town, which is called a stronghold of German freedom, has become. the grave of German youth, and has to lie right opposite the cradle of the greatest German youth! Who sat there in prisons Students who did not want to have learnt to fence to no purpose, vulgar duellists and demagogues. [97] Now, after the amnesty of Frederick William IV, we may be permitted to say that this amnesty was an act not only of mercy but of justice. Granted all the premises, and in particular the need for the state to take measures against the student fraternities, nevertheless, everyone who sees that the good of the state does not lie in blind obedience and strict subordination will surely agree with me that the treatment of the participants demanded that they should be rehabilitated in honour and dignity. Under the Restoration and after the July days [1830, France] the demagogic fraternities were as understandable as they are now impossible. Who then suppressed every free movement, who placed the beating of the youthful heart under “provisional” guardianship? And how were the unfortunates treated? Can it be denied that this legal case is perfectly calculated. to show in the clearest light all the disadvantages and errors of both public and secret judicature, to make manifest the contradiction that paid servants of the state, instead of independent jurors, try charges of offending against the state; can it be denied that all the sentencing was done summarily, “in bulk”, as merchants say?

But I want to go down to the Rhine and listen to what the waves gleaming in the sunset tell Siegfried’s mother earth about his grave in Worms and about the sunken hoard. Perhaps a friendly Morgan le Fay will make Siegfried’s castle rise again for me or show my mind’s eye what heroic deeds are reserved for his sons of the nineteenth century.

On the History of Early Christianity - Engels

This highly original book presents a new theory of the origins of human culture. Integrating… 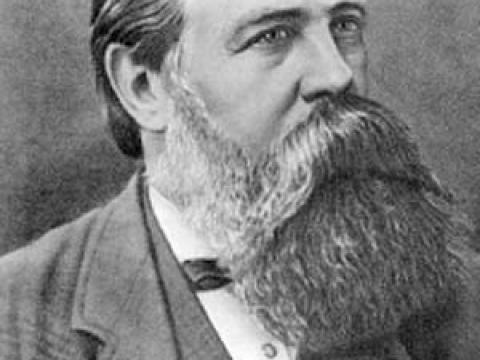 On the condition of the English working class - Fredrich Engel

Work by Engels before he met Marx. Not recommended reading, unless you hate Irish people. Reproduced…