In my reply to Ulli Diemer's two articles — Anarchism vs. Marxism and Bakunin vs. Marx — I confined myself only to correct the most glaring factual errors and distortions because the articles were largely irrelevant to the main principled issues involved in the debates between Marx and Bakunin. As far as I was concerned, my reply closed the debate because further discussion would serve no useful purpose.

Unfortunately, Diemer's reply in the last issue of The Red Menace (Winter 1979) instead of providing a solid base for discussion contains new factual errors and distortions. In justice to the readers, I must again ask you to grant me only enough space for a short and final rejoinder. I list the more important errors:

2) Mehring stated that there is a contradiction between Marx's analysis of the Paris Commune (The Civil War in France) and his opinions in Communist Manifesto (1848) and in writings written after the Commune. Diemer claims that Mehring misrepresented Marx's views, that there is no contradiction. But a reading of both the Manifesto and Civil War... as well as later writings (Anti-Duhring, resolutions of the Hague Congress of the International (1872), even the article titled Interview with Karl Marx in the same issue of the Red Menace fully sustains Mehring's remarks. Obscuring the issue by downgrading Mehring is a cheap debater's trick.

Mehring was not an opportunist. He was a revolutionist who together with his close comrades Rosa Luxemburg, Karl Liebnnecht, Clara Zetkin, and other revolutionaries fought against World War I and the reformist branch of the German Socialist Party. Furthermore, the chapter in Mehring's biography explaining Marx's Capital, was written by Rosa Luxemburg. Contrary to Diemer's assertion, Mehring was authorized to write his biography of Marx, not by the German Socialist Party, but by Marx's daughter Laura Lafargue.

3) No amount of doubletalk can camouflage the fact that Marx and Engels were misled by their fallacious theory of Economic Determinism to defend slavery as a progressive phase in the evolution of society and that this constitutes an endorsement of slavery — anti-slavery sentiments to the contrary notwithstanding.

4) It is crystal clear from Diemer's own quotation (prominently displayed in his article) that Bakunin's diatribe against Marx, Rothchild, and the Jewish bankers on the ground that the centralization of the state as proposed by Marx would be dominated by a "parasitic Jewish nation", predjudiced as it is, does not, as Diemer asserts, constitute an international conspiracy between Marx, Rothschild and Bismark. A conspiracy is a deliberate, planned alliance. Speculation about what might happen in the future does not constitute a conspiracy. An anology, however false or true, is not a conspiracy.

5) Quoting out of context is another debater's trick. Thus, Diemer quotes only extracts from Bakunin which back up his argument and deliberately omits quotations which decisively demolish his contentions. The quote omitted reads:

...while Marx is a democrat, an authoritarian socialist and a Republican, Bismark is an out-and-out aristocratic, monarchical Junker...the difference (between Marx and Bismark) is therefore very great, very serious... (considering) Marx's lifelong dedication to the cause of the social democracy ...there is no agreement or reconciliation possible between Marx and Bismark..." (Bakunin on Anarchy p. 315)

Bakunin's charge that ONLY the "out-and-out cult of the state", unites Marx and Bakunin, does not, in view of the above, quote, even imply the existence of a CONSPIRACY between both of these deadly enemies.

6) Diemer does not seem to grasp the vast difference between a political party bent on the monopoly of power and a movement whose sole purpose it is to forestall the usurpation of the Social Revolution by ...making it impossible for authorities, governments and states to be reestablished..." '

Diemer's example of Stalin (disciple of Lenin, the architect of the totalitarian state) far from negating Bakunin's position (outlined in my report) actually re-enforces his argument. Nor does Diemer's contention that Stalin did not hold public office until 1941 (while exercising de facto dictatorship at all times) invalidate Bakunin's points.

Diemer's diatribes do not provide an adequate basis for meaningful discussion of serious problems. I have neither the time not the inclination to continue this fruitless polemic. So be it.

P.S. Kropotkin NEVER "...alleged that Marx stole his economic theories from the anarchists..." He severely criticised Marx's Capital. There is no statement accusing Bakunin of conspiring to take over the International to be found on page 168 of Woodcock's Anarchism. I suspect that Diemer does not quote him because there is none.

The debates between Bakunin and Marx transcend petty personal squabbles and embody two diametrically opposed tendencies in the theory and tactics of socialism, the authoritarian and…
Image 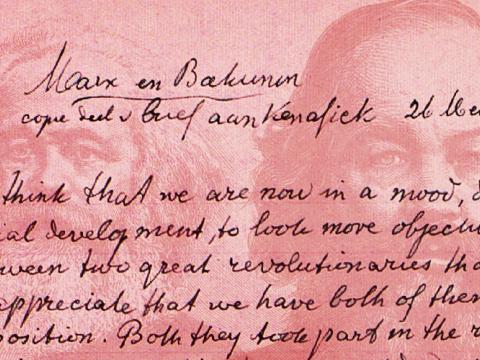 Anton Pannekoek's letter to Australian anarchist Kenneth Joseph Kenafick (26 May, 1949) on the differences between Marx and Bakunin, Marxism and…
Image 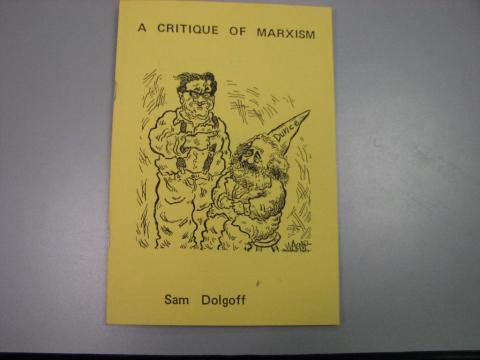 A critique of Marxism - Sam Dolgoff

1983 critique by Sam Dolgoff of Marxian theory of economic determinism, the state and Marxist views on the early socialistic labor movement,…