Information about various workers' struggles in and around Poland, including strikes by seamen, railworkers, car and telecoms workers in 2005.

Here is an update on recent struggles in and around Poland. More information in English can be found on a website run by the base-unionist ‘workers’ initiative’ from Poland: http://paspartoo.w.interia.pl/index.htm

Polish seamen on strike for eleven days in the docklands of Travemünde/Germany
In mid-March 2005 about 40 polish seamen went on strike after the management of the Norwegian shipping company Barber International had announced to cut their wages by 60 percent, not willing to pay the wages according to the German collective contract. Barber International organises the ferry traffic for the Finnish company Finnline Germany. The Polish workers struck for eleven days until the German industrial tribunal declared the strike as illegal. According to media reports the strikers were sacked after the dispute. The conflict has affected the ferry traffic between Finnland and Germany due to the ships of barber International blocking the container terminal. The dockers of Travemünde refused to unload the ships in solidarity with the Polish seamen. After about one week of industrial action Barber International announced to abandon the demand of wage cuts but refused to sign a Letter of Indemnity which would have guaranteed that no legal and disciplinary measures would be undertaken against the striking workers. After the decision of the German industrial tribunal, the wohle issue was resolved by placing the ships under the Finnish flag, and replacing the Polish crews with Finnish seamen. The Finnish Seamen’ s Union nevertheless denies that it helped break the Polish strike.

Protest at Isuzu Motors Poland
About 150 workers participated in the picket in front of the Isuzu factory in Tychy. On the 4th of February 2005 Isuzu Motors management Poland announced to fire 350 people, which would amount to over one-third of the total staff of the factory.

Polish telecom workers on strike after announcement of mass lay-offs
The management of the polish telecommunication company TPSA, a subsidiary of France Telecom, announced to sack 3,500 workers, which is around one worker out of ten. Since privatisation nearly 40,000 jobs had been cut. The polish unions called for a strike on the 11th of April 2005. The base union SUD in France expressed their solidarity in the usual union like fasion: ‘ SUD PTT Federation brings total support to the Polish colleagues. It asks the management of France Telecom Group to stop redundancies’ . TPSA declares that the planned strike will be illegal and strikers will be fired.

Warning strikes at Polish railways
In January 2005 several warning strikes took place at regional railway companies, protesting against the cuts in subsidies. The regional companies were founded after the dismantling of the state-owned Polish Railways (PKP). The PKP is still one of the biggest railway companies in Europe, only the French SNCF transports more people per year. The result of the re-structuring process is the reduction of tracks and staff, from formerly 300,000 employees to 200,000 today. In 1998 there was an attempt to fight back, but the nationwide strike ended without results. 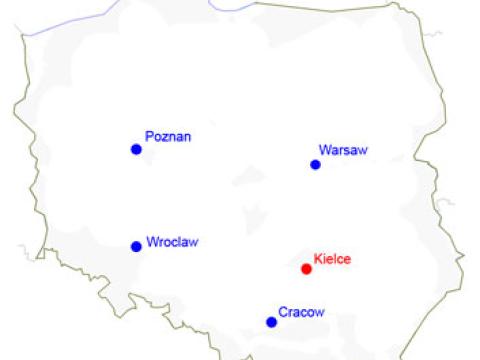 Bus drivers in Kielce have won their strike against privatisation.