Toiler’s Tales: Report from a Hospital Doctor in Japan

For more than a year now, nurses at the T. hospital here have been demanding repeatedly that the director show them a copy of their conditions of work. Thus far, they have been gently fobbed off with excuses like, "Well, the only copy we have is 15 years old, and rather out of date, so it would be quite pointless to show it to you. We are in the process of having a new one printed - wait a little longer please".

Since mid-February I have questioned the administrative chief at least four times on whether they weren't actually liable to be reprimanded by the Labour Standards Bureau for not providing copies of either the conditions of work or the wage structure: "Yes, indeed, the Bureau has also demanded that we make these things known. They're almost ready; two-three days - a week at the outside. Please be patient till then".

A month passed in this way. Meanwhile, I later discovered, the same people had been at work behind the scenes, trying to pacify the nurses: "You must realize that a hospital is a very busy place. Please stop encouraging Or Haguma!" was whispered in friendly undertones. Since the director (a former Japanese CP member) won't allow the 70-odd nurses to form a union, his talent for this kind of politicking reigns supreme in T. hospital.

"How has he been able to prevent the nurses from forming a union?" you might ask. Well, in the first place, all the responsible positions are occupied by the director's relatives. The nursing school, for example, is run by his wife. Lower down the scale, too, five or six members of his family defend the breach. His two sons work as hospital doctors.

In the second place, the nurses are split. The older and more experienced ones, living in this tradition-bound castle city for many years, are the double captives of giri-ninjo- ties of obligation and humanitarian feeling. They acknowledge the absolute control of the director: "We do not make any demands - but only because we fear his anger".

As for the young nurses, they have only two lives. One complaint is tolerated; a second, and they lose their jobs. The way of getting rid of them is quite simple. The nurses are originally recruited from the director's own birthplace: Oita, in far-off Kyushu, Western Japan. When it takes them on as student nurses, the hospital takes complete charge of them: "We will direct you in your daily life, as well as in your work", is the friendly reassurance. So, when any trouble threatens, a quick word to the parents, who come rushing to the hospital to see what's going on. Under pressure from both sides, the poor nurses have little choice: give up or shut up! "Because I felt I owed the hospital something for the two years' training it gave me, I stayed on for a few years; but the conditions are so bad that I'm going to quit before long!" is the unanimous sentiment of the young nurses.

Yet T. hospital still manages to carry on. Once again, the reason is simple: a constant store of replacements is kept, in the form of the "student nurses" - anywhere else they would be called junior nurses - who are made to work in return for a skimpy allowance. Along with the young nurses, they are simply products to be used up and thrown away.

Since the conditions of employment are unknown, the sum payable to a nurse who quits the hospital is equally mysterious. Several who left last year, for example, apparently had to come back five times to demand their dues. Even when it is forthcoming, the sum is often paid out on an instalment basis!

The hand-over-fist profit accruing from this situation has allowed the hospital to extend its buildings almost constantly. Last year, for instance, a senior nursing school was added. Incidentally, there was enough left over to build new houses for the director's two sons.

The director's autocratic rule at T. hospital, bolstered by his divide-and-rule policy, is complete. I can screw things up a bit myself, by going to the director himself to complain. But for the nurses, male nurses and other medical staff, it's quite different though. Unless they send their complaint through the "proper channels" - the chief nurse and the administrative offices - they face the director's anger. On the other hand, the "proper channels" are feared and hated just as much as the director himself, for they are linked to him by personal ties and ties of obligation: family connections, treatment of their own family's illnesses, their status in the hospital, the fact that other members of their family are also employed there, and so on.

The director's despotism is summed up in his two favourite remarks: "The age of democracy is dead"; "Mere talk gets you nowhere - if you want to get something done, do it!" Lately, the nurses, who're well pissed off with his power politics, are beginning to take him at his word. The mood for action is spreading. 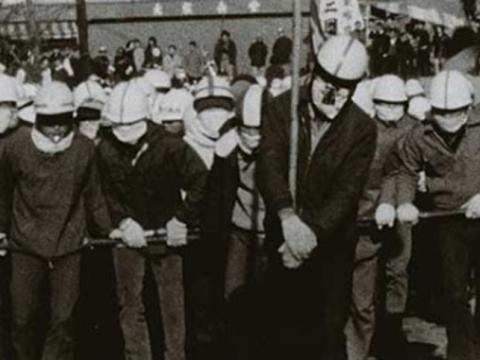 One of our intreped editors recently returned, with a running nose and a battered camera, from a weekend at Sanrizuka. There he took part in a support demonstration for the local farmers,…

Kõtoku Shüsui, whose name has become a kind of legend since the war (although in the country town where he was born, people still look embarrassed if you mention his name), was Japan's first real anarchist and the Japanese movement's first revolutionary martyr. At the time when Japan was launching its imperialistic programme, Kõtoku opposed nationalism and militarism despite the popular fervour aroused by the way…