As the new wave of state repression against Abahlali baseMjondolo (AbM) continues the Pemary Ridge Thirteen have been released but the Kennedy Road Thirteen remain in the notorious Westville prison. Bishop Rubin Phillip, who was Steve Biko's Deputy in the South African Student's Organisation in 1969, has called for their immediate release.

Grave Concerns about the Detention without Trial of the Kennedy Thirteen:

This Travesty Must End

After their 6th inconclusive bail hearing today, it is now abundantly clear that the legal process for the Kennedy 13 is a complete travesty of justice. They are scheduled to appear again on the 27th November. By that time, some of accused will have been in prison for 2 months without trial - two months in prison without any evidence being presented to a court and without a decision on bail. This is a moral and legal outrage that amounts to detention without trial by means of delay. In our view, it borders on unlawful detention. I am, tonight, issuing a call for their immediate release - justice has been delayed far beyond the point at which it was clear that it had been denied.

Ordinarily in a case with such serious charges as those put to the Kennedy 13, it is in fact extremely easy for bail to be denied. Usually all that is required is that the prosecution provide the court with some evidence showing that they have, at least, a prima facie case to make in the trial itself. That the prosecution has still not presented any such evidence, despite the magistrate's repeated concessions to give them more time to do so, indicates to us that the police simply have no case to make. What is being pursued in our courts in this instance is a political agenda against Abahlali baseMjondolo.

The Kennedy Thirteen were arrested in the aftermath of the September attack on Abahlali baseMjondolo in the Kennedy Road settlement. Abahlali baseMjondolo is highly respected for its courageous commitment to the equality of all human beings irrespective of their origins or position in society. Their recognition of the spark of the divine in every human being has been a prophetic voice calling us to conscience and grace in the moral wilderness of a country that is losing its way.

In April 2007 I visited the Kennedy Six in Westville prison where they held to a hunger strike for 14 days before the murder charges that had been trumped up against them were dropped. In November that year I, along with other church leaders, witnessed and denounced shocking police violence against Abahlali baseMjondolo.

In 2007 I had to put aside some of my exuberant faith in our new democracy as I came to understand that the days of police violence, police lies and wrongful arrest were still being used to silence those with the temerity to speak truth to power. I realised, with a heavy heart, that the days of the political prisoner were not yet over in our country.

The attack on Abahlali baseMjondolo, and the response to the attack by the police and some figures in the eThekwini Municipality and the Provincial Government of KwaZulu-Natal, have been met with grave concern across South Africa and abroad. It is patently clear that there was a political dimension to the attack and that the response of the police has been to pursue that political agenda rather than justice.

I, along with many other church leaders, as well as academics and human rights organisations, have called for a genuinely independent and credible inquiry into the attack on Kennedy Road. That call has not been heeded. It has become abundantly clear that the state has taken a political position on the attack and that it has forfeited any claim to neutrality in this matter.

The Kennedy Thirteen have come to court on six occasions to ask for bail. On each occasion a group of people, sometimes wearing ANC colours, some drunk and some armed, have been at the court to demand that bail be denied. The behaviour of these people has been appalling. They have openly made all kinds of threats including death threats. Clergy are amongst those who have been threatened and the apparatus of justice has been allowed to degenerate into what looks to all intents and purposes like a kangaroo court.

There were between thirty and forty clergy present at court today, all of us deeply disturbed by this travesty. We are all committed to see this matter through.

I am, tonight, issuing a call for the immediate release of the Kennedy Thirteen from prison on the grounds that justice has been delayed far beyond the point at which it was clear that it had been denied.

In light of the fact that this is quite clearly a political trial in which the rules that govern the practice of justice are not being followed, I am now calling for people of conscience outside of the state to join us as we set up an independent inquiry into the attack on Kennedy Road on 26 September; the subsequent demolition of the houses of Abahlali baseMjondolo members, the ongoing threats to Abahlali baseMjondolo members, the role of the police, politicians and courts in this matter.

The Lord will respond to the prayer of the destitute; he will not despise their plea. Let this be written for a future generation, that a people not yet created may praise the LORD: "The LORD looked down from his sanctuary on high, from heaven he viewed the earth, to hear the groans of the prisoners and release those condemned to death." (Psalm 102: 16 – 20)

All Charges Dropped Against the Pemary 13, But Someone Needs to Answer for Police Attacks

Abahlali basePemary Ridge is happy that all charges were dropped against 13 of our members, who were arrested in a brutal attack last Friday by the Sydenham police.

Abahlali has said, since 2005, “My lawyer is my neighbour.” In court today, the Pemary 13 were not represented by a lawyer, but by the Chairperson of Abahlali baseMotala Heights , Shamita Naidoo, who learned about justice through years of experience working in her community, and about the law seeing case after political case brought by police against shack-dwellers. Shamita spoke powerfully and with a lot of anger against the police violence so common in Abahlali communities, and in all shack settlements.

All the charges were dropped. But someone needs to answer for what happened last Friday night. If there was no case against us, why were we shot at, beaten, tortured, abused and detained over the whole weekend?

Why were we arrested, when it was the police who were committing crimes in Pemary on Friday night? Why does no one take seriously the fact that if you are a poor person the police are some of the dangerous criminals that you will ever have to confront?

The police are abusing us, and they are abusing government resources. Budgets for bullets, for cars, for lawyers, all were spent just to beat, shoot at and arrest shack-dwellers that committed no crime. The resources used to shoot at, beat and arrest innocent people could have been used to protect us. We as the poor are also getting robbed, stabbed and shot dead by criminals. We cannot afford private security. We need to be safe and yet all the police do in our communities is to torture and arrest us. Being poor has been turned into a crime. Being a poor person who doesn't know your place - who insists on your right to be political, to think and to speak for yourself - has been turned into an even bigger crime.

These cases take our communities’ resources too. These cases take energy, and poor people’s finances. The people, who were arrested, missed school and work. One of the arrested was supposed to write his Matric exam today. People who were injured have to pay for a doctor. Some of them could not go to work or school today. Those who come to court in solidarity must take off work and school, and pay for taxi fares. If you are beaten with your guitar and you are a person that loves to make music you will have to buy a new guitar. If your door is kicked in you will have to fix that door. All these resources are wasted just because of the police attacking us. A person can lose their job for missing even one day of work.

We all need to be safe and happy in this country, not just some of us, not just a part of us - all of us. This is our position and we will stick to it through all kinds of attacks. A person is a person whether they find themselves in a shack or in a big house with a fence and a burglar alarm and private security.

Matt Birkinshaw, a researcher from London, spent three months living in Abahlali baseMjondolo communities in Durban and Cape Town in 2008. This paper, prepared for a conference in Manchester, gives a brief but useful overview of the movement.

'Be a visitor, not a spy' - QQ Section, Site B, Khayelitsha

Matt Birkinshaw, a London anarchist, gives an account of his visit to the QQ shack settlement in Cape Town in diary form. QQ has recently joined the Abahlali baseMjondolo movement that began in Durban but now has a national presence. 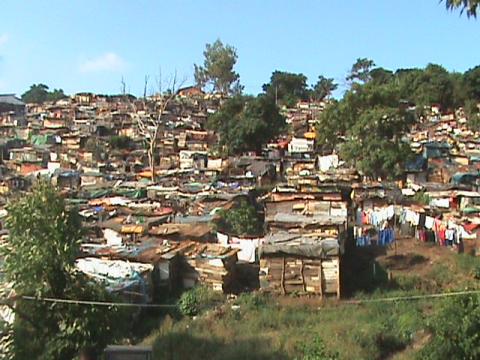 The ANC Has Invaded Kennedy Road