Approximately 12 fascists and 5 or 6 suspected accomplices are currently in a stand-off with Belfast anti-fascist protestors outside the BBC building in central Belfast.

Anti-fascists and anti-racist protestors gathered outside the BBC bulding to protest the upcoming appearance of the BNP on Question Time. The protest had been organised by Youth Against Racism (YAR).

Early reports do not indicate that any of the 12 fascists present are recognised or known. Outed fascist Neil House is not thought to be present. The move by fascists is a bold one and marks an increase in confidence most had hoped was long dead - this sort of counter-presence at an anti-fascist protest has not been known in central Belfast since the 1980's.

Prior to the protest, a YAR representative had said:
‘It is disgraceful that the BBC is offering the racist BNP a platform from which to put forward their lies. This party’s aim is purely and simply to stoke up racial tensions which they seek to exploit, by scapegoating immigrants and ethnic minorities for the lack of jobs and social housing.
‘Where they are given a platform, it gives confidence to racists and fascists to carry out attacks. We must fight to stop them being allowed to speak on Question Time. That is why Youth Against Racism has organised this protest, in solidarity with those campaigning on the same issue in England’.
‘We call on all young people, trade unionists and community activists to mobilise for this demonstration, and send the message loud and clear that we don’t want the BNP on our airwaves.’

Cheers for the update. Just fixed the tags quickly: anti-fascism and anti-racism to "fascism", and protests to "demonstrations". Also added location on the map. If you know the exact location something you can zoom down to the proper street or building if you have time as well.

The big problem was that the 12 fash were there first, that protestors arrived in dribs and drabs and that too few of them (and thankfully the fash) were up for getting 'stuck in'. Its clear that we underestimated them and in doing that we've actually made it more likely that they'll show up at stuff in future thinking that they will get little more response than a few snarls, abusive language, chants and hand gestures. Hopefully what wasn't lacking on the anti-fascist side was a bit of intelligence gathering and the one positive thing in all this is that it will hopefully help us identify more active fascists.

Possibility this may make the 10 o'clock news.

anything going on today, friday? keep us posted plz. thanks

we know you aren't, but that looks like a serious fishing message ;)

"we know you aren't, but that looks like a serious fishing message "

I should have elaborated; we were up in the big smoke for friday and saturday and thought if the protests were ongoing we'd go down and join in the solidarity, particularly if there was any sort of fascist presence.

send a postcard to a BNP member; 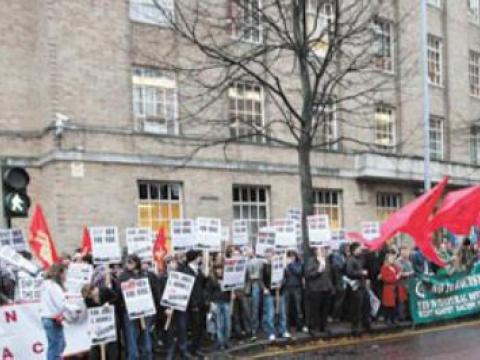 An Antifa flyer from the recent Belfast anti-BNP protests in Belfast.The recently formed Antifa Belfast had numbers at both protests mobilising…