150 South Korean protesters and bystanders have been rounded up by riot police.

Riot police in Seoul have stepped up their repression of the "candlelight demonstrations" in Korea, arresting around 150 people after a demonstration on August 15th. Police used water cannons filled with dye on the protestors, and used dye stains as a pretext for arrests. Due to the indiscriminate use of cannons, non-protesting pedestrians, shoppers and coffee shop customers were rounded up along with protesting workers and students. There are reports of riot police attempting to arrest plain-clothes police officers who had been hit.

Brutal violence accompanied the arrests, and journalists and human rights observers are understood to have been attacked by plain clothed and uniformed officers.

The protest was the 100th of its kind since May.

The demonstrations are part of a broad campaign against the self-declared “pro-capitalist” administration of president Lee Myung-bak, former CEO of Hyundai, whose trade reforms have run up against popular resistance and agitation. Opening up Korean markets to cheap US Beef imports, the government faced anger on health grounds (the import of BSE) and for its attacks on the living conditions of agricultural workers, peasants and farmers. The administration has spearheaded a broader assault on workers conditions, along with stepping up of domestic repression – arresting the heads of the bureaucratic unions in July for their role in organising a strike against the trade reforms, cracking down on assemblies, and vowing in 2007 to "get rid of" political and "hard-line" unions which stand in the way of “free market” developments. Lee has been accused of directly ordering the use of excessive force against the protesters. The corporate press has swung into line behind the administration, with the JoongAng Ilbo editorial of July 5th reading: “If anti-US beef protesters are really concerned about the health and rights of the public, they need to observe whether or not the order of our free market economy is being followed.”

Workers' militancy has increased recently as the result of the rising cost of living, stagnating wages, and the manoeuvres against workers broadly intensifying as a result of the current global crisis. Though class anger at attacks on living and working conditions is clearly a motivating force in the current unrest, the demands of the demonstrators show the dulling effect of bourgeois democracy on class demands. In the words of a report from the South Korean LCG:

The slogans of the April 19th Struggles in 1960, of the June Struggle in 1987 and of the struggles in June 2008 are the same ones: "destroy dictatorship!" and "government, retreat!". They contain the following demands: the destruction of Lee Sungman government which manipulated elections; the change of the indirect voting system into a direct one; and the retreat of president Lee who is responsible to sign up the beef contract without gathering and considering the public opinions. All of the demands are elementary ones considering whether the government keeps the formality and procedures of the bourgeois democracy.

Clearly, the legacy of 20th century working class struggles against the pro-US military dictatorship is having its effect on todays struggles: anti-American nationalism, the demand for “free” unions, protectionism and respect for civil rights are at the forefront of the fight. But it is precisely the retarding and dividing effects of the bureaucratic unions which have prevented workers fighting the attacks on them since the end of the dictatorship, their casualisation and defeat, and their integration into the liberal-democratic political process. The power of workers to destroy a military dictatorship was sidelined into constructing the liberal capitalism which was ruthless in its attacks on them, and with the turn away from protectionism it is imperative that they not line up with nationalist-protectionist factions of the ruling class and the labour bureaucracy, but fight for their own interests against capital.

Whether the repression of the existing struggles leads to further unionist accommodation an retreat or a development of struggle across workplaces, bypassing the unions, through the grassroots composition of the protests remains to be seen. 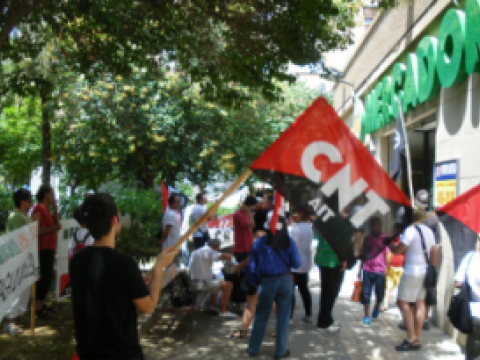 Last Saturday, the 10th of July, a large group of people demonstrated against Mercadona in Valencia… 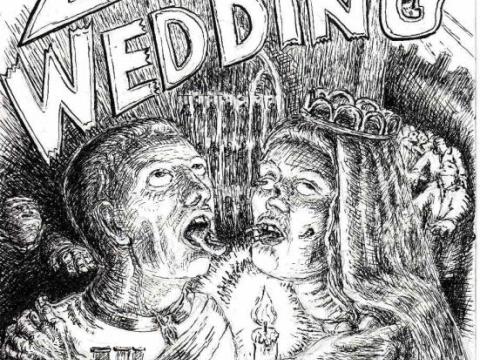 Camilla Power tells the story of her arrest for attempted street theatre on the occasion of the royal wedding. An edited version of this article… 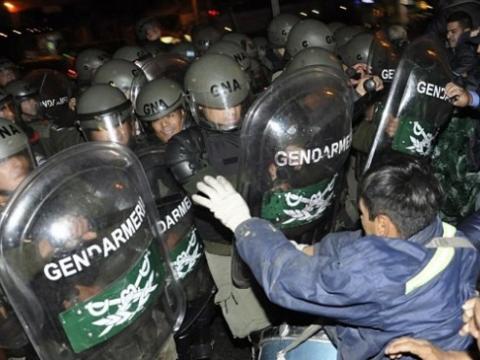 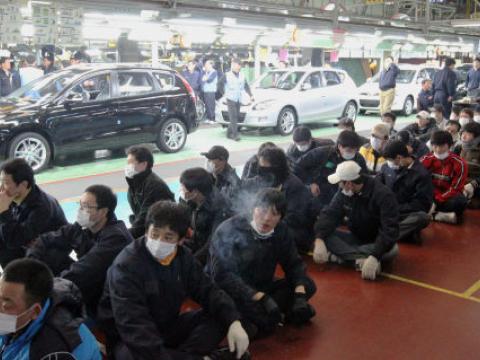