The ghost of May 68 still hovers above the international Radical Left, although the struggles which happened in Italy or in Portugal during the early ‘70s were certainly much more important. Therefore I am often obliged to explain to “foreign” comrades that France may not be the vanguard of the forthcoming world revolution...

25 March, 2006 -
.
Is France facing a new May ‘68 [when student protests eventually sparked a ten million strong general strike]?
Today (20 March), I would say no – but everything can change if the working class (and especially the private sector workers) starts to move. Tonight the unions rejected a general strike in favour of a “day of action” in a week’s time – a perfect technique to bury the movement.
There are a number of differences with 1968.
Students are divided about their methods of action. Not all those who oppose the CPE approve the occupation and blockading of the universities. The media and the Right are attempting to convince the more moderate anti-CPE students that these forms of direct action are not good because only a minority of students participate and voting is public; and because the poorest students will be most affected if they miss lectures, exams, etc.
The strikers say that the only way they can encourage students to come to the general assemblies, discuss and take part in voting is to blockade the universities (this is also true of the secondary schools). The students also want to involve their lecturers and teachers. Obviously, if they were engaged in a general strike, the university system could not function.
Another difference is that in 1968 only 12% of young people had the “baccaulauréat” (end of secondary school exam). Today 70 % have the baccalauréat. So the danger of being integrated into the so-called middle classes is very small; but the risks taken by the students are much greater.
In 1968, the Far Left, anarchists and all sorts of libertarians succeeded in dominating the student movement. They could talk for hours about revolution and be taken seriously, or at least not be seriously contradicted. They did not call for university reform: they wanted the disappearance of the university system, the end of the division of labour, and so on. They had an anti-authoritarian rhetoric and at least struggled to control the content of the classes, to introduce revolutionary pedagogical methods, to organise alternative classes. As they said, they did not want to be the “foremen” of the capitalist class.
Almost 40 years later, sections of the Far Left have become notorious for their ability to manipulate general assemblies and use movements for their own political aims. Already, by the mid-1980s, it was obvious that radical students were no longer criticising the ideological content of their curriculum, did not mind about of the reactionary pedagogy of their teachers. They did not want to change society and were looking for good jobs. They wanted more grants, more teachers, bigger classrooms, etc.
But there was something positive and new: they did not want to be manipulated and they have tried to create democratic procedures in the general assemblies, even if this has not always succeeded. They created “coordinations” which were supposedly independent from the parties and trade unions.
The National Student Coordination meets in a different town each time, and the number of delegates has doubled in size, from 200 to 400. The delegates are not always elected in the most democratic way and are the results of compromises between various political forces, the student unions and the independent students. In other words, the delegates are more often chosen than really elected by the general assemblies.
The coordination of Poitiers, for example, has withdrawn from the National Coordination because it strongly criticizes its internal democracy.
The demands of the national coordination concern not only the CPE, but also a general amnesty for all the persons condemned in the November 2005 “riots,” the repeal of all laws promoting casualization, etc. The university students are trying to build links with high school students but also with groups of precarious workers.

It’s impossible today to talk about Situationist group in France but there are obvious strong “anti-organization” feelings in the student milieu. Today, in France, one uses much more often the words “pro-situs” or “post-situs” than “situs” (abbreviation for Situationists). There are different minute circles which pretend to continue the Situationists’ efforts (mainly on paper), but what is most striking is a more confused and vague influence of situationism or post-situationism among anarchist sympathisers and rebellious students who just want to do something and are fed up with everything capitalism “offers” them.
To sum up the elements of this confused and heterogeneous spontaneist ideology, which is partly influenced by the Situationists, I can quote:
* the primacy of the satisfaction of individual “desires” (today, struggles must be “festive,” a permanent joyful activity, a feast),
* the illusion that one can build isolated alternative islands inside capitalist society (communes, squats, etc.) which would make it possible to transform inter-individual relationships (a direct return to the ‘60s),
* the permanent denunciation of the leaders of the extreme left and permanent contempt for rank and file militants, considered as alienated individuals and potential bureaucrats,
* the defense of so-called exemplary actions, street fighting, stealing and plundering with no analysis of the relation of forces and their legal consequences for the individuals concerned when they are caught by the cops and condemned to heavy jail sentences,
* an underestimation of the role of the working class which goes together with a glorification of an abstract revolt of the undifferentiated masses, the “precariat” being a sort of vanguard replacing the working class,
* the refusal to think about the construction of political organizations regrouping those who not only “desire” a social revolution but want to prepare it concretely,
* the illusion that one can build another world at once, without any transitional stage,
* a frequent contempt for demands, because material demands are seen as the expression of a will to kill social movements,
* the refusal to participate in the “coordinations” (non-trade union groups organized for a specific student or even workers struggle). These coordinations are considered as a nest for future bureaucrats. At the same time the partisans of “autonomy” want to build alternate “autonomous” bodies. The result is that the coordinations remain in the hands of the reformists, Stalinists and Trotskyists, and the official student trade unions appear as being representative of the mass of the students even if they are, in fact, bureaucratic grouplets.
* A confused opposition to democracy and democratic procedures (voting, even raising hands in an assembly, is already considered as a betrayal)
* The myth of May 68 as a wildcat general strike (if it’s true the trade unions did not call a general strike, at the same time they bureaucratically organized the occupations of most factories; the mass of the workers occupied neither their places of work nor their neighborhoods in May-June 1968: and the young workers went to the universities, or to the local action committees or to the demonstrations, to have some fun fighting the cops).
* The myth of November 2005 described as an “insurrection”
* The romantic and falsified presentation of so-called “street fighting.” In fact, these so-called fights mainly consisted in throwing some rocks and then running away as quick as possible in order not to get caught by heavily-equipped cops (today a cop needs ten minutes and the help of a colleague to put on all the elements of his equipment!).
* The manipulative theme of a nuclear or ecological apocalypse: during the Cold war, the nuclear threat was used as a supposed stimulus to push people to act against capitalism; today there is an additional apocalyptical menace: the ecological threat. This propaganda about capitalism’s barbarism has positive effects but also potentially negative ones: it may reinforce individualism and individual solutions (from mysticism to cynical attitudes towards climbing in the social scale: after all, if the world is going to disappear soon, why should not I take advantage of everything offered to me right now?) It can favor terrorist actions supposed to wake up the “alienated” masses; or it can lead to the illusion of creating a counter-culture or a counter-society.
* The abstract support to the small minority of suburban kids (a few hundred) who attacked isolated students on the sidelines of the mass student demonstrations in 2006. This abstract support is much more linked to the “white man’s guilt complex” than to any concrete action of solidarity and political work with the “banlieue kids” on a day-today basis. Those who defend this position justify their support by saying that the small groups who attacked the “petty bourgeois” demonstrators were victims of racism and came from the suburbs. The problem with this fairy tale is that it covers up the reality that tens of thousands of young kids from the working class suburbs and of all national origins demonstrated inside the student demonstrations!
* The combination of many of the above quoted ideas may lead to a false appreciation of what happened during and after the anti-CPE struggle; this is why people like the Situationist Ken Knabb can write that thousands of people continued the struggle after the CPE was suppressed; that workers in some places were starting to escape to the control of the trade unions; and that there was a solidarity movement between the students and the workers, retired people, migrants, jobless and precarious people. All these minute-scale phenomena – unfortunately – are presented in such an exaggerated and, at the same time, vague form that they offer a fantasist vision of what happened in France. (2007

A statement issued by a group of General Assemblies, aimed at analysing the movement and helping it to progress.
Image 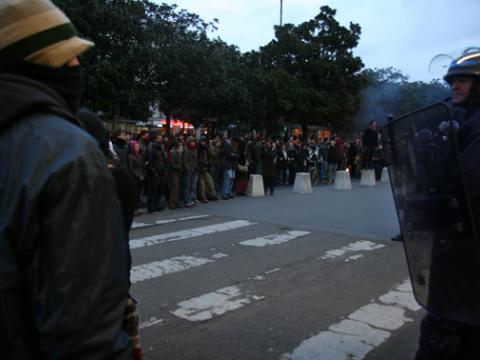 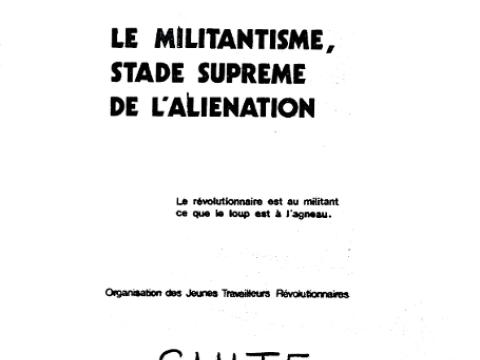 Published in France 2 years after part 1, part 2 puts part 1 in into the political context it was published in and expands on its themes.